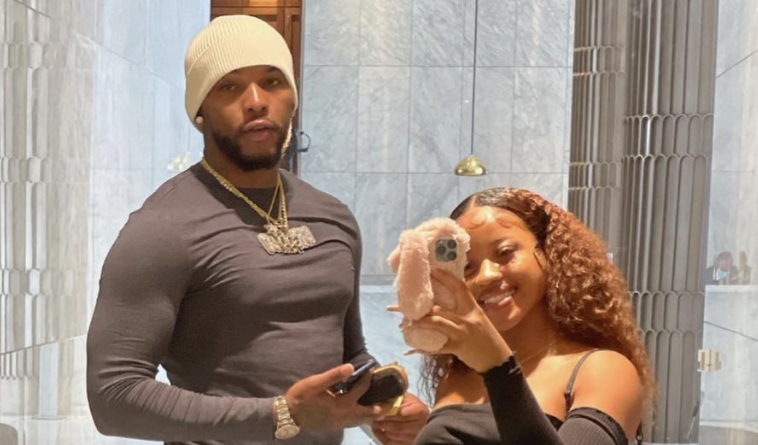 Earlier this week, Chicago rapper 600 Breezy shared that he, unfortunately, lost his girlfriend Raven Jackson to an apparent suicide. He took to social media to share a few posts to express his grief while sharing some personal videos and photos of him and Raven during their relationship. One of the posts he shared were text messages showing that Raven had texted him about what she had been battling internally.

The post implied that those were messages sent to him from Raven before she took her life. However, on Thursday, he made an edit to the caption of the post that was initially shared, and clarified that the messages he shared were from a month ago, and not Raven’s final messages to him directly before her passing.

In the edit to his caption, Breezy said,

“THESE WERE NOT OUR LAST MESSAGES!! THIS IS JUST ONE OF THE MANY TIMES LAST MONTH THAT I HAD TO STOP HER FROM. I JUST NEED YALL TO FEEL AND UNDERSTAND HER SO THIS CAN STOP HAPPENING, I’M DIEN I WASN’T THERE FOR HER BUT YOU CAN BE THERE FOR YOUR LOVED ONES.”

His clarification about the text messages came after a woman claiming to be Raven’s cousin spoke out about his post.

I’m calling bullshit to this. And I’m ready to go on the record. What’s the date on these bullshit text messages? This mfer trying to come up off of my cousin’s death. Why is the date important? Because her momma just called the cops in Alabama THIS MORNING for a wellness check https://t.co/TPyj8ylc8V

The woman also continued to say that Raven’s death remains under investigation.

I’m not finger pointing at anyone nor am I denying that my cousin battled with her mental help, but I can not say this any louder for the people in the back that her death remains under investigation.

As previously reported, when originally sharing the messages, Breezy pleaded with his followers to take mental health seriously.

He said, “Please when your loved ones are showing signs of any mental damage or health please take them serious. This is real. This is what she left m with. And [I’m] supposed to be able to continue to live?????”

We are continuing to keep Raven’s loved ones lifted in prayer during this difficult time.

The World Wants No Part of Woke, but It’s Glad We Do