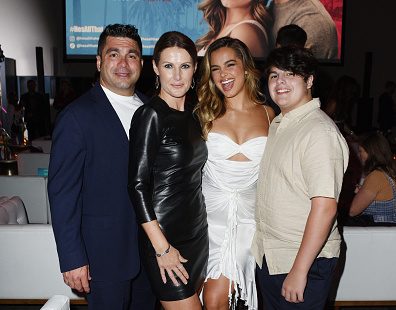 TikTok star Addison Rae’s mom, Sheri Easterling, is speaking out on her messy marital drama with her husband, who was caught cheating with girls nearly half her age in a very public breakup.

Easterling, an Instagram influencer in her own right and mother to Rae, 21, and sons Enzo, 14, and Lucas, 8, with Lopez, 46, said that her main concern was making her children “feel secure and safe” and to assure them that “everything will be okay,” she wrote in a recent Instagram story.

The 42-year-old made the social media post after Page Six interviewed her husband’s 25-year old mistress, Renee Ash. Easterling’s husband, Monty Lopez, reportedly cheated on her for five months with Ash before the news came to light this week.

“Personal matters being brought public are always challenging and overwhelming for anyone involved,” the mother of three, 42, wrote in an Instagram Story on Thursday. “I will be okay. My biggest concern is -and always will be- my children and their fragile hearts and minds. I will always do my best to protect them.”

Husband Misled Mistress About His Marriage, Introduced Her To His Mother

Ash says Lopez completely misled her regarding his marriage to Easterling, telling her that they were in the process of getting a divorce and were living apart.

Lopez reportedly took his mistress to meet his mother and younger brother, she told The Post.

“Unfortunately, he misled me on his marriage, he lied to me,” Ash told us, claiming that Lopez told her his marriage to Easterling was over when it wasn’t.

“He told me that we were going to be together and have babies together,” she went on to say. “He even introduced me to his mom, his youngest brother and I thought we had something real. He told me a story of his marriage that convinced me that they were apart and in the process of getting a divorce.”

Ash said she dumped Lopez earlier this week after several other women came forward saying he had hit on them, doing so over FaceTime on at least one occasion.

And to make matters worse, damning video (footage in Instagram post below) emerged on Wednesday of Lopez allegedly touching a woman’s backside. The viral clip, originally posted by TikTok user @marlig_, shows a young blonde woman as she loudly states, “Addison Rae’s dad is trying to f*** me, I swear to God,” before a man reported to be Lopez touches her butt.

Ash went on to apologize to Easterling and her family, telling The Post that her “heart broke” after learning about Lopez’s behavior with other girls.

“I loved him and I believed him. When I found out about the other young girls, my heart broke,” she said.

“I am so sorry if anything I have said has hurt his family any more than he already has. And I am also sorry that he has hurt me so deeply that I believed we were in love.

Addison and Sheri don’t deserve this and neither do the other girls he’s disrespected. I hope telling my story sheds light on a man who has gotten away with their power in the industry for too long.”

As of Friday, Easterling removed “wife” from her Instagram bio while Lopez’s still includes “Husband to @sherinicole.” The two married for the first time in 2004, before divorcing and remarrying in 2017.

Meanwhile, Addison Rae unfollowed her father after his scandalous behavior came to light this week, and thanked her followers on Wednesday for their support as the story made its way through social media.

Rae was named the highest-earning TikTok personality by Forbes and made their “30 Under 30” list for social media influencers last year.

The Universe, Created by Chance or by God?