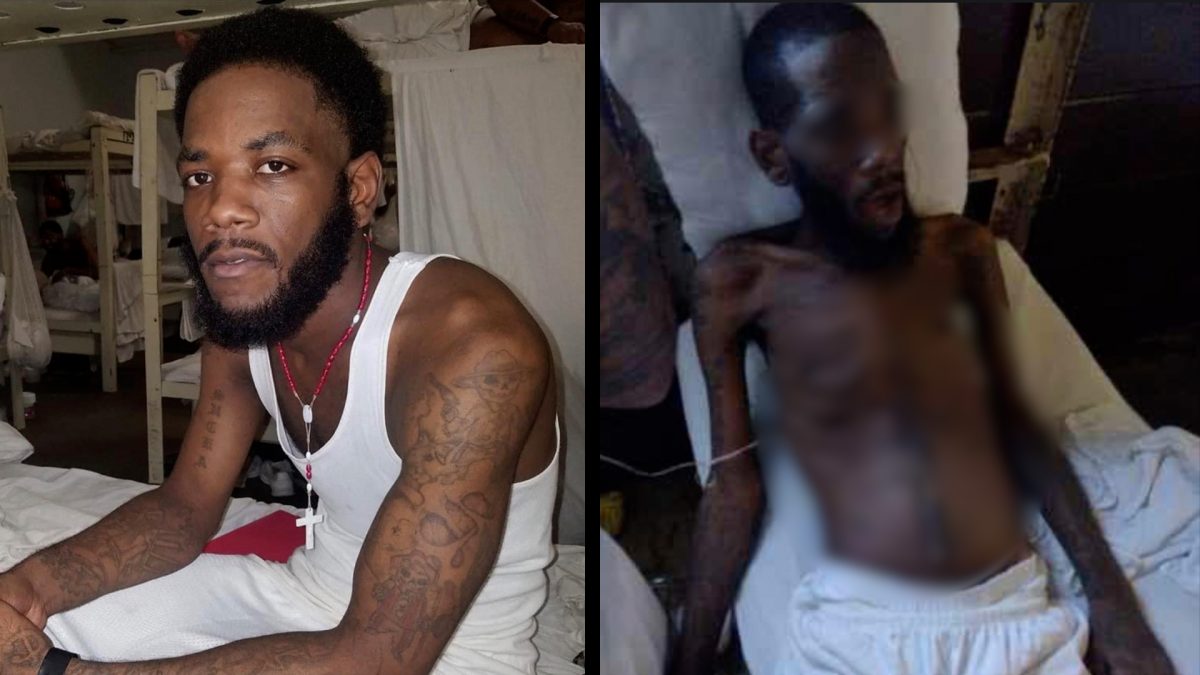 Photos of a Black man went viral after he was neglected and left for dead in an Alabama prison. Kastellio Vaughan was exposed to deplorable conditions, and lost almost 75 pounds due to infection following a surgery he received at the Elmore Correctional Facility medical center.

Vaughan’s family claims that they received calls and photos from another inmate who was concerned about his rapidly declining health condition.

They immediately began contacting the prison with their concerns. In a recent statement, the Department of Corrections claimed that Vaughan refused medical attention and medication which led to his rapid decline.

However, the Vaughan family insists that Kastellio’s constitutional rights were violated and that the prison should be held accountable. They’ve also hired a lawyer and are taking legal action.

Are the conditions of the Alabama prison system to blame here? Or is there more to this story than meets the eye? The Shade Room investigates…

Vaughan was sentenced to 25 years in prison for unlawful breaking and entering and first-degree robbery, but his family says that’s no excuse for the deplorable conditions and treatment he’s received at Elmore Correctional Facility.

In August, Vaughan got part of his small intestine removed, but less than 30 days later, he was overtaken by infection. He went from a normal 200 pounds to a shocking 75 pounds.

His sister, Kassie Vaughan, posted photos of her incarcerated brother on Facebook, showing him completely malnourished and unable to walk or stand on his own.

That post ended up going viral, receiving nearly 20,000 retweets and nearly 8,000 likes as of this article’s publication.

WARNING: The photos and videos below are graphic.

“They just had him there sitting in general population,” Kassie told TSR Investigates’ Justin Carter. “And he’s looking like a zombie.”

In early August, Vaughan reportedly called his family weeks before the surgery complaining about stomach issues.

Days later, they got a call from another inmate to let them know their older brother had been taken into surgery at the prison’s medical facility.

The surgery stemmed from complications arising from a gunshot wound Vaughan had suffered years back.

But things quickly took a turn for the worst post-operation, and the family took to social media and caught the attention of renowned defense attorneys Ben Crump and Lee Merritt.

“Those pictures are very alarming,” Merritt told The Shade Room. “Those pictures reveal someone who is obviously in crisis and who was in need of immediate medical attention. Since he returned to custody, the infection that he suffered, his inability to consume food, rapid deterioration, loss of body weight.”

Merritt is now one of the lead attorneys on the case, saying “he had repeatedly requested for help, medication, feeding intravenously, any kind of help he would have received he wouldn’t have turned down.”

The Alabama Department of Corrections attempted to change the narrative and sent out a media advisory late last month claiming Vaughan had refused followup medical attention and “opted to be discharged against medical advice on August 10.”

The press release, which stated Vaughan had been readmitted several times for complications following the surgery, also said he signed a waiver to release his medical history, to which his sister said was a complete lie.

“Wow. THIS IS A LIE! Alabama Department of Corrections you all have now violated my brother Hippa Violations. He never signed any waiver. If that’s the case he would have let me get his medical reports/history. He is not in the correct mental state to sign anything.”

The department went on to say that they “offer medical assessment and treatment to all inmates but does not force them to accept treatment.

The prison system in Alabama has been under scrutiny for years now. The Shade Room obtained court documents from 2019 that showed the Department of Justice sued the Alabama Department of Corrections for allegedly violating the U.S constitution.

“Alabama’s prisons for men have remained extremely overcrowded, (and) prisoner-on-prisoner homicides… and sexual abuse have increased,” the lawsuit reads. “The physical facilities have remained inadequate, use of excessive force by security staff remains common.”

And there’s video to prove it.

One clip sent to an AOL.com reporter earlier this year shows an inmate at the Elmore correctional facility on the roof of a prison building seemingly in distress.

A corrections officer can be seen pulling the inmate off of the ledge before beating him.

Prisoners Across The State Strike On Prison Jobs In Protest Of Conditions, GoFundMe Set Up For Vaughan’s Family

And it’s not just Elmore either. An hour away at the Bullock County Correctional facility, video shows inmates languishing in similarly dilapidated conditions.

Prisoners across the state have started a strike on their prison jobs in an effort to bring about change to the Alabama prison system.

A GoFundMe has since been organized by Vaughan’s sister, which has raised $52,583 out of an initial goal of just $12,000. Those wishing to donate can do so here.