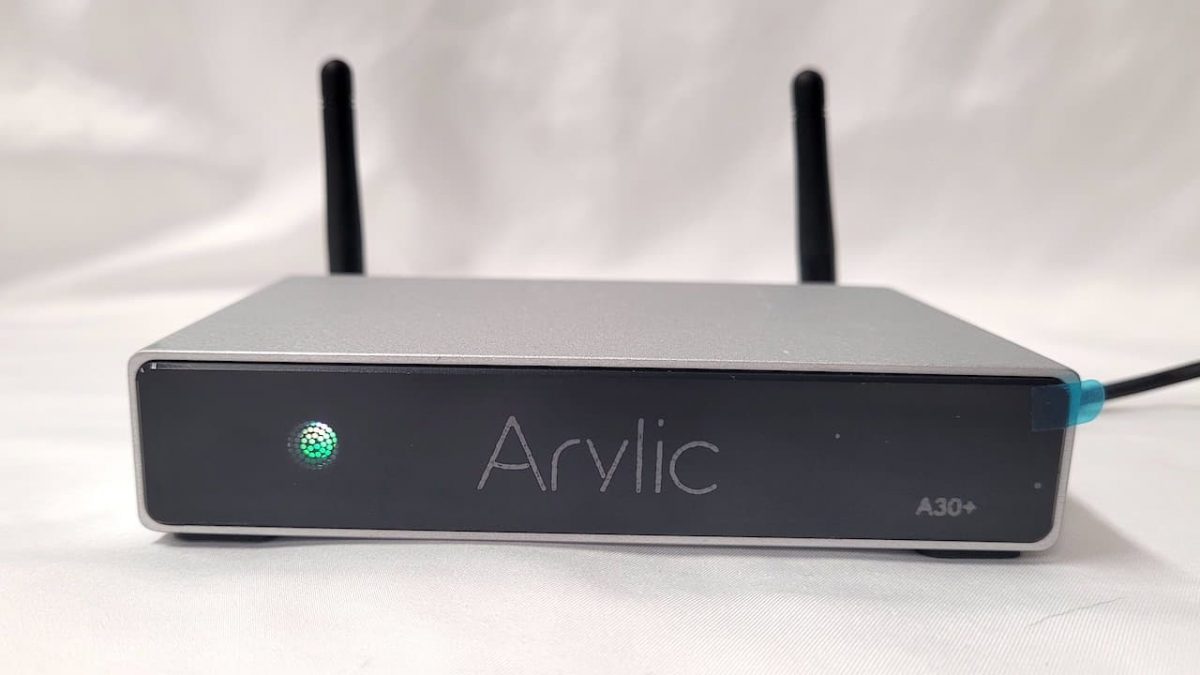 It has been almost twelve months since we reviewed a trio of Arylic Streaming Amplifiers and their 4Stream app. There were a few issues with each product but the overall performance for the money was quite good. These are all very capable products that are not expensive.

There is clearly a market for affordable streaming amplifiers and streamers based on the popularity of the Bluesound NODE, and Raspberry Pi-based streamers. If you don’t mind the DIY route, you can save a lot of money and the performance can be remarkably good.

The Arylic A30+ model is the latest generation of their products and there is also a new ACP Workbench tuning tool that we decided to play with as well.

The A30+ is the little brother to the A50+ and offers support for Bluetooth, Wi-Fi, 3.5mm inputs, and a 30 watts/channel class D amplifier that is designed to work with high sensitivity loudspeakers.

Power is provided by an 18V 4A DC Power Adapter; the A50+ shipped with a 24V block which is not interchangeable with the A30+.

What’s in the Box?

The A30+ uses an ESS series DAC and TPA3116 amplifier circuit which provides clean sound and good detail. Used as a USB DAC from a PC or laptop, the A30+ operates as a 16-bit/44.1kHz PCM DAC.

You will certainly get the best results using either the Wi-Fi or USB DAC.

The supplied remote offers basic functionality; volume control, mute, input switching, forward/back, presets, and a mix of EQ settings. The EQ is rather rudimentary; there are basic bass and treble sliders which provide rather coarse adjustments.

The 4Stream app was the main focus of my initial review as it combines many of the source options in one convenient package and allows control of multiple units from a single screen.

As a multi-room system, the app allows all units to play the same source or each unit can operate independently with a different source used with each device. The list of sources available is impressive; the USB port will accept an external HDD or thumb drive which can be used outside of a network. There is also DLNA support which allows you to stream from your own library on a NAS or other devices.

Arylic have updated the app to include support for TuneIn, Internet Radio, QQFM, iHeart Radio and a much wider range of streaming apps; Amazon Music, Spotify, TIDAL, Qobuz, Deezer, Napster, and QQ Music.

Bluetooth connectivity allows you to stream any platform from your smartphone or tablet.

The A30+ is device agnostic with support for Android, iOS, Windows, Linux, and AirPlay.

Multi-room systems from Sonos or Bluesound will cost more and you are tied into their loudspeakers.

Software platforms like Roon might offer a slicker presentation and an easier way to integrate TIDAL, Qobuz, and home ripped CD collection on an HDD — but it doesn’t offer support for as many platforms and the annual charge (if you do not opt for the lifetime fee) is not inexpensive.

One could outfit an entire home for under $1,500 with 4 pairs of passive loudspeakers.

The only add-on is the new ACP Workbench application which is an additional $20 USD per PC it is installed on. The new application is worth the expenditure as it adds a full parametric EQ and DSP to supported models.

Not all of the Arylic lineup supports the ACP Workbench so be sure you have a supported model before buying the add-on. At the time of publication, the S10 and S100 pre-amplifiers, and A30+ and A50+ amplifiers support workbench as do most of the DIY add-on boards.

For those using the ACP Workbench with DIY boards, there is also an option to remap some of the pinouts.

The EQ, DSP settings, and gain can be independently configured for each channel giving users maximum flexibility regardless of the loudspeakers on the other end; you can adjust each system based on the speakers and room.

I loaded the software on my Windows 11 laptop and entered the product key; both the software and key are provided in an email after purchase.

The entire range of settings will not appear until a connection is made from your source device to the A30+ via the micro-USB port.

Once the device is connected, all the settings options are activated and the user has a full parametric EQ available, along with gain settings per channel and a series of other DSP corrections.

As can be seen in the accompanying screenshots, the app is quite technical and figuring it all out will likely take me some time. The Arylic forums have good discussions regarding the use of the new app and may be able to help should you get stuck.

I tested the unit with the same JBL Studio 220 bookshelf loudspeakers I had previously used because they are rated for 20-125 watts and while the A30+ is on the low end of the range, it was still enough to bring the 220s to life.

The Bluetooth in the A30+ is the same module used in the S10 and A50+ and is limited to AAC and SBC. I found the Wi-Fi connection a bit more reliable than the Bluetooth. I also tested the A30+ with both a NAS connected via DLNA and with a USB stick and again found both worked quite well.

Support for Apple AirPlay permitted easy control of the A30+ with an iPad Mini running apps natively.

The A30+ doesn’t stray too far from neutral and while it doesn’t offer the last word in resolution or detail retrieval, it drove the JBL Studio 220 speakers rather well with good control in the low end, and a rather even sounding tonal balance.

Why spend the money?

There are certainly more sophisticated options with slicker apps but almost all of them lock you into a specific ecosystem. The appeal of the Arylic A30+ is the ability to use it with so many platforms and devices without restrictions.

It’s a well-designed and affordable option that works reliably.

The 14 Best Moments of Music Integrated Into a Movie Narrative: The Honest Broker