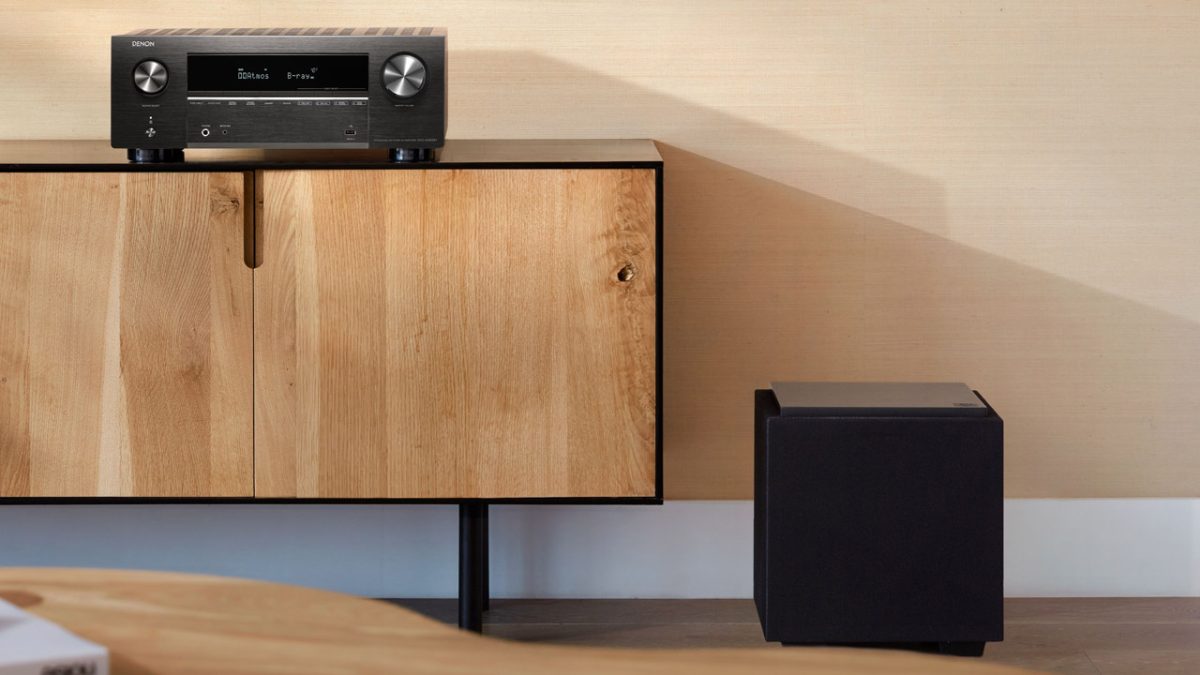 While soundbars have come a long way in the last few years, nothing beats a good A/V receiver with a discrete set of surround sound speakers. More inputs, more features, more flexibility and usually better sound to boot. Yes, it will take you a bit more time (and a roll of speaker wire) to set up, compared to a soundbar, but the sonic reward you’ll get is well worth the effort.

The A/V receiver market has been fairly stagnant in the last few years though at CEDIA Expo in September, we were happy to see a flurry of new receiver announcements including models from Denon and Marantz. All of the models we’re recommending support video displays up to 8K in resolution, include HDMI 2.1 and HDCP 2.3 support and are compatible with the latest source components including next generation gaming consoles. Also, all recommended receivers support Dolby Atmos – not just the “virtual” kind but the discrete kind with real height speakers for the most immersive surround sound effects.

The Denon AVR-S760H includes all of the features a burgeoning or budget-minded audiophile might crave including Dolby Atmos (5.1.2), DTS:X, six HDMI ports, network streaming and even a turntable input. It includes a reasonably powerful seven channel amplifier (75 Watts/Channel) which can power a Dolby Atmos 5.1.2 speaker system or do a standard 5.1-channel surround system in the main room plus provide power to second zone. The receiver also includes support for Denon’s multi-room music platform and app (HEOS) so if you’re thinking about putting speakers in multiple rooms (and don’t already have a Sonos system), this is something to consider.

I’ve been using the 760H in my home theater system for the past few weeks and have found that it works reliably, is easy to set up and customize, and is capable of reaching impressively loud reference levels in our 14 x 16 foot space. It’s equally well suited to movies and music, with great dynamics and detail. It locks onto a Dolby Atmos signal from Blu-ray Disc or streaming apps on an Apple TV 4K box reliably and quickly. The receiver was first released in 2021 but it is still current in Denon’s lineup as of November, 2022.

The only drawback is that inventory for this receiver is hit or miss. It’s rarely in stock on Amazon, except through third party sellers who sometimes inflate the price. The MSRP is $599 – do not pay more! I’ve seen it on sale at Costco (in stores and online) for as low as $399. Costco’s usual price is a very reasonable $499. If you’re looking for a solid entry-level receiver with all of the essential features, it’s worth seeking out. If you’re willing to take a chance on a refurbished/renewed model, you may have better luck finding one.

Onkyo got a bit of a bad rap several years ago with a notorious issue with a bad batch of HDMI boards that caused premature failure. This caused some fans to abandon the brand, even though the problem has been resolved now for many years. Also, the parent company of both Onkyo and Pioneer recently declared bankruptcy but a new company has stepped in to take over production and distribution of Onkyo gear. The new owner is PAC (Premium Audio Company), a joint venture between VOXX International and Sharp. PAC has promised continued support for current products as well as development of new Onkyo products moving forward. So we feel confident recommending the brand.

With nine channels of on-board amplification (100 Watts/Channel), the TX-NR7100 can fill a large room with immersive surround. You can choose between a 5.1.4 or 7.1.2-channel immersive surround system, depending on your room size, layout and preferences. Or you can go with a 5.1.2 or traditional 7.1 channel system and use the extra two amplifier channels for a powered set of speakers in another room.

What makes the TX-NR7100 receiver special is that it’s one of the first A/V receivers to include Dirac’s best of breed room correction software “Dirac Live” on-board at no extra cost. It even comes with a calibration microphone certified for use with Dirac in the box. The room correction routine itself is handled via a dedicated Onkyo app for Android or Apple devices. Seasoned Dirac professionals can also use Dirac software for Windows. Beyond what you can do with standard speaker calibration routines, Dirac Live makes adjustments in both the amplitude and time domain, compensating and correcting for anomalies in your listening room that may impact sound quality.

On the audio codec side, in addition to Dolby Atmos, Dolby TrueHD, DTS:HD Master Audio and DTS:X, the Onkyo TX-NR7100 includes “Imax Enhanced” support as well. With bi-directional Bluetooth, you can either stream music to the receiver using your phone or you can stream sound from the receiver to a pair of Bluetooth headphones or earbuds for late night listening.

Because Onkyo doesn’t have its own multi-room wireless music platform, it plays particularly nicely with third parties. The 7100 is “Works with Sonos” certified, which means your living room or home theater system can become its own Sonos room (zone) by adding a Sonos Port. The receiver also supports multiple streaming music services including Spotify, TIDAL, Deezer, TuneIn, and Pandora. It is also compatible with the three most popular smart home ecosystems: Apple HomeKit, Google Home and Amazon Alexa. The receiver can be voice-controlled on any of these platforms using a compatible device. The Onkyo is compatible with DTS PlayFi for playback of your local digital music files, compatible apps and synchronization across multiple rooms. Finally, the TX-NR7100 has Google Chromecast on-board and Apple AirPlay 2 support built in.

Similar in some respects to the Onkyo model, Denon’s brand new AVR-X3800H receiver offers nine channels of on-board amplification with 105 Watts/channel. This receiver was announced at this year’s CEDIA Expo in the fall and just began shipping last month. It includes the latest features and technology for future compatibility and covers all the bases for audio and video format support.

You’ll find Audyssey’s advanced MultEQ XT32 calibration software on board and a future software upgrade will enable Dirac Live room correction. But unlike the Onkyo receiver (and most other A/V receivers on the market today), the Denon AVR-X3800H supports connection of up to four subwoofers, with independent controls for each. Most receivers have only a single subwoofer output (or at most two, which are not independently adjustable). By having four independent subwoofer outputs, you can install two, three or even four subwoofers in your listening room and adjust them so they complement each other instead of working against each other. And no, this is NOT to annoy your neighbors (well not ONLY that) but it will allow you to get truly uniform deep bass response anywhere in your room.

The tricky part about bass frequencies is that they tend to interact with the room and with each other, creating areas where the bass is too strong (room modes) and areas where the bass disappears (bass nodes). With proper placement of multiple subwoofers – and proper calibration or correction – you can get deep, solid low frequency response no matter where you sit. The version of Dirac Live that will be available for the Denon AVR-X3800H next Spring will include Dirac’s “bass control” option so it should be able to apply calibration and room correction to up to four subwoofers, in addition to correction for the main speakers. Denon has said that there will be an additional charge for the Dirac Live update, but we don’t know the cost yet.

With its nine on-board amps and four sub outputs, the AVR-X3800H can be configured for a 5.4.4 or 7.4.2-channel immersive Dolby Atmos surround system. If you need even more channels, the 3800 actually has 11 channels of processing, so you can add a 2-channel power amp for a 7.4.4 channel system. Eleven speakers plus four subwoofers. That’s a lot of speakers! This makes the AVR-X3800H an excellent choice for a large home theater room or living room where you’ve got a lot of space to fill with sound.

The AVR-X3800H also has Denon’s HEOS whole home music and streaming platform on-board so it will easily integrate in a multi-room speaker system along with other HEOS devices. Install the HEOS app on your Apple or Android phone, link it up with the receiver, add your music streaming apps and you’re ready to rock.

For immersive surround, the 3800 supports pretty much every 3D audio format known to man (and woman): Dolby Atmos, DTS:X, IMAX Enhanced, Auro 3D, 360 Reality Audio and MPEG H. For legacy stereo and surround sound content, the receiver includes Dolby Surround, DTS Neural:X and Auro-Matic processing to enhance the immersiveness of the sound. If you’re into 3D audio, in virtually any format, on virtually any streaming service, the Denon AVR-X3800H has got you covered. And the receiver will only get better next Spring when Dirac Live becomes available as an optional software update.

Receivers Recommended in this Article: