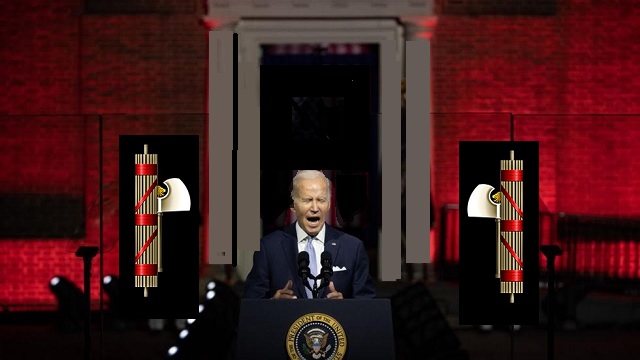 Joe Biden continued his attacks on Trump supporters in a Labor Day speech in Wisconsin, claiming, among other things, they threaten personal rights.  The speech was a follow-up to Biden calling Trump supporters “semi-fascists” ten days ago.  Let’s set the record straight, shall we?

Documents obtained in a lawsuit brought by the Missouri Attorney General and others show that a dozen federal agencies participated in the Biden administration’s collusion with social media companies to suppress the free speech rights of Americans about COVID and elections. The Missouri Attorney General called it “a massive, sprawling federal ‘Censorship Enterprise’,” involving the Department of Homeland Security, the FBI, the CDC, and others.  If bringing the full weight of the federal government down on Americans who speak their minds isn’t a threat to personal rights, I don’t know what is, and Joe Biden’s in charge of it.

The scheme involves Leftbook and Fritter.  Leftbook was in weekly communication with Biden administration officials about what to censor, the documents obtained in court show.  This includes personal correspondence between Anthony Fauci and Mark Zuckerberg to suppress the lab leak COVID origin theory which has only gained credence with the passage of time.  Leftbook also wrote to the Surgeon General asking “what the White House expects of us.”  Fritter scheduled a meeting to brief White House officials on so-called “vaccine misinformation” and to discuss how to carry their “partnership” forward.

There’s more.  The CDC had a direct pipeline to Fritter to tell them what COVID information to take down.  The Cybersecurity Agency asked Fritter to remove accounts.  The actions of the ‘Censorship Enterprise’ go on for hundreds of pages and involve more than 50 Biden administration officials.  [Link to documents here] The White House even asked that Fauci parody accounts be taken down from Leftbook.  Making fun of the king is not allowed in Joe Biden’s America.

These are the results of the first six weeks of discovery in the lawsuit.  There’s more to come, but we can already see that the conspiracy between the Biden administration and Big Tech to deprive Americans of their free speech rights is much wider and deeper than anyone thought.  As more conspirators are discovered, they will be added to the lawsuit.  The White House is claiming its communications are privileged, although it is clear that its external communications are not.  Mark Zuckerberg has already admitted Leftbook suppressed the Hunter Biden laptop story before the 2020 election, acting on a request from the FBI.  He has a whole lot more explaining to do as to why his supposedly neutral platform is in bed with the lying dog-faced pony soldier Biden administration.

Now let’s set the record straight on fascism.  Fascism is a dictatorship brought about by the combination of Big Business and Big Government.  The textbook example is Mussolini’s Italy where the CEOs of the biggest corporations in the country were also the cabinet ministers in Mussolini’s government.  You put Big Business together with Big Government and you have the kind of concentration of power our Founders warned us about.  Bad things happen when too much power gets in the hands of too few people.  Dissenting voices get silenced, for starters, as the documents obtained in the collusion lawsuit I’ve been discussing so thoroughly demonstrate.

So we’ve got a serious problem in this country, and it’s not 80 million Trump supporters.  It’s the Biden administration and its bosom buddies in Big Tech.  They are the ones threatening personal rights and suppressing free speech.  They are the ones threatening democracy by suppressing important information, like the Hunter Biden laptop story, that could have changed minds before the election.  A recent poll found most Americans believe Trump would have been reelected had there been “truthful” coverage of the Hunter Biden laptop story.   If Big Tech collusion with political power brokers isn’t a threat to democracy, I don’t know what is.

Leftbook and Fritter have both censored me along with many, many others.  And now they can live with the consequences.  One of the consequences is that their entire Censorship Enterprise with the Biden administration – the whole stinking mess – is being dragged out into the open for all to see.  Who are the fascists, again?

TSR Tours The She By Shereé Showroom Amid "Shein" Ripoff Rumors

‘I Perform for an Audience of One, and That Is God’: Kanye West Speaks Out in Pro-Life Interview?

Risky Business: Sitting too Much