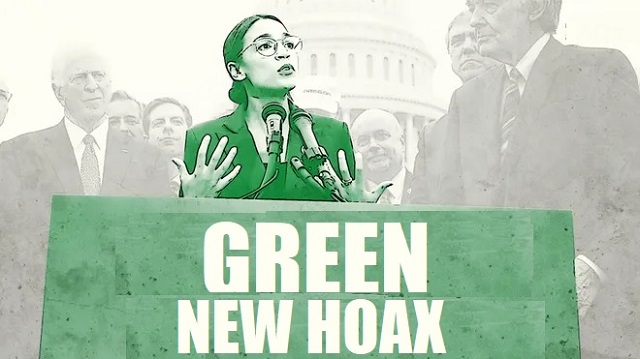 Driving Stakes in the Heart of the Phony Climate Change Narrative It’s been a bad stretch for the phony climate change narrative, lately.

A new report shows 96 percent of NOAA’s temperature stations don’t meet the agency’s own placement standards.  They are deliberately placed near urban areas in order to overstate average temperatures, leading to the now-routine bogus claims we’re having the ‘hottest year on record’.

Someone pointed out the inconvenient truth that NASA has recognized over the years that the biggest factor affecting temperature and climate is the sun, specifically, variations in the earth’s solar orbit.  Fly too close to the sun, and things get a little warmer, whodathunkit.

Those disappearing coral reefs in Australia?  Well, guess what – they’ve rebounded to record levels.  Environmentalists routinely tell you the sky is falling and the coral reefs are disappearing, but neither is true.

The climatistas prattle on about extreme weather events, but the fact of the matter is that the number of climate-related deaths has dropped by 99 percent since 1920 and is now approaching zero – except for storm chasers, of course.  Oh, by the way, the number of tropical cyclones has dropped 13 percent since pre-industrial times, a new study found.  Sorry to rain on your anti-growth parade.

The climate change crowd is deceiving you when it claims extreme weather is increasing and climate change is to blame.  It turns out that the U.N.’s Intergovernmental Panel on Climate Change – IPCC – recently changed its methods, producing an increase in extreme weather events on paper but not in the real world. “(T)he latest IPCC report has introduced novel ‘attribution’ statistics and now insists that things are getting worse. It’s yet another case of scientists trying to scare the public into compliance,” a recent paper said.

So-called experts say sea levels are rising, but photos show they’re not, and the satellite data underlying the sea level rise claim has not been vetted for satellite altitude which makes all the difference in the method used.

Greenies hyperventilate about the water level at Lake Powell being down 94 feet since 2000 and blame evaporation from hotter temperatures, but it is government policies that produced the drop.  The original plan was to hold back water in wet years to make up for dry years, but the government now releases more water than originally planned in wet years, leaving no cushion.  You can’t blame that on climate change – or maybe you can, if you’re dishonest.

Similarly, it is government policies that are producing the increasing wildfire problem in the West.  Litigation under environmental laws and environmental reviews have delayed thinning and controlled burns.  Some controlled burns are being done, stupidly, in windy conditions.  So look to forest management, not climate change, if you’re sincerely interested in finding the culprit instead of just demagoguing the issue.

California and Germany are finding out that alternative energy isn’t all sunshine and lollipops.  Faced with electricity shortages from pursuing green energy policies, both are moving toward increasing reliance on their fossil fuel and nuclear power plants.

If you’re pinning your hopes the planet won’t burn up on the new climate bill Joe Biden is signing today, you might want to reconsider.  If you use U.N. climate models and everything in the bill goes swimmingly, the average temperature of the earth in the year 2100 will be 61.972 degrees instead of 62.0 degrees, best case.  I’m so relieved, and I’m so glad we’re spending $739 billion dollars to achieve a drop of 0.028 degrees.  Lollipop, anyone?

The post Driving Stakes in the Heart of the Phony Climate Change Narrative appeared first on Dr. Rich Swier.

Michigan’s Voter Records a ‘Mess,’ Says Man Who Received Multiple Ballot Applications for Someone Else

‘How Is That In Our National Interest?’: DeSantis Takes Action To Limit Chinese Communist Party’s Land Buyouts