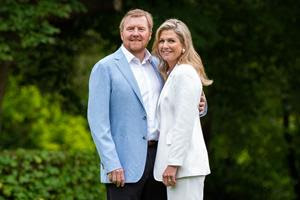 Washington, Aug. 01, 2022 (GLOBE NEWSWIRE) — His Majesty King Willem-Alexander and Her Majesty Queen Máxima will pay a working visit to San Francisco and Silicon Valley (California) and Austin and Houston (Texas) from September 6-9, 2022.

This working visit underscores the strong economic ties the Netherlands has with California and Texas. The Netherlands is Texas’ leading EU trading partner. California and Texas are the fifth-largest and ninth largest economies in the world and, in that light, attractive partners for the Netherlands for deeper economic cooperation. In addition, transatlantic cooperation is essential for safeguarding the security and prosperity of the Kingdom of the Netherlands. The United States is our most important partner within NATO and is also a major partner when it comes to global challenges like climate change, the energy transition, mobility, urbanization, and healthcare.

Parallel to this working visit, there will be a trade mission to San Francisco and Los Angeles featuring companies from the life sciences & health sector and the urban mobility & cycling sector. A delegation of CEOs from the Confederation of Netherlands Industry and Employers (VNO-NCW) will also participate in this trip to California and Texas. These companies will exchange ideas with partners from the US about expanding economic cooperation and addressing social challenges.

On Tuesday morning, the royal couple will be welcomed at San Francisco City Hall by Mayor London Breed. They will then visit the city’s iconic Castro Street, the heart of San Francisco’s LGBTI+ community. There they will speak with activists who advocate for equal rights for LGBTI+ people.

Following that, the King and Queen will attend events relating to the trade mission. They will join Mayor Breed for the opening of the “Urban Challenges” seminar, which looks at ongoing urbanization and shared challenges faced by the Netherlands and California in areas like health, mobility, and sustainability. The seminar will be an opportunity for the American cities of San Francisco and Los Angeles and the Dutch cities of Rotterdam and Utrecht to share experiences and solutions that contribute to a sustainable living environment.

Later in the morning, the royal couple will meet Governor Gavin Newsom, who will then join them for a discussion with VNO-NCW. This meeting will explore opportunities for cooperation and existing projects between the Netherlands and California. The Netherlands and California have been working together for many years to find innovative solutions to address climate change, and they are now broadening their collaboration to include the circular economy. Afterwards, King Willem-Alexander will attend the opening of a roundtable discussion on the climate and the circular economy, while Queen Máxima will attend a presentation on cooperation in the area of climate and agri-tech.

In the afternoon they will visit the University of California San Francisco Medical Center. At a seminar on digital health they will learn more about Dutch innovations and various public-private Dutch-American initiatives in the health sciences.

Later, King Willem-Alexander and Queen Máxima will be present for a meeting of CEOs at the San Francisco Conservatory of Music. The meeting’s theme will be “Economic Ties and Shared Challenges.” Several US tech and other companies with offices in the Netherlands will also take part. Participants will talk about what they are doing to help combat climate change and improve global health. On Tuesday evening, the royal couple will attend a networking reception at San Francisco City Hall, where King Willem-Alexander will deliver a speech.

On the morning of Wednesday, September 7, the King will visit the University of California, Berkeley. This world-renowned university has played a key role in the success of Silicon Valley and has strong ties with the Netherlands. For example, Berkeley offers a program in Dutch studies and is home to the Queen Beatrix Chair of Dutch Language, Literature and Culture. King Willem-Alexander’s visit will coincide with the program’s 50th anniversary.

In the afternoon, Education Minister Robert Dijkgraaf will launch the Dutch Network for Academics in the US (DNA-US), which will aim to promote knowledge-sharing between Dutch researchers in the US. The King will speak with faculty members and students in the Dutch program. He will also speak with representatives of the Dutch academic community and enterprising researchers and about the key role played by California’s universities in academic entrepreneurship and the transfer and further development of new technologies.

Queen Máxima’s morning program will begin with a visit to the Dutch company HackerOne, a tech firm with roots in Groningen and headquarters in San Francisco. HackerOne is a platform that enables ethical hackers to earn money by tracing security leaks at major companies. Queen Máxima will talk with the company’s founders about how ethical hackers help ensure the security of companies in cyberspace and will observe them at work. Following these visits, King Willem-Alexander and Queen Máxima will join each other at a location near the Golden Gate Bridge.

On Wednesday afternoon, the royal couple will visit Google’s headquarters. This visit will focus on Google’s ambitions in the realm of climate action, sustainable solutions, and innovations that help combat climate change, and on Google’s role in the Netherlands.

The King and Queen will then visit Stanford University, in the heart of Silicon Valley. Upon arrival they will be given a short tour by the president of the university. They will then meet with the Ecomotive Team of Eindhoven University of Technology, which has succeeded in developing a car made entirely of circular material. Following that, the royal couple will speak with Dutch researchers, students, and innovators who work and study in Silicon Valley, including the Dutch-American Nobel laureate Guido Imbens.

At the Holland in the Valley event, the royal couple will meet Dutch people who work for US tech companies or have their own startup. King Willem-Alexander will give a brief speech. During a pitch session, startups from the ScaleNL accelerator program will be given the opportunity to present their companies to the assembled Dutch business delegation and representatives of Silicon Valley companies.

Afterwards, at a seminar on artificial intelligence, King Willem-Alexander and Queen Máxima will be given insight into the role played by Dutch companies in the further development of AI in mobility and healthcare.

Thursday morning marks the start of the royal couple’s visit to Texas, where they will be received by Governor Greg Abbott at the historic Governor’s Mansion. This meeting will focus on the close economic ties between the Netherlands and Texas.

Following that, the King and Queen will meet with Mayor Steve Adler at Austin City Hall. Austin leads the way in the area of mobility and technological innovation and home to companies like NXP, Tesla, Dell, and Oracle. Over 10 years ago, the city began implementing an ambitious plan to create safe cycling infrastructure, with the help of Dutch expertise. To mark that noteworthy anniversary, Mayor Adler will issue a proclamation. He will then accompany the royal couple on a short bicycle ride to Austin’s public library whose design was inspired by the Amsterdam public library and the Mediatheek media library in Delft.

After this bicycle ride, King Willem-Alexander and Queen Máxima will visit the Capital Factory innovation center, where they will attend an event for local startups, tech companies, and investors. Representatives of innovative Dutch companies will also be present to share their experiences about building an ecosystem that promotes entrepreneurship and business-to-business cooperation. Austin is a growing tech hub, which offers opportunities for Dutch startups and tech firms.

Another issue central to this part of the program is health. In the afternoon, the royal couple will attend a seminar on innovation and digitalization for future-proof healthcare.

After this seminar, King Willem-Alexander will visit Fort Hood, where Dutch soldiers have been trained for over a quarter of a century. The theme of the visit will be international security and cooperation between the Dutch and US armies. The King will speak with Dutch and American soldiers in a hangar where Dutch Chinook and Apache helicopters are stationed.

The day will end with a visit to Austin FC soccer team. In Texas, sports plays a major role in terms of cooperation between innovation hubs and Dutch high-tech and sporting organizations. Austin FC has also made use of a Dutch innovation: smart lighting to help the grass on the field grow. The King and Queen will be given a tour of the stadium and meet the owners, including Dutchman Marius Haas, who also serves as honorary consul in Austin. They will also speak with coaches, Dutch player Danny Hoesen and the youth team, which is taking part in a training camp in the Netherlands this summer. After the stadium tour there will be a dinner attended by both Dutch and American guests, at which King Willem-Alexander will give a speech. The focus of the dinner will be on collaboration between the Dutch and Texan business communities.

The last day of the visit will take place in Houston. Here, the royal couple will be received by Mayor Sylvester Turner. Like the Netherlands, Texas has to deal with the effects of rising sea levels and increasingly extreme weather conditions. In 2017, Hurricane Harvey caused severe damage. King Willem-Alexander and Queen Máxima will conclude the morning as participants in a roundtable discussion about ways of protecting the city from flooding. Dutch companies can contribute to these efforts with their knowledge and experience. Afterwards, the royal couple will take a short boat trip on the Buffalo Bayou waterway where they will be given a brief insight into the measures Houston has taken improve its flood defenses. The boat trip will end at the Cistern, a former underground reservoir in Buffalo Bayou Park.

In the afternoon, King Willem-Alexander will attend several roundtable discussions in which participants will share their experiences with coastal defense and the use of port infrastructure to promote the energy transition through, for example, hydrogen and carbon capture and storage. There are various important parallels between the Netherlands and Texas with regard to the energy transition. Rotterdam and Houston are both ports and hubs in the energy sector, for instance.

Queen Máxima will start the afternoon with an informal lunch with Dutch and Texan female role models from the worlds of business and politics. The lunch, which will take place in the boardroom of the Texas Medical Center, will focus on leadership and diversity. Afterwards, Queen Máxima will be given a tour of the Texas Medical Center’s innovation center. The size of the medical center and the number of treatments offered give rise to opportunities for Dutch institutions and companies involved in innovation and digitalization for future-proof healthcare. Queen Máxima will then visit MD Anderson Cancer Center, where she will learn more about innovative cancer treatments. She will also be given a tour of the children’s ward.

The working visit will conclude with a reception at the Museum of Fine Arts attended by representatives of US and Dutch companies in Texas. King Willem-Alexander will deliver a short speech.