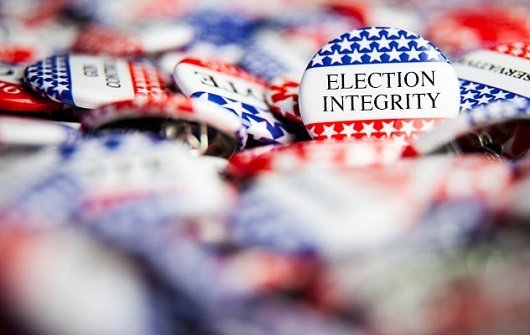 Democrat-friendly media outlets are working overtime to discredit all efforts to achieve free and fair elections and to smear anyone involved in election integrity efforts.  One of many such pathetic articles appeared in The Guardian, the left-wing British publication with a U.S. presence. The article drives the phony narrative that poll-watching and training for election integrity activists amounts to voter intimidation and is to be condemned.

The article specifically names Tim Meisburger, a member of my activist network devoted to achieving free and fair elections. Tim has spent 30 years observing overseas elections, culminating in his appointment as Director of the Center for Democracy Rights and Governance for the federal agency USAID. Tim is currently Director of the America Project’s election integrity program.   The Guardian never asked him for his side of the story, so he wrote a letter to the editor demolishing the article, a letter which the Guardian has yet to publish.  In the letter, Tim wrote:

This article is littered with “scare quotes”; a rhetorical device and cliché whose overuse reflects poorly on the professionalism of the author, and competence of his editor. Although this article is listed under “US news”, it is immediately clear that it is an opinion piece….

Early in the article Peter Stone … plays the “Hitler” card, suggesting our leadership is pushing a “big lie”; a pejorative the left uses to refer to the opinion shared by many (according to recent polls, more than half of all Americans, including 30% of Democrats) that the 2020 election may have been affected by fraud….

As election and democracy professionals know, you cannot judge the legitimacy of an election by looking solely at what happens on election day, as many events can occur well before election day that affect the integrity of the election process….

[U]ndisputed examples of incidents or programs that might give one cause to doubt the democratic legitimacy of the election include:

These and other incidents may not be enough to sway Peter, but they are certainly enough to create reasonable doubt for many people. For me, as an election professional, the prevention of effective observation alone is enough to declare that the integrity of the election cannot be verified; and if we were overseas monitoring an election in a developing country and saw that, we would condemn the process and call for new elections….

The letter goes on from there and includes the inconvenient fact Meisburger left USAID at the end of President Trump’s term, not under a “cloud” as the article baselessly claimed.

That’s the rebuttal.  Let’s see if the Guardian prints it.  Don’t hold your breath.  Open and honest debate, any more than free and fair elections, is not how the Democrats roll.

SHEFFIELD: Trump Reveals How To Save America From Biden’s Magical Thinking

Democrats’ Climate Bill Could Pay Farmers To Not Grow Food

‘Young Voices Are Mighty:’ March For Life Attendees Say It’s Time To Give The Movement To The Next Generation