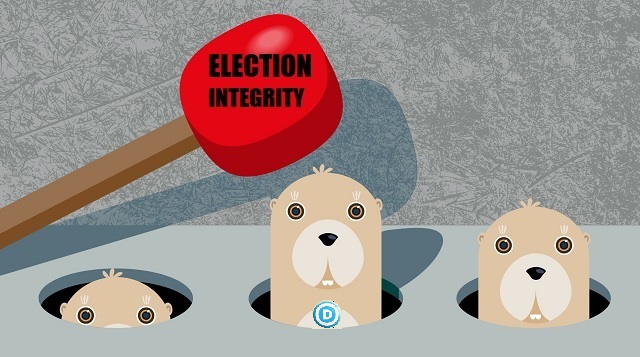 Our elections are a mess and they won’t be fixed any time soon.  Some recent stories will show you what I mean.

The use of private money to enable government election workers to conduct get-out-the-vote drives for the Democrats was heavily criticized in the 2020 election.  The use of Zuckerbucks, as they are known, has been outlawed in some states, as a result.  But elections officials in Milwaukee are back at it, using money tied to new Democrat donors and partnering with a Democrat activist group to get out the vote for Democrats this time around.  The Wisconsin Republican Party has sued.

Then there’s the perennial problem of dirty voter rolls, which the Democrats resist fixing at every turn.  Federal law requires states to maintain accurate lists, but many do not.  Several counties in Minnesota have just been sued for failing to remove duplicate registrations from their rolls.  In New York, more than 3 million voters – almost one out of four – lack a driver’s license or Social Security number to prove their identity.  This results in duplicate registrations which can facilitate fraud.  Cheaters need actual extra voter records of people who don’t vote in order to cast phony ballots in their name.  So who the heck are these unidentified people and should they really be on the rolls?

The Wisconsin Elections Commission told election workers they can fill in missing information to complete absentee ballots, then count them, even though state law requires the voter be contacted to cure the ballot.  This prompted a lawsuit which the Democratic National Committee is seeking to join to have the law declared voter suppression.  That’s a head scratcher.  Why would the Democrats want to count incomplete absentee ballots that could well be fraudulent?

More Democrat funny business with absentee ballots took place in New Hampshire where the state Democratic Party was mailing out absentee ballot applications to 39 towns.  The applications inaccurately claimed the voters had requested them and the return addresses were either wrong or were for entities that didn’t even exist.  Voters were being disenfranchised and the state Attorney General ordered the Democratic Party to cease and desist.

Then there’s outright fraud.  A former Democrat congressman in Pennsylvania was sentenced to 30 months for orchestrating schemes to stuff ballot boxes for Democrat candidates for several years.  He admitted to bribing a Democrat elections official to add votes to Democrat candidate totals.  Four people in North Carolina pled guilty for their role in absentee ballot fraud in the 2016 and 2018 elections.  The scheme involved collecting blank or incomplete absentee ballots, filling in candidate choices, and forging the voter’s signature.  More cases are pending.

A federal judge upheld Georgia’s new election integrity laws, including voter ID and citizenship checks.  Stacey Abrams had been going around for years claiming Georgia’s laws are voter suppression.  The judge disagreed.  The case is also notable because here we have yet another court upholding voter ID, which is only common sense and another head-scratcher as to why the Democrats would oppose it.  You gotta ask yourself why the Democrats keep trying to do away with voter ID.  They used to say they want everyone to vote, but that’s so absurd you haven’t heard that line out of them for awhile.

A citizens group in Michigan sent the Democrat City Clerk in Flint a letter demanding she comply with a state law requiring party parity in the number of election inspectors.  Flint has 92 percent Democrat inspectors and only 6 percent Republican.  The City Clerk resigned rather than comply with the law.  The same group filed a complaint to get the state out of ERIC, a supposed multistate voter roll maintenance operation which is actually a thinly disguised get-out-the-vote drive for Democrats.  The state turns over confidential voter information to ERIC, which may not even be legal, thus outsourcing a core government function – maintaining the voter rolls – to a black box that won’t answer questions or file annual reports which is funded by Democrat-aligned money.  Something’s wrong with this picture.

There are a thousand holes to be plugged before we can say with confidence our elections are secure.  It’s a never-ending process of whack-a-mole, especially with the Democrats hell-bent on poking new holes at every opportunity.  But we have no choice; we have to keep banging away at it.  So don’t get mad at the Democrats’ election shenanigans, get involved.

Church Sues Cops, City For Taking Its Weed And Shrooms