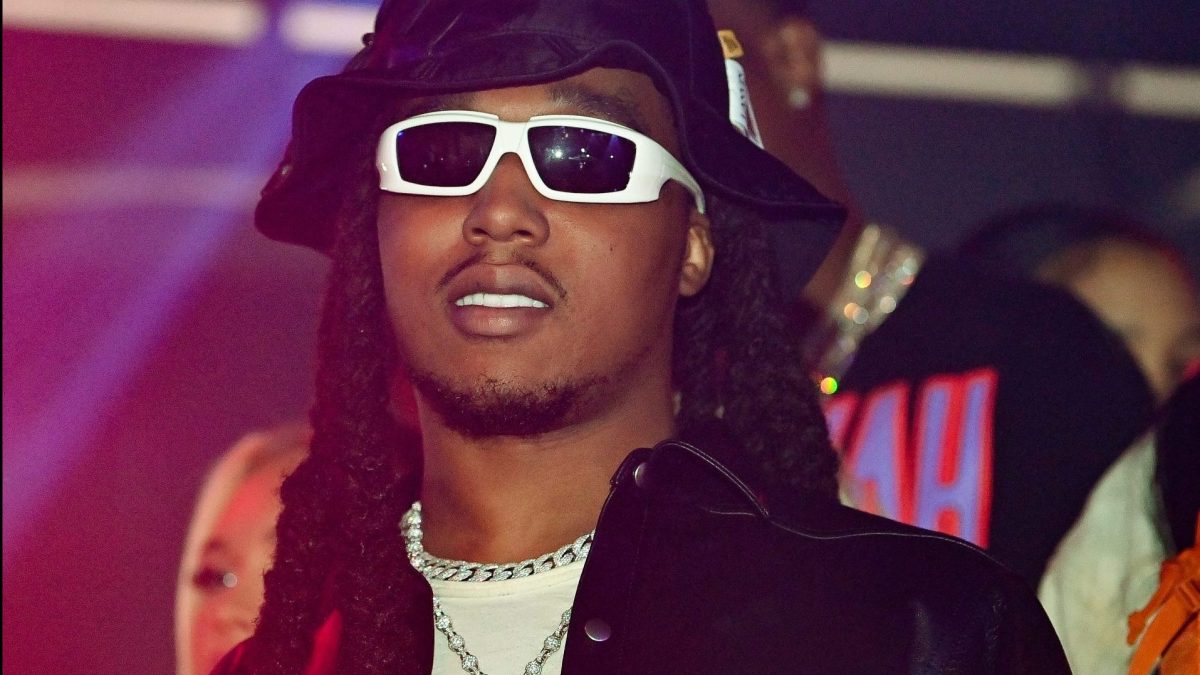 It’s a cloudy day in Atlanta this Friday. And the weather reflects the city’s heart as it prepares to bury one of its lyrical talents–gone way too soon. Funeral services are underway for Kirsnick Khari Bell, better known in the entertainment industry as Takeoff.

The young rapper was shot and killed in Houston on November 1 while attending a private event with Quavo. Officials pronounced him dead on the scene after being shot multiple times in the head and torso. Police are still investigating the shooting, but his label Quality Control blamed the unfortunate passing on“senseless violence and a stray bullet.” Takeoff was 28.

Takeoff, along with his uncle Quavo and cousin Offset, found mainstream success in the group Migos. But in recent months, the group parted ways for unconfirmed reasons. Quavo and Takeoff released a joint album, Only Built For Infinity Links, on October 7.

Just a few short weeks after Takeoff demanded his musical impact flowers on Drink Champs, the rapper is no longer here to accept them. According to TMZ, Takeoff’s funeral service began in the State Farm Arena at noon local time. Earlier this week, Georgia residents could secure up to two tickets via Ticketmaster.

Though photos or videos are prohibited inside the venue, folks have already posted both online. Circulating footage shows a packed venue with family, friends, and fans filling the stands.

A booklet details the service schedule, including musical selections and interludes, a video montage, poem and scripture reading, and personal reflections from attendees. Justin Beiber is reportedly one of the musical acts booked.

Takeoff’s family has asked that people donate to the Rocket Foundation in lieu of flowers or gifts, which supports programs combatting gun violence, per Page Six.

Before the start of the service, street videos captured the hearse carrying Takeoff driving through the city.

Since his passing, fans have gotten creative with their tributes to the rapper. Takeoff has inspired a wave of love across social media, from artwork to haircuts, as his family begins laying him to rest.

Meanwhile, celebrities are also taking to social media to send their condolences and love while sharing in his family’s grief. Meek Mill took to Twitter to send prayers and apologize for missing the funeral.

According to Gossip In The City, the mayor of Atlanta awarded Takeoff the prestigious Phoenix Award during the memorial service.

The outlet also claims that Drake cried while reading a poem dedicated to the fallen artist. Additionally, the outlet says Offset and Quavo attended the services as a united front.

“Offset and Quavo came together today. They both said they wanted to focus on brotherhood and family. Offset speech was very emotional, and he could barely get anything out,” Gossip In The City claims.

No word yet on when the funeral will wrap, but The Shade Room is sending our condolences to the family, friends, and fans of Takeoff–the rapper, the Migo, and THE ROCKET!

I Can't Be Controlled Because I Haven't Killed Anyone

Chloe Bailey Shows Off Her Killer Vocal Skills With A Cover Of Beyoncé’s ‘Plastic Off The Sofa!’