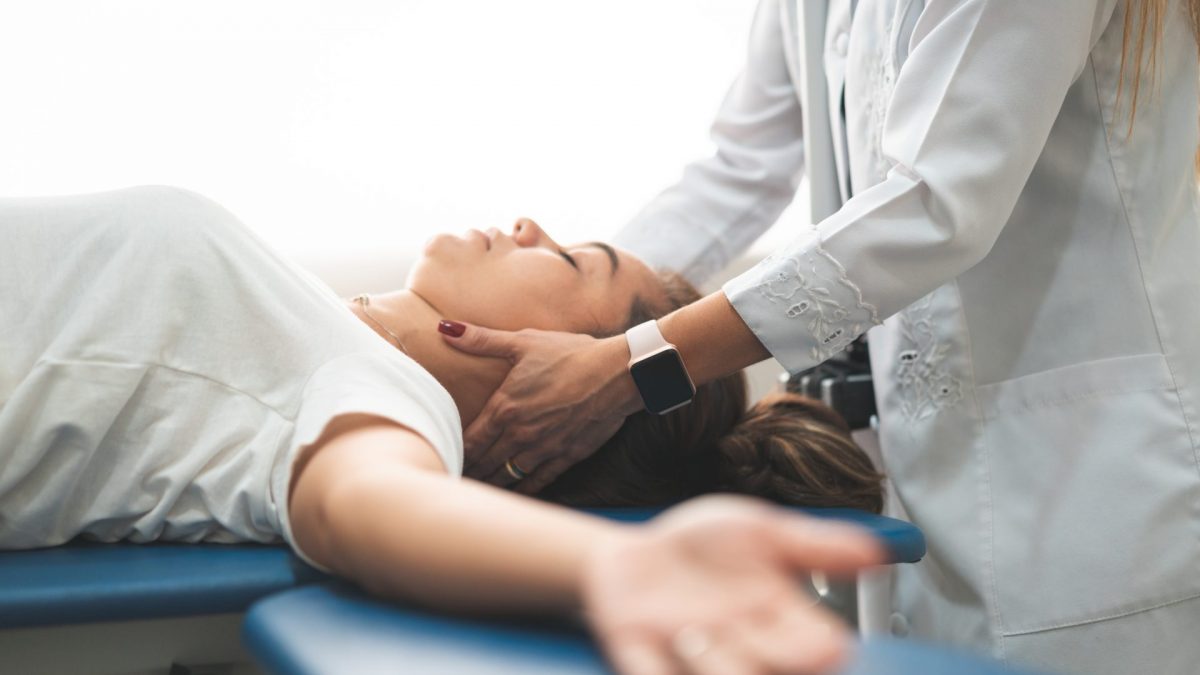 Family of the Georgia woman who was left paralyzed after a neck adjustment are looking to sue the chiropractor, who has since left town with his family in tow as media scrutiny against him continues to intensify.

The Daily Mail reports that Dr. TJ Harpham, 42, was spotted flying to Flint, Michigan from Savannah-Hilton Head International Airport on Friday, with his wife Jennifer, 37, and their three kids, a week after news broke that his patient, 28-year-old Caitlin Jensen, was left paralyzed and in critical condition following an adjustment last month.

Jensen’s grandmother, Linda Foster, 72, told the outlet that Dr. Harpham has yet to reach out to Jensen’s family and has not offered an apology as of Tuesday.

Now, the family is considering filing a medical malpractice lawsuit, as advised by her attorney, Foster says.

“He said [at the time of the incident] it has not [happened before],” Foster told the Daily Mail. ”

He has not reached out to her or any of the family and we have not tried to contact him at this point. It’s really all about her and what needs to be done.

I think [Caitlin’s mother] Darlene is considering a medical malpractice suit – she has been advised to, I know.”

Meanwhile, Dr. Harpham has remained tight-lipped about the incident, and refused to offer any comment before flying to his second home in Michigan, likely to escape the growing media scrutiny he’s facing in Georgia, where he practices at Richmond Hill Family Chiropractic.

The incident has left Jensen in a hospital bed since the appointment on June 16, where she remains as of Tuesday, as previously reported by The Shade Room.

Foster added that her granddaughter will undoubtedly have to undergo intensive physical therapy, and the family will have to refit the home to make it more accessible for her following the botched neck adjustment.

“It’s just because we want people to know and we want to take care of Caitlin. It’s going to be a life-changing event for her no matter what her outcome is. There will be physical therapy and they’ll have to refit their house – as it is, she won’t even be able to get in the house with the steps at the back and the front,” Foster said of her granddaughter.

Jensen had initially signed up for treatment at Dr. Harpham’s clinic after developing lower back pain and aches in May as she studied for final exams. She had previously visited the chiropractor three times prior to the adjustment on June 16 which left her paralyzed.

Foster said that her granddaughter had never visited a chiropractor before being seen by Dr. Harpham, and noted that the botched adjustment was supposed to be her last appointment.

“She’d just graduated from college for the second time in May and she’d spent a lot of time studying for her final exams and so her neck felt stiff and tired because of that,” she said. ”

She went for the low back pain – this was her last appointment. She’d never gone to a chiropractor in her life until now.”

Paralyzed After Routine Chiropractor Appointment Due To Rare Condition

Jensen suffered a stroke and went into cardiac arrest following the adjustment, losing her pulse for ten minutes before doctors at Memorial Health stabilized her in the intensive care unit. Dr. Harpham reportedly told Jensen’s family that it was just a “reaction” to the treatment.

Once doctors were able to stabilize Jensen, she was rushed to surgery, where they were shocked to learn all four arteries had been dissected. They were able to repair some tears and placed a stent in one artery, according to the family’s GoFundMe.

A month later, Jensen still remains in critical condition at the ICU at Memorial Hospital in Savannah. Relatives said the trauma has resulted in a traumatic brain injury.

Jensen is currently conscious and able to respond to verbal commands by blinking her eyes, as can wiggle her toes on her left foot, however the rest of her body sits in a state of paralysis due to the injury. Her four dissected arteries, which produce symptoms of neck pain and headaches, prompted her to visit a chiropractor in an effort to alleviate the pain.

Her family is currently seeking financial help as her medical bills continue to mount, with a GoFundMe having raised $76,000 out of a $250,000 goal as of Tuesday.