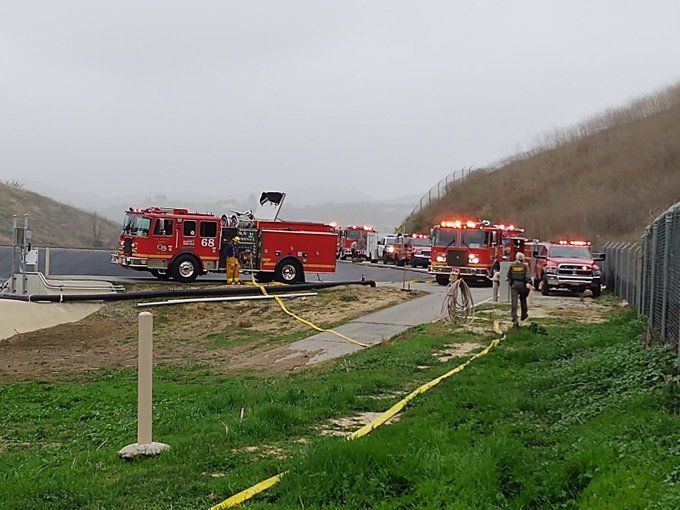 A retired Los Angeles County fire captain testified that he was ordered to take pictures of the deadly helicopter crash that left Kobe Bryant, his 13-year-old daughter Gianni and seven others dead, but his superiors are denying they issued those orders.

Brian Jordan, who retired last year, reportedly had to be excused from the witness stand three times due to emotional trauma during his two-hour testimony, according to Law and Crime.

During his testimony, he was grilled about the photos he took of the fatal crash back that killed the 41-year-old NBA legend and his daughter in January 2020.

Bryant’s widow, Vanessa, is currently suing LA County sheriffs and fire departments for invasion of privacy after officers allegedly shared photos of the crash site with others.

For his part, Jordan said he never shared the images with anyone outside of the sheriff’s or fire departments, however he did appear confused at times when asked about events, the outlet reported.

When Luis Li, Bryant’s attorney, asked Jordan why the laptop he provided authorities was missing its hard drive, he said he was unaware of it, but that “he did not manipulate any devices.”

“I have no clue,’ Jordan said, but added: ‘I did not manipulate any devices.”

During his testimony, Jordan insisted then-deputy fire chief Anthony Marrone, who as of August 1 is acting fire chief, told him to take the photos.

Marrone denied telling Jordan to take any photos, he said in a sworn testimony provided back in August 2020.

He added that “taking such photographs would neither be right nor appropriate,” and said he instructed everyone to not photograph any crash victims.

The trial is expected to last another week.

Meanwhile, Vanessa Bryant, who’s seeking unspecified damages from the fire and sheriff’s departments, broke down in tears in court during her invasion of privacy trial last Wednesday after her attorney told the jury of how first responders leaked graphic photos of the late NBA star and their daughter’s mutilated bodies, as reported by The Shade Room last week.

Like this is Vanessa Bryant’s court pictures from the case talking about first responders taking pics of Kobe’s DECAPITATED HEAD. the drawing just never matches the mood. Idk pic.twitter.com/5TXAx2Gqz9

Courtroom sketches obtained by the Daily Mail show as Vanessa Bryant sobbed inside the federal courtroom while her lawyer revealed how photos of her husband’s “decapitated body” went public after sheriff’s deputies and firefighters showed the gruesome images to random patrons at a California bar, two days after his death following a helicopter crash in Calabasas.

Bryant and his 13-year-old daughter Gianna, along with seven other passengers died in the crash back on January 26, 2020, as the group were en route to a girls basketball tournament where his daughter was scheduled to play.

Vanessa had filed a multi-million dollar federal lawsuit against the Los Angeles County Sheriff’s Department in September 2020 regarding the leaked photos, which she claims has caused “severe emotional distress.”

She added that she became “physically ill” thinking of strangers “gawking” over pictures of her dead husband and daughter’s mangled corpses.

The lawsuit, documents of which were obtained by journalist Shakira S. Briggs, alleges that officers had taken the photos “for their own personal gratification” and not for any kind of investigative reason.

The FDA’s Vaping Ban Has Totally Backfired. Here’s Why

ANTONI: Dating Game: The Politics Behind the Timing of Recessions

Brett Favre Calls To Be Dropped From Mississippi Welfare Lawsuit