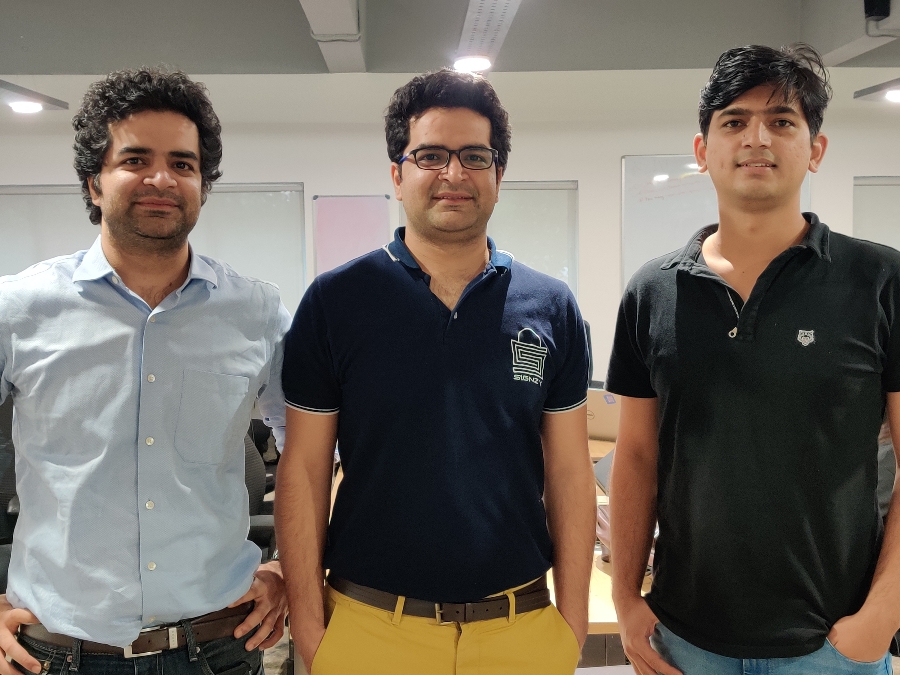 Company to utilize funds for enhancing its No-code Workflow Digitalization Platform, and driving its greater adoption in international markets

Leading digital banking infrastructure enabler Signzy today said that it had raised INR 210 Crore (US$26 Million) from Gaja Capital and its existing investors, Vertex Ventures and Arkam Ventures, in its latest funding round. The Bengaluru-based Fintech SaaS company added that it would use the fresh capital to enhance its ‘No-code Workflow Digitalization’ platform and solutions, as it targets greater adoption of its platform by a global banking and financial services clientele.

Signzy was founded in 2015 by Ankit Ratan, Ankur Pandey, and Arpit Ratan. The company said that its award-winning and patented No-code AI platform, GO, is seeing significantly accelerated adoption, as banks and financial services providers across global markets accelerate their digital transformation journeys.

Ankit Ratan, CEO of Signzy says, “The financial services industry is undergoing a massive and multi-year digital transformation and we have only seen the tip of the iceberg so far. Signzy has seen strong adoption of its No-code product by financial services companies as they start on their once-in-a-lifetime digital transformation journey. The solution has been developed from the ground up to allow banks and financial services providers to roll out and offer fintech-like user experiences in a matter of days, not months or years. We are also thrilled that Gaja Capital has come on board in support of our vision, as we remain committed to providing world-class digital transformation experiences to a growing number of clients around the world. This investment will help us to drive adoption and build the product further to support this long-term vision.”

Gopal Jain, Managing Partner, Gaja Capital says, “The team at Signzy has really impressed us with their No-code digitalization platform for the financial services industry, which we believe is the first of its kind anywhere in the world and solves real pain points for their customers. Their technology has been enabling banks to undergo rapid transformation without changing the underlying legacy systems. Ankit, Arpit and Ankur have built a truly unique and world-class product out of India and we are glad to partner with them as they work towards greater market penetration and adoption of their platform in markets around the world.”

Signzy has filed eight patents so far in the US, and nine in India, for its innovations. The company also received a US patent for banking in the metaverse earlier this year. The company won the Best KYC Solution award at the recently concluded Global Fintech Fest in Mumbai, organized by National Payments Corporation of India (NPCI), Payment Council of India (PCI), and Fintech Convergence Council (FCC).

Signzy has won many awards in the recent past for its technology innovations, some of them being IAMAI’s Most Innovative RegTech Solution Award, ASSOCHAM’s ICT Startup Awards, Technoviti Award 2020 for Video KYC, among others. In the past, Signzy has also won awards from regulatory bodies like RBI and MAS Singapore.

Global Immunoassays in R&D Market to Grow at a CAGR of ~18% during 2022-2031; Market to Expand on the Back of Growing Cancer, Autoimmune Disease, Infectious Disease, Endocrine Disorders, And Chronic Diseases – Kenneth Research

Market Research Report on Global Logistics Automation Market Forecast the Revenue to Reach USD 133 Bn Size By 2030, Growing at a CAGR of 10.7% from 2022 to 2030 – Exclusive Report By Acumen Research and Consulting