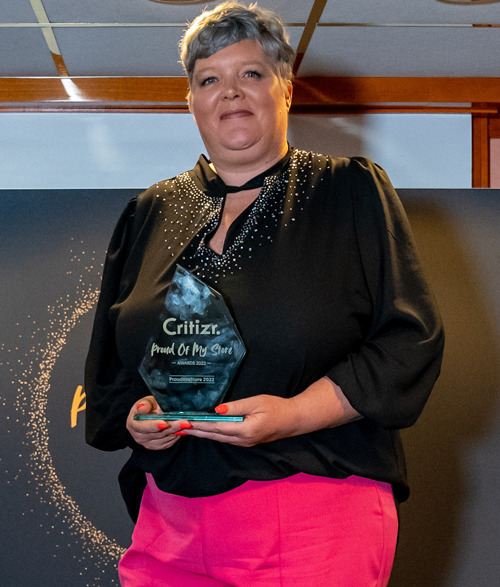 Proud of My Store, the nationwide competition dedicated to celebrating frontline teams in UK retail, has announced its overall 2022 champion: The Original Factory Shop in Haslemere, Surrey.

Out of 300 entries, Karen wowed the judges with her inspiring story of pride, passion and charity commitment, guided by her belief that individual stores should play a vital role in building strong and vibrant high streets and local communities.

Despite being one of the smallest branches in the Original Factory Shop’s 167 strong UK network, the small Surrey-based team pioneered a new approach to charity partnerships, which has now been adopted nationally, earning them a reputation as ‘the smallest store with the biggest heart’.

Their busy programme of charity work includes creating donation stations for their local foodbank; and ‘Trolley Tuesdays’ with foodbank-friendly items priced at just £1. They’ve also partnered with local charity Community Kit Bag, promoting the power of sport for mental wellbeing and offering their store as a free meeting point for local groups.

Karen and her team received their Proud of My Store trophy along with a £2,000 cheque, which will be divided between their favourite local charities. She said: ‘On behalf of the whole team, I’m overwhelmed to receive this honour. I’ve always said we are the smallest store with the biggest heart, and I’m so proud of the team and the work they’ve put in. Being recognised amongst our peers around the UK with this Proud of My Store win means such a lot to us, to our high street and to the whole area. The £2,000 donation will do so much good in our community and I can’t wait to share this good news with our charity partners.’

Founded in 2021 by customer interaction specialists Critizr, the Proud of My Store competition is the only award scheme dedicated to recognising and rewarding the invaluable role local store staff play in retail, highlighting the value great local stores bring to their communities.

Critizr Co-founder and CEO Nicolas Hammer congratulated Karen and her team on their win. He said: ‘The entire team was struck by Karen’s vision for her store. No matter what has been thrown at her, she has never wavered in her belief in the power of local, that local stores are at the heart of our communities. Karen’s store is a masterclass in relationships – from staff to customers, from good local causes to other retailers, she’s playing her part in creating a thriving community and is such a worthy winner. It was an incredibly tough decision to make, though – we received almost 300 wonderful, surprising, emotional, and joyful entries for Proud of My Store. It was a privilege to read every one of them and to see the power of local in action in the UK’s stores. I can’t wait to see what 2023 will bring.’

eCommerce warehouses: Letting the robots take the strain at peak