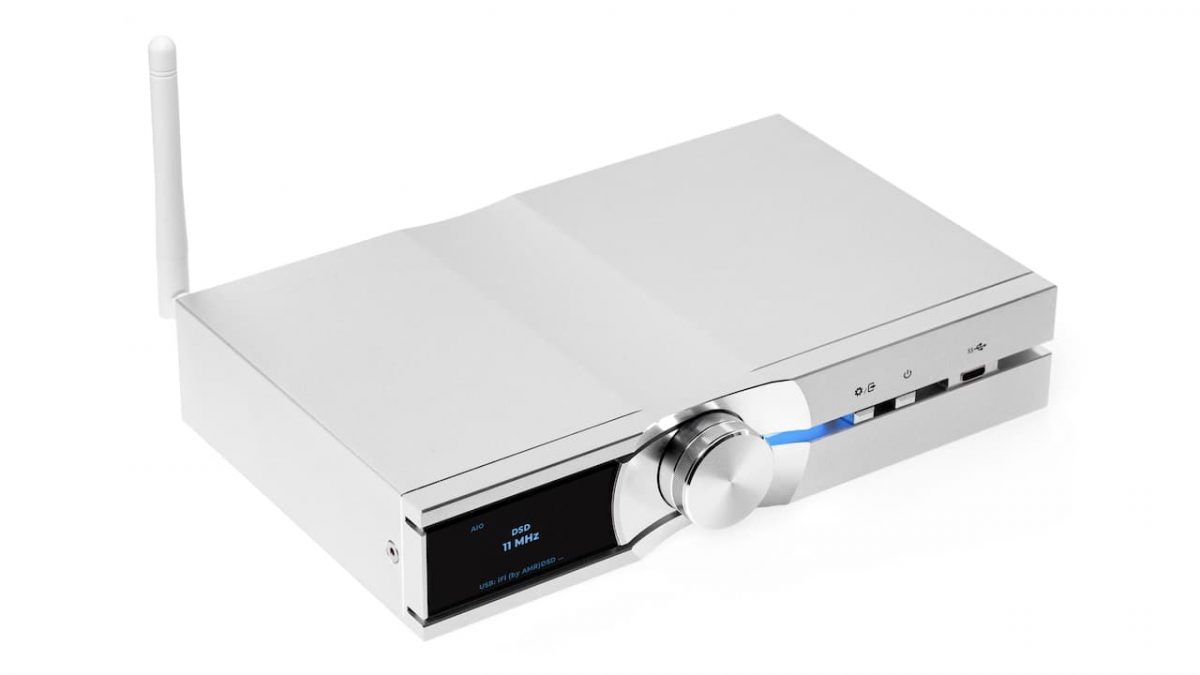 iFi Audio is celebrating a major milestone in 2022 and ten years into its rather unique journey, it is offering something liberating to music listeners who desire the ability to stream how they wish without being tied to any specific streaming platform or OS. The iFi NEO Stream utilizes an open-source architecture to make that a reality but how it actually accomplishes that requires greater explanation.

One claim that we think needs to be mentioned is from their own press release.

“Music listeners are able to access their music through their choice of control app or music platform, and always experience exceptional sound quality, without the exorbitant price tags of other high-end streamers.”

We are big proponents of the open source architecture concept and would agree with iFi that streamers like the Naim Uniti Atom, Andover Songbird, Cambridge CXN V2, Bluesound NODE, and others do use their own operating OS and do promote specific streaming platforms.

But here’s the thing — for the most part they work rather well.

Some of us already use Spotify Connect and TIDAL Connect instead of going through the respective apps built into the streamers.

App development is a very expensive and time consuming endeavor; during our visit to the Focal Powered by Naim location in Houston, we met with members of the Naim team and the company has invested a lot of money into the platform that drives their current (and future) generation of streamers and network amplifiers.

Let’s learn more about what makes the IFi NEO Stream a very different type of streamer.

iFi’s new NEO Stream is built from the ground up to deliver versatility and sonic performance. It combines the latest version of iFi’s network streaming engine with a new DAC stage; connect the NEO Stream to a pair of powered loudspeakers or your existing amplifier and you are ready to go for $1,299.00 USD.

iFi believes the NEO Stream is distinctly different from other music streamers on the market because it is not tied down to any specific streaming platform and is built around their proprietary technology.

NEO by name – and by nature

The NEO Stream is the second device to join the NEO Series – iFi’s mid-level mains-powered range for home use, sitting between the ZEN Series and Pro Series.

The name ‘NEO’ was chosen because the first device in the series, the NEO iDSD, featured an all-new design and several features new to its product category. The NEO iDSD – a DAC/headphone amp with USB, S/PDIF and Bluetooth connectivity – remains current, but while it may be tempting to assume the NEO Stream is a NEO iDSD with a streaming module added and the headphone amp removed, this assumption would not be accurate.

The NEO Stream’s desktop-size chassis and aluminium casework clearly resembles the NEO iDSD. But while its circuitry builds on existing iFi designs, its internal architecture and attributes are unlike anything else on the market.

The DAC is fed by a powerful 16-core XMOS microcontroller, which processes the audio data received at the USB input. iFi’s in-house digital development team has programmed the XMOS firmware to optimise sound quality and ensure a perfect partnership with the Cirrus Logic DAC.

Hi-res PCM is supported to 32-bit/384kHz, alongside DSD64, 128 and 256, and single- and double-speed DXD. The DAC’s architecture maintains DSD data in true native form, unlike other DACs that convert DSD to PCM.

Many audio streaming devices lock users into a specific platform. That is not necessarily a problem, assuming the facilities on offer are in line with the user’s requirements and they are happy with the interface.

But, if they want to select their preferred streaming platforms and apps without restriction, with the ability to adapt and evolve as requirements change, a device with an open-source architecture offers clear advantages.

iFi has developed its own streaming engine, purpose built to deliver flexibility and performance. Its open-source nature, built on a powerful quad-core ARM Cortex processor and Linux-based operating system, enables it to evolve over time, whilst ensuring users are not locked into a specific platform. You choose the way you want stream, select your favorite app or streaming platform and let loose the streaming dogs of war.

From the device drivers, to the kernel (the heart of the operating system), to the shell (which interfaces with the kernel), to the applications and the user interface, everything is fully optimised for seamless operation and excellent sonic performance.

The firmware at the heart of this bespoke streaming engine was first utilized in the ZEN Stream – a ‘streaming transport’ that launched in 2021 – and has evolved significantly since. ZEN Stream users have already benefitted from updates to improve performance and functionality; the NEO Stream combines the latest version of this firmware with enhanced hardware to deliver something truly special.

The Roon platform has become the standard-bearer for high-quality digital music management and streaming, thanks to a great interface, strong flexibility and high-quality sound. The NEO Stream has Roon Ready certification, which means it’s ready to slot straight into a Roon audio environment and work seamlessly with Roon software.

Any DLNA/UPnP-compatible streaming app (for example: BubbleUPnP, mconnect, Audirvana and so on) can be used to control the NEO Stream and access audio content from online services and DLNA-certified network storage devices.

Users of these hugely popular online music services can stream directly from the Tidal and Spotify apps – simple, seamless and effective.

The NEO Stream can operate as an NAA (Network Audio Adapter) in conjunction with Sygnalist HQPlayer software – favoured by many serious music streaming enthusiasts. This means it can direct packets of audio data received over Wi-Fi or Ethernet cable straight to the connected DAC without applying processing.

iFi’s ‘Stream-iFi’ app is simple tool to aid initial set-up of the NEO Stream and initiate streaming from local storage devices – a NAS drive, for example.

The NEO Stream can be used in two ways: connect to an amp and speakers via the onboard DAC stage and analogue outputs, or connect one of the available digital outputs to an external DAC. In the latter mode, the NEO Stream acts as a ‘streaming transport’ or ‘network bridge’, like the ZEN Stream but with a higher level of ‘ultra-resolution’ performance.

Whether the onboard DAC is engaged or not, the NEO Stream’s hi-res audio support is state-of-the-art: PCM data to 32-bit/768kHz, all levels of DSD up to DSD512, and single- and double-speed DXD. Remarkably, this level of hi-res audio is not only supported over the LAN and USB cable inputs but over Wi-Fi too. (A stable, full-strength 5GHz Wi-Fi signal is required for 384kHz PCM, DSD256 and above.)

MQA ­– the hi-res streaming technology, as used by Tidal’s ‘HiFi Plus’ tier – is comprehensively supported, with full decoding of MQA files up to 384kHz. This means that the full ‘three unfold’ decoding process can be performed internally, as opposed to only the final unfold in the manner of an MQA ‘renderer’. When the digital outputs are used to connect an external MQA-supporting DAC, both MQA passthrough and ‘first unfold’ are supported.

The NEO Stream’s integral DAC stage is based around a Burr-Brown chipset that iFi uses extensively, selected for its natural-sounding ‘musicality’ and True Native architecture.

One such critical component is the XMOS chip that iFi uses to process audio data received over the digital inputs. The NEO Stream incorporates a 16-core XMOS microcontroller, programmed by iFi’s in-house team to optimize sound quality and ensure a perfect partnership with the Burr-Brown DAC.

Thanks to the DAC chip’s four-channel True Native design, PCM and DSD take separate pathways and remain ‘bit-perfect’ in their direct-native form, right through to analogue conversion. In the case of DSD, there is no conversion to PCM or application of multi-bit processing – this is unusual and makes the NEO Stream an excellent choice for DSD purists.

The NEO Stream offers a connectivity array that is unique in a network music streamer at its price, both in breadth and specification, providing unparalleled versatility across a range of system configurations.

Several different settings allow users to tailor the NEO Stream’s performance to suit their system and the way they like to stream. For example, users can select between Exclusive Modes – individual settings that optimise performance by focusing operation on one mode of use. There are specific settings for Roon, Tidal Masters, DLNA and NAA, as well as a general mode for multi-platform use.

Further personal tailoring is provided by four user-selectable digital filters, each of which has a subtle but clearly discernible effect on sound. Users can switch between Bit-Perfect, GTO (Gibbs Transient Optimised), Minimum Phase and Standard, according to personal taste and whichever setting best suits their choice of music.

Look for a review of the iFI NEO Stream in Q4 with a number of new active loudspeakers and our existing systems.

Ernie Christian: An Evangelist for American Exceptionalism in All Its Forms

Rocky Times at Roku in Q2 2022: Is Digital Streaming in Trouble?

Amazon Prime Members Can Now Listen to 98 Million More Songs: Just Not In The Order They Might Desire

Pro-Ject Wants You To Touch Your Debut PRO S Turntable