Home > News > In 5 Charts, How Heritage’s Budget Blueprint Would Clean Up Washington’s Mess 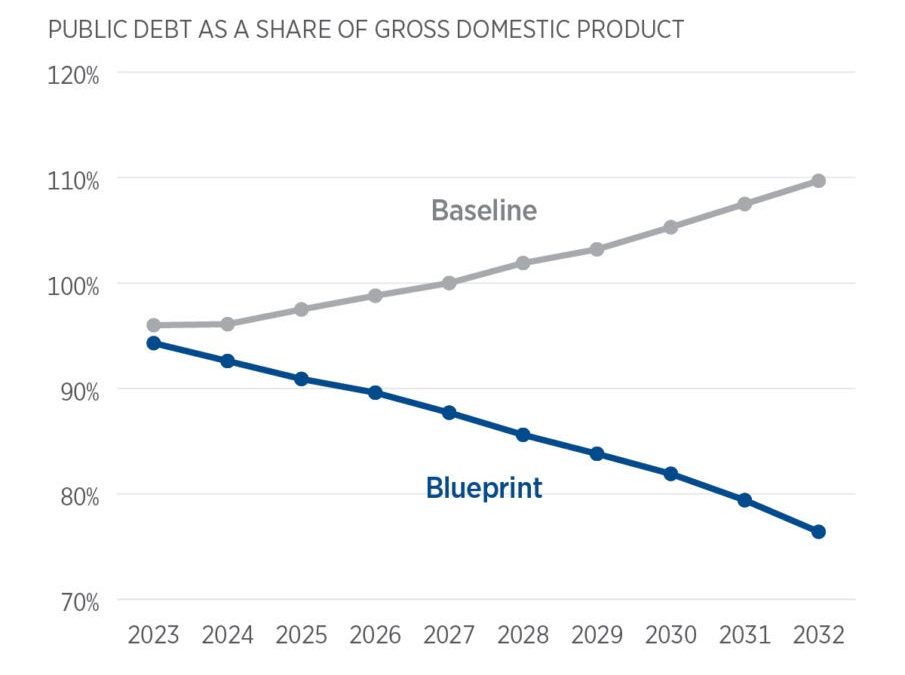 In 5 Charts, How Heritage’s Budget Blueprint Would Clean Up Washington’s Mess

It’s no secret that the federal government’s finances are a wreck. Washington has spent too much and added far too much to the national debt for the sake of political convenience and payoffs to well-connected special interests.

We’re now paying a heavy price for years of irresponsible governing, with inflation hitting 40-year highs. Waves of deficit spending are one of the major contributing factors to these economic woes.

And as bad as things are now, the government is only making them worse for our children, who will have to pick up the tab—in the form of vastly higher taxes, a devalued dollar, and shaky national credit—for today’s spending sprees.

That’s why on Tuesday, Sept. 6, The Heritage Foundation released its strongest and most comprehensive budget proposal to date. The new Heritage Budget Blueprint contains over 230 policy proposals to save taxpayers trillions, reduce inflationary deficit spending, and put the nation on a path to financial stability.

Over a decade, Heritage’s plan would reduce spending by $15.5 trillion. The following charts should help to provide a clear picture of what this approach would mean.

Congress has run up the nation’s credit card to an obscene degree. As the chart above demonstrates, the current policy course would pile on even more debt.

Although absolute dollar amounts matter, the most important way to measure debt is how it stacks up to the size of the economy. Debt has grown much faster than the economy since 2000 and is on pace to continue to do so indefinitely.

The previous high-water mark for public debt relative to the economy came just after World War II, when Washington had to spend massive amounts to save the free world. Yet, if the current situation is left unchecked, we will far exceed all previous public debt records.

The Heritage budget would significantly reduce the deficit starting in the first year and reach balance in the tenth year. This would make an immediate impact on the relative size of the debt and alleviate the long-term risk of a debt crisis.

The Heritage Budget Blueprint would restrain debt by reducing spending, as the chart above shows. In contrast, under current law, federal spending is set to massively outpace economic growth for the foreseeable future.

The main culprit for this unsustainable spending is so-called mandatory spending programs that are allowed to grow year after year on autopilot, to the point where they now represent an overwhelming share of federal spending.

The blueprint also provides a detailed guide to draining the swamp by proposing to wind down or reform a variety of spending accounts that are rarely in the news but funnel billions of dollars per year to wasteful programs and unaccountable bureaucrats.

Examples include eliminating  the Community Development Block Grant program, which is a slush fund used to facilitate outrageous pork projects, and streamlining the overly politicized Centers for Disease Control and Prevention.

Historically, the federal government’s top priority has been national defense. That focus has taken a back seat to a sprawling array of domestic programs and spending, yet Democrats still complain about a supposed lack of nondefense funds.

As seen in the above chart, Heritage’s blueprint would reprioritize national defense. This would move away from the “parity” talking point, where Democrats call for equal increases to defense and nondefense spending while ignoring a wide array of benefit programs that grow automatically every year.

In addition, the blueprint would add value within the defense budget with targeted reforms and investments, ensuring that we get the most literal bang for our bucks.

When we think about what the federal government spends on, the first things that might come to mind are the military or federal agencies. However, Washington’s primary activity is taking money from one group of people (including future generations in the form of debt) and giving it to another. The Heritage Budget Blueprint would tackle the trend of endless wealth transfers head-on.

Major benefit programs such as Social Security and Medicare, sold to the public as being self-sufficient, are anything but. Thoughtful reforms to these programs in the blueprint would preserve and improve them for current and future beneficiaries and retirees by restraining their growth to a responsible rate.

In addition to putting Uncle Sam on a diet, the Heritage Budget Blueprint would take another big step in reforming and shrinking the tax code, building on the success of the 2017 Tax Cuts and Jobs Act.

Changes to individual and corporate taxes would encourage savings and investment, improve America’s economic competitiveness, and eliminate a variety of wasteful and unfair tax credits.

The above chart points out that the blueprint would reduce taxes by an average of over $23,000 per household over the course of a decade, which would be further supplemented with robust growth in jobs and a return to real after-tax growth in wages.

The Heritage Budget Blueprint provides a strong contrast to Biden’s big government vision, which imagines that the federal government can run things better than families, state and local governments, and civil society.

We’re seeing firsthand what happens when too much power, money, and control are concentrated in Washington.

It’s time to turn things around and restore the freedom and prosperity that ought to be America’s birthright.

The post In 5 Charts, How Heritage’s Budget Blueprint Would Clean Up Washington’s Mess appeared first on The Daily Signal.

The Thinnest Veneer of Civilization

US Quietly Sanctions Chinese Companies As Pelosi Lands In Taiwan