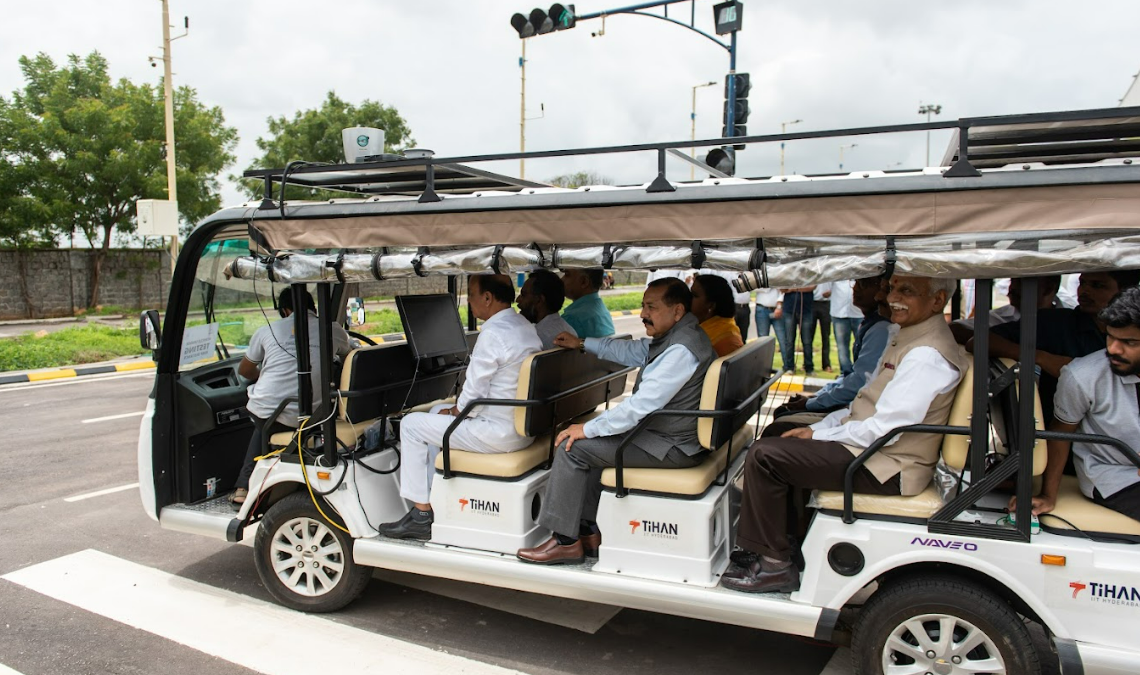 India Gets Its 1st Test-Bed for Autonomous Navigation at TiHAN, IIT Hyderabad

“The TiHAN – IITH will be the source of futuristic technology generation for autonomous vehicles while The TiHAN-IITH testbed on Autonomous Navigations will allow us to test the next generation autonomous navigation technologies accurately and allow faster technology development and global market penetration,” Dr. Jitendra Singh said at the inauguration.

Earlier in last month, a Memorandum of Understanding (MoU) has been signed between the DST NMICPS Technology Innovation Hub on Autonomous Navigation (TiHAN) at IIT Hyderabad (IITH) and the International Centre for Automotive Technology (ICAT) for collaboration in research and development in the emerging field of autonomous navigation.

The Union Minister added, “Setting up of 25 technology innovation hubs by the Department of Science and Technology (DST) across the country under National Mission on Interdisciplinary Cyber-Physical Systems (NM-ICPS) is one of the many programs launched under the leadership of the Prime Minister to make India a frontrunner and destination for futuristic technologies. IIT Hyderabad has been awarded the Technology Innovation Hub in ‘Autonomous Navigation and Data Acquisition Systems, which is a multi-disciplinary initiative, including researchers from electrical engineering, computer science, engineering, mechanical and aerospace engineering, civil engineering, mathematics, design, liberal arts, and entrepreneurship. TiHAN is recognized as a Scientific and Industrial Research Organization (SIRO) by the Department of Scientific and Industrial Research.”

Dr. Singh elaborated, “In synergy with industry, R&D labs, and academic institutions, both national and international, TiHAN is developing and deploying a real-time Cyber-Physical System (CPS) utilizing unmanned aerial vehicles (UAVs) and unmanned ground/surface vehicles (UGV) for many application sectors of national importance. Among the most essential factors for making autonomous and connected vehicles more acceptable to consumers is their effectiveness in realistic conditions. Thus, it is crucial to evaluate these new technologies in a safe, controlled environment before deploying them.”

“In India, the ‘TiHAN-IITH Autonomous Navigations Testbed (Aerial & Terrestrial)’, an integrated test facility for UGVs and UAVs, will be the first test bed facility and will help in validating the autonomous navigation and data acquisition technologies developed for aerial and terrestrial use-cases,” Dr. Singh highlighted.

“Since some time back there was only one IITH in South India, it is glad to see that IIT Hyderabad being a relatively younger IIT making a mark due to its unique initiatives like unmanned vehicles, TiHAN in collaboration with IIT Hyderabad has also established a New Interdisciplinary 2-year MTech program on Smart Mobility, the first of its kind in the country, and is also supporting entrepreneurship and skill development activities in this area of autonomous navigations. From DST, we will always be there to provide in possible ways”, congratulating IITH Director & the team said, Dr. Singh.

Congratulating TiHAN-IITH on occasion, Dr. Srivari Chandrasekhar – Secretary, DST, said, “It is a proud and honor moment for IITH that the minister has given us time to come and see what we are doing here, a great show of how IITH is moving toward autonomous vehicles and how drone technologies are growing up. The minister was advocating how this startup ecosystem would flourish. We all are aware that Bangalore dominates the startup ecoculture. Still, under the leadership of Dr. Jitendra Singh, we are able to push many centres like we have four in IIT Hyderabad, where these startups are happening, including in the remote areas of Northeast India and Jammu & Kashmir. DST has been funding any agency that comes forward to initiate a startup ecosystem by giving infrastructure. Through the technology development board, we are also offering small loans at very little interest.”

“We had witnessed recently, on January 29th, when the bidding retreat happened near Rashtrapathi Bhavan, a program funded by DST and TDB, has showcased how thousands of drones can be integrated and the marvel of drone technologies. Today Prof Murty and Prof Rajalakshmi have shown us how the drone size can be increased so that even human beings can be carried in the drone facility. This Drone and autonomous vehicle technology are certainly going to be the game-changer, especially when you wanted to send the vehicles into places where humans cannot enter, where some chemical poisons are coming out, such as Bhopal Incident. How we can send unmanned vehicles with proper equipment inside the factories to minimize the accidents in agriculture these technologies are going to play an important role. On behalf of the ministry, I assure all of you that who would come and do some startup companies and see that you create some employment and some wealth for the country. DST is there to help you to see that this ecosystem grows. I wish all IITH all the best.” added Dr. Srivari.

Witnessing the TiHAN-IITH this remarkable journey, Dr. BVR Mohan Reddy, Chairman, Board of Governors, IIT Hyderabad, said, “It is another momentous day in the history of IITH as we inaugurated the TiHAN, which is a Technology related hub for Autonomous Navigation. IITH has made tremendous progress under the leadership of B S Murty. Human imagination is the only limitation in terms of the number of applications. We have shown you two applications one is agriculture, and the other is cloud control. Thank Hon’ble Minister, for making time to come to IITH. We need to promote more of the Startup ecosystems; we created the entrepreneurship innovation school, and we have a number of incubation centers in IITH that are very targeted and specific in different areas. So, I would like to encourage our students to start looking at entrepreneurship and the startup ecosystem. Enormous research done here needs to be converted into innovation and applications. What we need to focus on as researchers at this point in time is the Monetization of research. Grants cannot be a one-way stream and continue forever. We need to think is how we can generate more funds from our research. I have confidence in Researchers at IITH like Prof Kiran Kuchi and Prof Rajalakshmi to make the best use of the grant they received.

Expressing delight on occasion, Prof B S Murty, Director IITH, said, “It is a great day for all of us that Hon’ble Minister for Science & Technology Dr. Jitendra Singh Ji is with us to inaugurate TiHAN Testbed and has seen the excellent research that is going on at IITH in the various fields from Healthcare to Autonomous Navigation. This Autonomous Navigation Testbed, inaugurated today, is 1st of its kind in India that is meant for both Ground & Aerial Vehicle testing. The Team led by Prof Rajalakshmi is doing exceedingly well to ensure that India not only becomes Aatma Nirbhar but also becomes a leader in the field of Autonomous Navigation”.

The newly established DST NMICPS Technology Innovation Hub on Autonomous Navigation and Data Acquisition Systems – TiHAN at IIT Hyderabad focuses on the research, design, and development of autonomous navigation and data acquisition systems for UAVs, RoVs, etc. With a synergetic industry and academic collaborations, the hub aims at realizing the utilization of autonomous navigation and data acquisition systems in the Indian as well as international context. The hub would like to accept R&D funding proposals in the field of Autonomous Navigation Systems for Ground Aerial & Water surface Vehicles, application of Autonomous Navigation Technologies in Agriculture, Infrastructure monitoring, Surveillance, Environmental Monitoring, and related areas.

Think You Know How to Spot a Scam? New Visa Report Finds That Even Savvy Consumers Get Tripped Up by the Language of Fraud

#BreakfastWithApple at Croma: Be Amongst the First to Pre-Book the iPhone14 Starting 9th September

Global Cardiovascular Information System (CVIS) Market to Grow at a CAGR of ~8% during 2022-2031; Market to Expand on the Back of Growing Patient Pools Suffering from Cardiovascular Disease – Kenneth Research

CaratLane Records 109 Percent Growth in EBIT in Q2, Despite Dip in Overall Customer Sentiment for the Category