Home > Shopping > InPost reaches 4,000 parcel lockers as it doubles the number of its UK lockers over 12 months – Retail News – A1 Retail Magazine 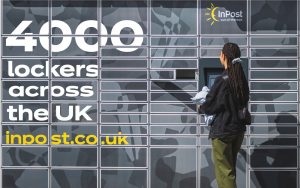 InPost reaches 4,000 parcel lockers as it doubles the number of its UK lockers over 12 months – Retail News – A1 Retail Magazine

InPost, an out-of-home and eCommerce delivery company, has today announced that it has now successfully deployed 4,000 locker units across the UK, having doubled the number of these since last August.

InPost has continued to expand its ever-growing list of partners over the past year, including collaborations with eBay and Vinted that offer an easy option for marketplace sellers to send parcels to any location. The company has continued its rollout of parcel lockers across Tesco’s large-format store estate, announced in September. InPost has also announced its first national indoor locker proposition with WHSmith, which will see InPost lockers deployed in high street stores across the nation.

This sustained growth for InPost is the latest step in making parcel lockers part of everyday life for people across the UK. InPost parcel lockers are mostly available 24/7 and located across the length and breadth of the country including at train stations, major supermarkets, and petrol forecourts.

InPost plans to continue its parcel locker growth in the UK, providing a sustainable and efficient delivery method, especially for big cities. ​​By taking vans off the road, parcel lockers provide a greener last mile delivery option, with one unit having the potential to reduce CO2 emissions by as much as 13,845 kg per year, which corresponds to the purification of the atmosphere by 2,769 trees.

Michael Rouse, CEO at InPost International, said: “We’re truly excited to reach this milestone, which goes to show that parcel lockers are now established as a firm fixture in the UK’s eCommerce ecosystem. This growth, alongside the strong interest from retailers and landlords we’ve seen, proves that there is a serious appetite for convenient and sustainable alternative modes of delivery.”

He continued: “We look forward to continuing this journey and providing even more consumers with a convenient and hassle-free service that helps contribute towards greener communities.”

Trio of new openings at Chinatown London – A1 Retail Magazine

H&M expands at Lakeside – with launch of HOME offer

Café dedicated solely to the Christmas Pudding is coming this month