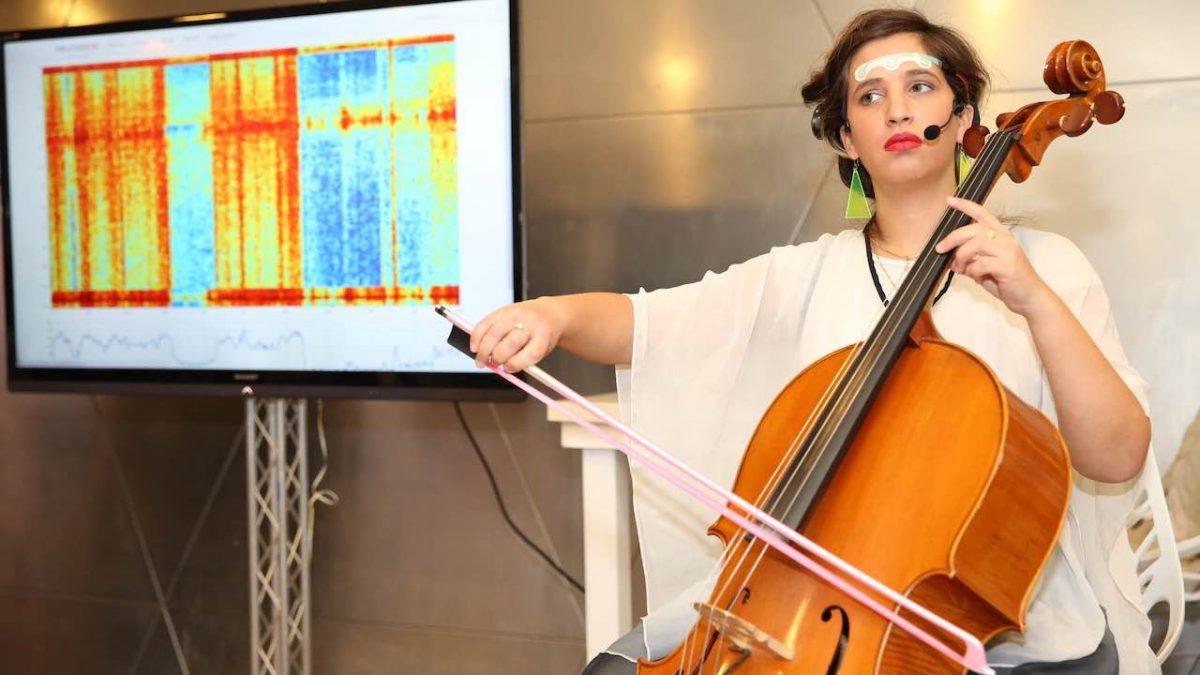 Researchers at Tel Aviv University headed up by Ph.D. candidate Neta Maimon (pictured above) may have determined that music can be used as an effective tool to determine the degree of cognitive decline as one gets older.

The researchers combined the development of a portable device (made by Neurosteer) for measuring and analyzing EEG results with the 15-minute execution of musical tasks.

While attached to the portable device (and also while wearing earphones) the subject (patient) is instructed to perform a series of music tasks.

One example given in the report is that the subject was instructed to press a button each time a violin (or another designated instrument) was played.

Another aspect of the test included several minutes of exposure to “musically-guided” meditation, which also provided feedback on brain function.

We all know that music can affect our mood and alertness. For example, the “Mozart Effect” has shown that people sometimes have improved performance on intelligence tests after listening to Mozart’s music. However, it must be pointed out that Mozart’s music doesn’t directly make one perform better on tests, but the side effect of creating a positive mood creates stimulates that appropriate brain activity.

However, music can sometimes be cognitively challenging when trying to listen to musical details while performing another task at the same time (such as reading or working).

Expanding on the above situations, it was determined that using music targeted in a clinical environment could be used to evaluate a person’s cognitive ability.

The study employed the use of senior-aged participants with different cognitive states in one group and others in a control group. The tests were measured using a single-channel EEG device and analyzed.

The results indicated that the musical test procedure employed provided an effective way to measure a person’s general cognitive state.

Commenting on the results Neta Maimon stated: “We have actually succeeded in illustrating that music is indeed an effective tool for measuring brain activity. The brain activity and response times to tasks correlated to the subjects’ cerebral conditions (correlating to the mini-mental score assigned to them). More importantly, all those who underwent the experiment reported that, on the one hand, it challenged the brain, but on the other, it was very pleasant to perform.”

Neta Maimon also stated: “Our method enables the monitoring of cognitive capability and detection of cognitive decline in the early stages. It could do so by simple and accessible means, with a quick and easy test that can be conducted in any clinic…Screening tests are commonly accepted for a variety of physiological problems such as diabetes, high blood pressure, and breast cancer. But to date, no method has yet been developed to enable routine, accessible monitoring of the brain for cognitive issues.”

Neta Maimon further believes that this way of measuring cognitive decline could:  “…improve the quality of life of millions around the world” by providing more accessible screening than today’s cognitive tests, which are labor-intensive for doctors and normally reserved for people who already have concerns”.

From the administrative standpoint, the test is expected to be inexpensive to conduct with little specialized training needed.

Of course, further research needs to be performed so that the results in this study are verifiably replicated. Although this initial study has been peer-reviewed.

The NAD 3020 and My Quest for the Holy Grail: Exit to Vintage Street

5 Vintage Turntables for Your Stereo System

Japanese Jazz Kissa and the Art of the Piano Trio: Exit to Vintage Street