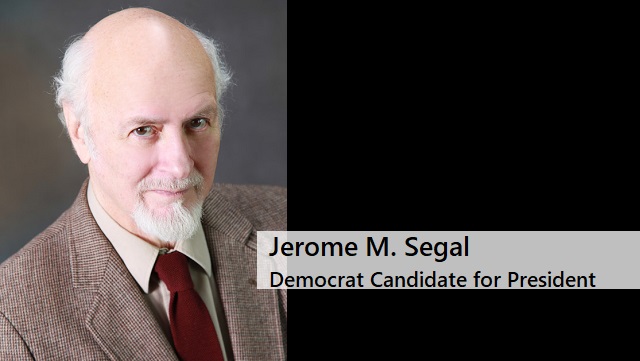 Jerome Segal is challenging Biden for the 2024 presidential nomination SILVER SPRING, Md. /PRNewswire/ — Middle East expert, Jerome Segal, has announced that he will challenge President Joe Biden for the Democratic Party nomination for President in 2024. Segal is the author of a new book, “The Olive Branch From Palestine: The Palestinian Declaration of Independence and the Path Out of the Current Impasse” (with a foreword by Noam Chomsky) – and is one of small group of analysts who believe that now is the time for the U.S. to move forcefully to bring the Israeli-Palestinian conflict to a close.

In 1987 Segal was part of the first Jewish-American delegation to go to Tunis to open dialogue with Arafat and the PLO. Subsequently, he founded The Jewish Peace Lobby, which preceded J-Street by 18 years.

Biden’s trip was, for Dr. Segal, the decisive event. He said:

“My decision was triggered by Joe Biden’s shameful trip to the middle east. In particular by his saying to the Palestinians:

“I know that the goal of the two-state [solution] seems far away… So even if the ground is not ripe at this moment to restart negotiations, the United States and my administration will not give up on trying to bring the Palestinians and the Israelis closer together.

“And then, after making clear that the Palestinians are of zero priority, he travels to Saudi Arabia, to bump fists, in an effort to get the Saudis to abandon a commitment they made to the Palestinians and instead open normal relations with Israeli without Israel having reached a peace agreement with the Palestinians that provides for an independent Palestinian state. This is motivated by Biden’s wrong-headed approach to Iran.”

“It assumes that US-Iranian relations must be confrontational. This reflects a limited understanding of our options in the middle east, and American values and interests.

“Biden’s dismissive attitude towards the Palestinians reveals his failure to understand that the Israeli-Palestinian conflict remains at the heart of the dynamics of the whole region. Were Israel to make a just peace with the Palestinians, the Iranians would respect that deal, and cease support for Hamas and Islamic Jihad if they continued violence against Israel.”

Segal agrees with the President that a negotiated peace between Israel and the Palestinians is not possible. He has an alternative: a UN-drafted peace agreement. In 2012, Segal, with former Israeli Foreign Minister, Shlomo ben-Ami; former European Union top diplomat, Javier Solana; and Nobel Prize Winner, Thomas C. Schelling, published a plan for a new middle east peace process, called UNSCOP-2, to replace the defunct Oslo process. Rather than negotiations, UNSCOP-2 looks to the General Assembly to establish a commission to draft a full end-of-conflict proposal, as was done in 1947, which would then be put to referendums of both peoples.

Segal has discussed this, at length, with Iranian officials and has found them supportive.

In a recent essay in the Palestinian press he urged the Palestinians to take steps for the convening of a Special Session of the UN General Assembly to launch the UNSCOP-2 process, without coordinating their actions with the Biden administration and over Israeli government objections.

Segal came to international attention in 1988 when his writings were widely seen as the catalyst for the Palestinian Declaration of Independence, within which the PLO re-defined Palestinian nationalism by basing their state of the 1947 Partition Resolution which called for two-states, one Arab and one Jewish.

Washington Post Worries That America Has Too Many Catholic Hospitals

NYT Gaslights On The Murder Crisis