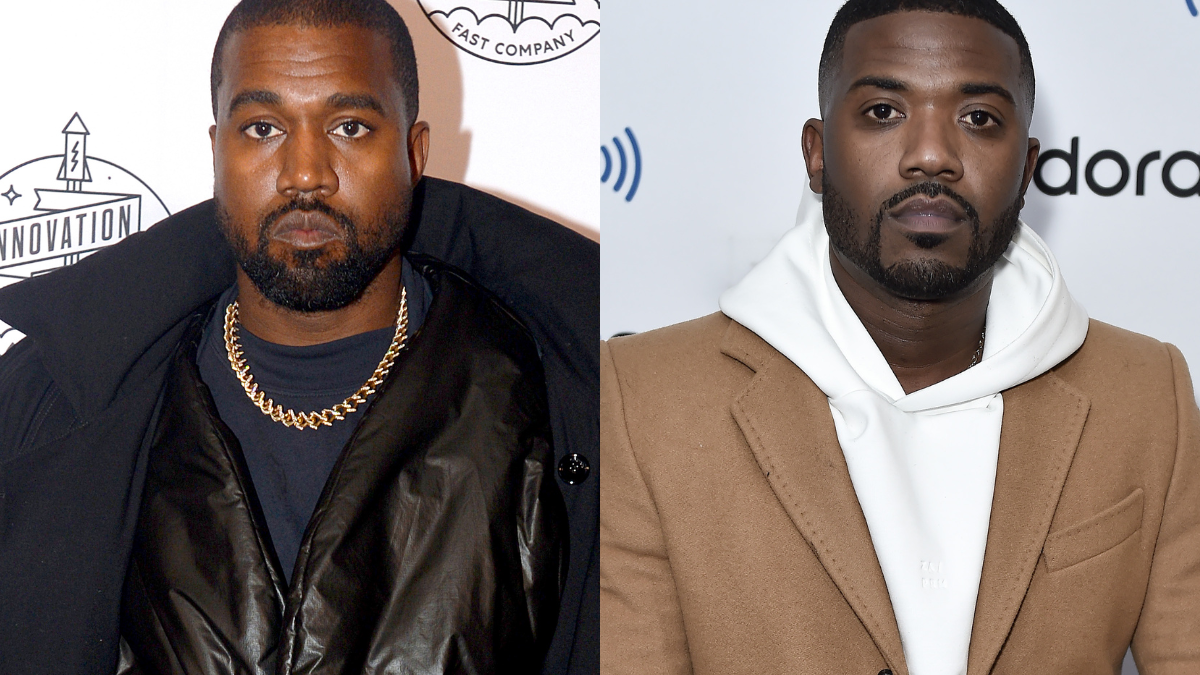 Ray J & Kanye are cool…now? Things seem copasetic between both of Kim Kardashian’s exes after photos of them posted together in Nashville last night surfaced online. The apparently friendly link-up has social media talking since both men recently blasted the same person: Their famous ex, Kim K.

According to paparazzi flicks, Ye and Ray celebrated the screening of Candace Owen’s new documentary, “The Greatest Lie Ever Sold: George Floyd and the Rise of BLM,” Wednesday night.

Kanye surprisingly shared the spotlight with Ray J on the premiere’s red carpet, posing in several photos together, including one with musician Kid Rock between them. This is Ray J’s first public appearance with Kanye since they’ve both exchanged grievances about their past with Kim Kardashian online.

The reunion is significant because Ray J recently blasted a message between himself and Kanye online, alleging that the Yeezy creator betrayed his trust after retrieving a laptop from him to allegedly thwart the release of explicit videos of Kim from the past.

Ray J said Kanye, who asked for the laptop, failed to share how friendly they were, and instead Ye allowed his ex-wife Kim Kardashian paint him as a “bad” person on her Hulu reality TV show The Kardashians. He also claims that there was never an explicit video on the laptop like they were claiming on TV.

Ray J dated Kim in the early 2000s, and the exes both became synonymous with the famous sex tape that launched her television career.

Ray J, however, recently claimed it was Kim’s mother who masterminded the release of the sex tape. The R&B singer went live for over an hour while in Mexico last month, sharing alleged receipts that Kim and her mom are painting him out to be a snake on TV, twenty years after the tape leaked.

Kanye’s recent gripes with Kim is over the education and custody of their four children. The billionaire rapper also went off in a series of post earlier this year, attacking Kim’s then boyfriend Pete Davidson.

Yeezy has also been in headline’s recently over reactions to his “white lives matter” t-shirt he displayed during fashion week.

The Ray J and Kanye reunion seems bizarre to fans who have been following the messy drama in headlines. Scroll down to see some reactions to Kim K’s exes meeting up.

Ray J supporting Kanye’s White Lives Matter meltdown and Brandy in the hospital from a seizure. A coincidence? I think not. pic.twitter.com/5m5Ex4oqEw

Ray J sitting up there with Kanye West & Candace Owens as well. I’ll continue to say it, a lot of cis Black men are the weakest link.. pic.twitter.com/EDvSArdKVP

Ray J and Kanye West are together!

what a weird year pic.twitter.com/GOAUzKjFhM

Nice to see Ray J and Kanye getting along https://t.co/SoKuNPzola