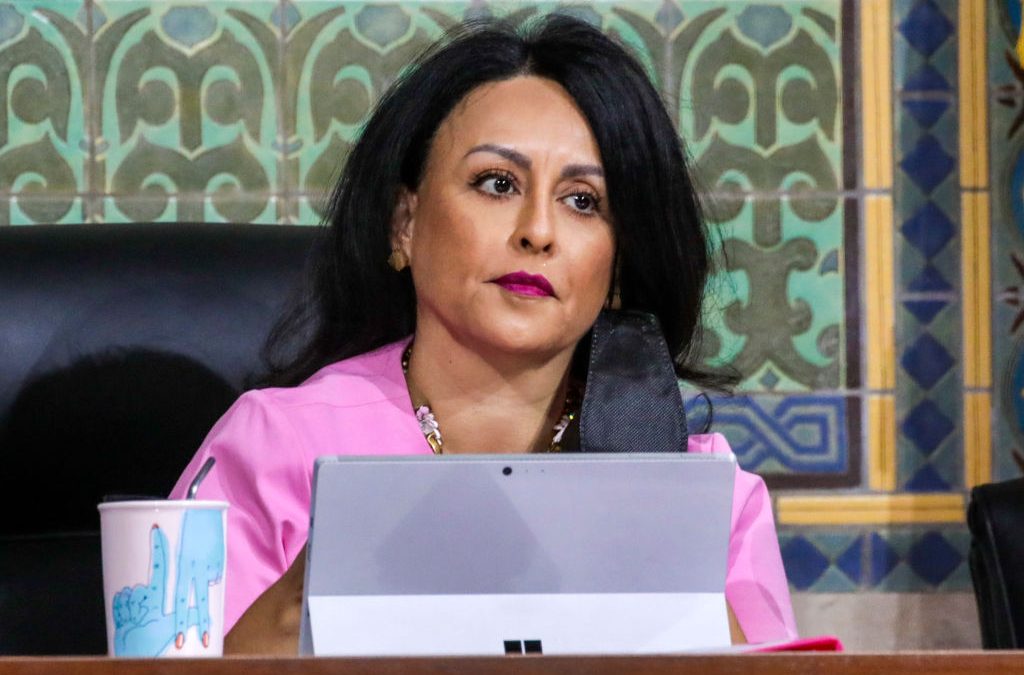 Los Angeles City Council President Nury Martinez has resigned effective immediately after an audio recording was leaked where she could be heard calling a fellow council member’s Black son a “little monkey.”

Martinez has since profusely apologized amidst widespread outrage over the racist comments, which were reportedly made about colleague Mike Bonin’s young son in audio obtained by the LA Times.

The announcement of Martinez’ resignation, which was revealed in an email from the councilwoman’s office on Monday, comes on the heels of a recorded conversation from October 2021 between Martinez and Councilman Kevin de León among other city officials.

The pair were forced to apologize Sunday for the disparaging remarks.

The 49-year-old now-former councilwoman and several other Latino leaders could be heard criticizing Bonin, who is white, and his adopted Black son, saying “they’re raising him like a little while kid,” and “this kid needs a beatdown.”

Martinez also described the councilman’s son as “parece changuito,” or “like a monkey,” while calling his adopted father, who is also gay, a “little b****.”

The hourlong leaked racist audio clip surfaced Sunday when the recording was posted anonymously on Reddit.

The October 2021 conversation in question between Martinez, de León, council members Gil Cedillo and de León, and county Labor President Ron Herrera, was initially about council members’ discussing maps that had been put forward by the city’s redistricting commission.

The Los Angeles Times quickly obtained and published it, causing an immediate backlash as protesters flocked to the now ex-presidents home and called for her resignation.

The protesters were there flouting a law that Martinez herself championed in 2021 that banned protests in residential areas.

Nury Martinez called councilmember Mike Bonin’s son “ese changito,” which means “that little monkey” in Spanish. A recording that captured the comments was leaked and first published on Reddit. She has resigned as president of the Los Angeles City Council.#news #USA pic.twitter.com/4Rm8xyq49w

In a statement released Monday morning, the potential mayoral candidate issued a groveling apology where she said she was ashamed of the comments, and announced she was resigning in response to public backlash over her racist remarks.

“I take responsibility for what I said and there are no excuses for those comments,” Martinez wrote in the emailed statement, which was shared amidst calling for her firing. “I’m so sorry.”

Martinez tried to appeal to her sense of motherhood, and said she “knows better” and “am truly ashamed.”

“As a mother, I know better and I am sorry. I am truly ashamed,” Martinez wrote. “I know this is the result of my own actions. I’m sorry to your entire family for putting you through this.”

While she will be stepping down as president of the City Council, Martinez will keep her seat on the board and will continue to work for the city.

She went on to directly apologize to Bonin, 55, and his partner, Sean Arian, as well as their son.

In her public apology, the official pointed out that she had spearheaded numerous efforts to help minorities in her district, including a 2020 initiative she launched to assist school-aged homeless children.

Nury Martinez called councilmember Mike Bonin’s son “ese changito,” which means “that little monkey” in Spanish. A recording that captured the comments was leaked and first published on Reddit. She has resigned as president of the Los Angeles City Council.#news #USA pic.twitter.com/4Rm8xyq49w

“As someone who believes deeply in the empowerment of communities of color, I recognize my comments undercut that goal,” Martinez said. “Going forward, reconciliation will be my priority. I have already reached out to many of my Black colleagues and other black leaders to express my regret in order for us to heal.”

In response, Bonin told the Los Angeles Times that he was “disgusted and angry and heartsick” over the leaked audio clip.

“It’s fair game to attack me but my son?” he added, calling for the resignation of all three city Latino council members. “You have to be pretty petty and insecure and venomous to attack a child. He wasn’t even 3 years old.

Bonin went on to add that “other than that, I’m speechless.”

Six Haitian Men Missing After Leaving Hotel Without Their Bags, Per Police

Jesse Williams’ Ex-Wife Seemingly Slams How He Parents Their Kids

Lizzo Drops The Video For Her New Single ‘2 Be Loved’ Starring Tyson Beckford!