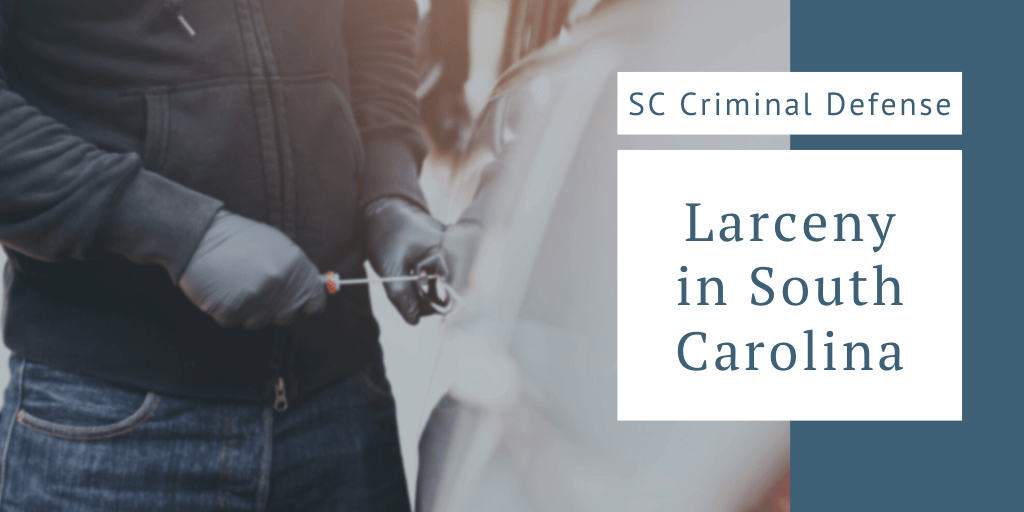 
Chances are you’ve heard the term “larceny” mentioned as a spectator, whether in news stories, police reports, social media posts, or your favorite crime drama series. But if you’re facing charges of larceny, it’s important to know what is considered larceny in South Carolina and what kind of punishments it can carry.

In South Carolina, larceny is defined as unlawfully taking property that belongs to another person, without force, and with the intent to permanently deprive that person of the property. In other words, larceny is the legal term for the non-violent theft of someone else’s personal property without the intent to ever give it back.

It should be noted that larceny is always carried out without the use of force or violence. Theft carried out by force is usually either categorized as armed robbery or strong armed robbery, which are completely different charges. Most often, larceny is committed while the actual owner of the property isn’t even present.

It should also be noted that it is essential for a prosecutor to prove intent in a larceny case. Taking someone else’s property without their knowledge, but with plans to return it, is not considered larceny, but instead borrowing without permission. While not a great thing to do, this is not usually considered a crime except in special circumstances.

Larceny can be charged as either a misdemeanor or a felony.

Larceny charges vary in severity and consequences, depending what category the larceny falls into.

Petit larceny is a misdemeanor charge that is tried in Magistrates Court or Municipal Court, South Carolina’s lesser courts. A conviction of petit larceny can carry a penalty of up to 30 days in jail or a fine of up to $1000.

As a more serious crime, grand larceny is a felony charge that is tried in General Sessions court. A grand larceny conviction is divided into two different categories for sentencing:

If you’re facing charges of larceny in South Carolina, you’ll want a knowledgeable criminal attorney on your side to help you build a solid defense. The legal team at SeiferFlatow understands that even just an accusation of larceny can have a negative impact on your life and will fight on your behalf to deliver the best possible outcome for you. Contact our South Carolina office to schedule a consultation.

Answering Your Questions About Custody and Health Concerns – SeiferFlatow, PLLC

Is a DUAC the same as a DUI in South Carolina? – SeiferFlatow, PLLC

How to Stay Safe on the Roads This Thanksgiving – SeiferFlatow, PLLC