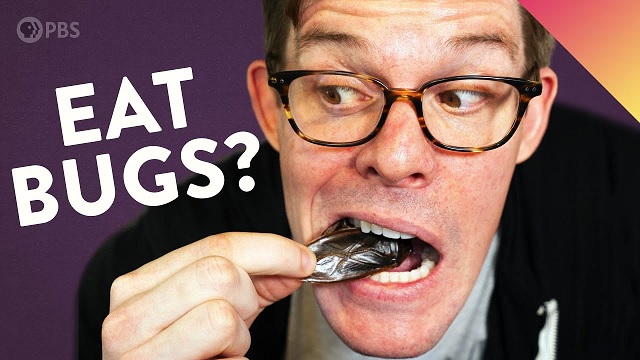 I’ve said many times the keepers of the phony climate change narrative want you to be poor and, today, I’m going to prove it.

First, they want you to stop eating meat and start eating bugs.  Nicole Kidman and Robert Downey, Jr. are among the celebrities telling you to make the switch.  A big marketing, branding, and image campaign is underway to get you to eat bugs.  PBS is part of the effort, with programming designed to convince you insects are tasty and eating them will fight climate change.  One company’s pitch is that caterpillars are a healthier option than steak.  You might want to check your food labels, because it’s already happening.  Hope you’re not allergic.

An agribusiness giant is developing the world’s largest fly factory in my hometown in Illinois. The insect products are meant for animal and fish feed, but also for human consumption.  As with PBS, this wouldn’t be happening without government subsidies.

It’s no accident the campaign to get you to eat bugs has begun at the same time a war on agriculture has started in several countries.  In the Netherlands, the government has cut the amount of fertilizer allowed in full recognition that some farmers will go out of business.  Dutch farmers have mounted large-scale protests, as a result.  Trudeau is pursuing the same plan in Canada.  Sri Lanka tried the same trick previously, only to have food prices skyrocket, bringing down the government.  But look for the war on agriculture to continue.  The UN told the truth in its magazine in 2008: it wants you to be hungry.  “Hunger has great positive value to many people. Indeed, it is fundamental to the working of the world’s economy. Hungry people are the most productive people..,” the article said.  Eat bugs and be happy.  The UN pulled the article off its website last month, claiming it was satire.  Sure.

It’s not only food. The curtain has finally been pulled back on the climate authoritarians’ true plans for the automobile.  Forget EVs.  It’s better you have no car at all, according to the World Economic Forum.  Private car ownership is “wasteful”, they say.  Never mind what you want.  Your desire for freedom and mobility doesn’t matter at all to these people.  They want you stacked and packed in densely populated cities where all you need is Uber and public transit.  To make that happen, they plan to turn great swathes of the country into no-go zones. Their 30 x 30 and 50 x 50 plans will lock up half the land mass of the United States under government ownership.  No joke, this is not speculation.  These plans are out there for all to see, and the climate authoritarians are pushing them hard, now.

It’s no accident our Energy Secretary is cheering record high gasoline prices.  It’s so historic, she says. The green energy transition can’t come fast enough so you will be poor, stuck in one place, and easier to control.  That’s what the climate authoritarians live for.

So, second, no more cars.  Third, you may have heard green energy is unreliable – it doesn’t happen when the sun doesn’t shine and the wind doesn’t blow.  That’s not a defect.  That’s the whole point.  Government officials are deliberately trying to destroy our energy supplies with their wars on coal and oil & gas development and replacing them with toys.  You might think Biden and the rest are merely delusional.  I’m not willing to give them the benefit of the doubt.  I think they hate us and want to control us.  If they can’t control us, they’ll try to destroy us.  It’s what the Left does. Read the history of the Left on this point and weep.

Our would-be overlords want you to be poor, but they have no intention of living by the same rules.  Look at Taylor Swift.  She was just named worst CO2 polluter of the year.  Her defense?  She didn’t make all those trips on her private jet herself.  She loaned the jet out to her friends and that makes it all better.  Do you see it, yet?  She and her friends have no intention of eating bugs, doing without their cars and jets, or being poor.  But these authoritarian creeps want to make it so you have no choice.

RELATED VIDEO: Would You Eat Bugs? Here’s What I Learned When I Tried Them

You will eat bugs, you will live in a pod, you will own nothing. That is the future they have for you. https://t.co/JbjKn25INE

Best Siding Nailer: How to Choose the Right One