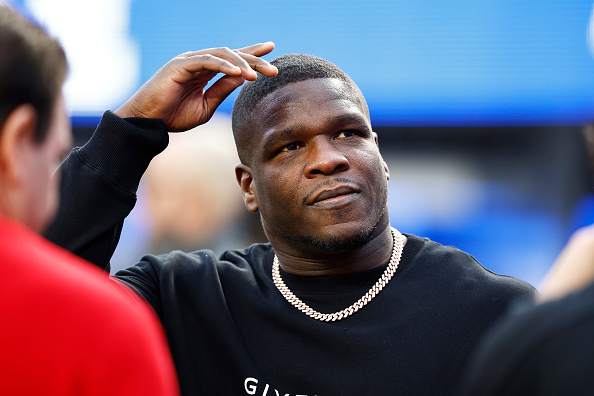 Former NFL star Frank Gore is being accused of dragging a naked woman by her hair across a hotel hallway during an altercation last month in Atlantic City, New Jersey, according to court documents obtained by TMZ Sports.

Authorities say Gore, who’s widely considered to be one of the greatest NFL running backs of all time after rushing for 16,000 yards in his 16-season career, “forcibly” grabbed the woman by her hair before “violently dragging her nude person along the floor of the 59th hallway” of the Tropicana Casino’s Havana Tower.

The outlet reports that Atlantic City cops were initially called to the scene around 8:11 a.m. on July 31, however they did not make any arrests after noting the 28-year-old woman “did not exhibit signs of injury.”

The 39-year-old, who’s played for the likes of the San Francisco 49ers, the Colts, Dolphins, Bills and Jets, was eventually charged days later with simple assault after police said they further investigated the woman’s claims.

It was still unclear the exact nature of the relationship between Gore and the woman. According to court records, Gore is due in court for a hearing in the case in October.

He’s yet to publicly comment on the accusations as of Wednesday.

Today was a great day!!!
Want to thank my team for all the hard work‼️🙏🏿 pic.twitter.com/k5Y2n5Nhh7

Gore has since made the move to celebrity boxing after retiring from the league in June of this year, winning his last fight in May over Yaya Olorunsola.

Domestic violence has been an issue at the forefront of the NFL in recent years, after high-profile incidents including that of Ray Rice and Zac Stacy.

However, basketball players have the highest arrest record of the four, with domestic abuse topping the list of offenses, according to All Pro Bail Bonds.

Microcellular Plastics Market Size to Surpass USD 24,680Million by 2030 Due to Increased Preference for High-Performance Materials