Home > News > ‘Our Voices Can No Longer Be Denied,’ Says Detransitioner in New Documentary 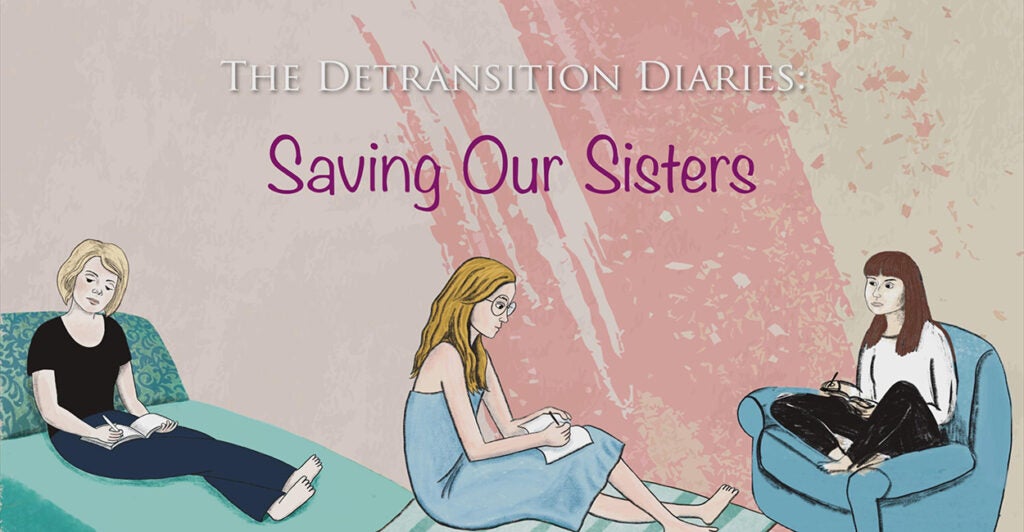 ‘Our Voices Can No Longer Be Denied,’ Says Detransitioner in New Documentary

A documentary, released Monday, unveils the stories of three women who previously identified as transgender in a futile attempt to escape depression and suicidal thoughts.

Jennifer Lahl, a former pediatric nurse and current president of The Center for Bioethics and Culture Network, produced her most recent documentary, “The Detransition Diaries,” after a series of films highlighting bioethical issues.

Her film tracks the stories of Helena Kerschner, Grace Lidinsky-Smith, and Cat Cattinson, three women who believed their mental and emotional trauma would be solved by transitioning to the opposite sex. Each woman underwent hormone treatment and one had her breasts removed as well.

“We are following the news and the studies, and the evidence that shows this uptick in rapid-onset gender dysphoria [is something] young girls are particularly prone to,” Lahl told The Daily Signal in a phone call. Gender dysphoria refers to the condition of persistently and painfully identifying as the gender opposite one’s biological sex. “Young girls are getting sucked into this.”

Rapid-onset gender dysphoria is a recent phenomenon in which children and adolescents are suddenly, and without prior indication, identifying as the opposite sex.

Lahl found that her previous documentary “Trans Mission: What’s the Rush to Reassign Gender?” struck a chord with a broad audience. First-hand accounts of men and women who “believed they were born in the wrong body” and thought gender transition “was the solution to all their problems” resonated with thousands of people, Lahl explained.

“As documentary filmmakers, we made the editorial decision that we are going to focus on women, realizing that this applies to men too,” she remarked on her most recent film.

Helena Kerschner, one of the detransitioners featured in Lahl’s film, says she struggled with depression, isolation, self-harm, an eating disorder, and suicidal thoughts as an early teen. She was introduced to the transgender belief system through Tumblr culture at 13.

After she came out as transgender, teachers and adults who never noticed her struggles before suddenly “bent over backward” to accommodate her new-found identity.

She did everything to make herself appear masculine. Eventually, Kerschner was prescribed testosterone at 18 after a single consultation at Planned Parenthood.

After a few weeks, she noticed how irritable she had become. “I couldn’t control myself,” Kerschner recalls in the documentary. When she got angry, she felt she needed to hurt someone—so she hurt herself. She eventually resorted to the emergency room, where staff directed her to the psych unit. Doctors diagnosed her with borderline personality disorder and psychosis, and sent her home with prescriptions for four different medications. She wound up in the hospital a few weeks later.

“My life became a total disaster,” she says. “I wasn’t functioning, I couldn’t hold a job, I wasn’t going to school—I felt like a monster.”

Seventeen months later, she stopped taking testosterone. Her negative symptoms vanished. During this time, not a single medical professional suggested that her hormone treatment was causing these symptoms, she remarks in the film.

Grace Lidinsky-Smith, another detransitioner featured in the film, noted that she felt a rush of energy when she first started testosterone treatment. Though she had some underlying anxiety, she told herself this was “internalized transphobia,” she says to the filmmakers.

Cat Cattinson describes a similar euphoric feeling when she first went on testosterone.  It was “one of the better antidepressants I had taken,” she recalls.

Lidinsky-Smith, unlike the other two women, went forward with a double mastectomy. Looking back, she believed she would feel better “because she’d be in a body that fit her better.” After her breasts were removed, she recalls, she looked down at the gashes on her chest. “I had the most awful feeling.”

She found others online also had an “intense, suicidal despair after surgery… and then got over it and felt better.” But the experience planted a seed of doubt, she explains. She found a testimony of another person who had transitioned from female to male. As the person described, a desire for “a small amount of masculinization” led to full-out body dysphoria.

At that point, Lidinsky-Smith stopped testosterone and slowly reversed course, eventually growing comfortable enough to use her birth name. “It became important to just accept myself as myself,” she explains.

Kershner and Cattinson described similar breaking points. Kershner realized: “This is not what I thought it would be,” adding that she believed “once I’m a boy, my confidence is gonna come out.” Instead, as she describes, she became dysfunctional.

As Cattinson explains, three months into her testosterone treatment, she found a dramatic drop in her voice. “Nothing was coming out except air and squeaks,” she describes. She stopped going to social events and performing live.

Like the other women, she found an online community of detransitioners and doctors who revealed the hidden underbelly of the trans movement.

She began questioning the basis of transgender ideology: the “idea that we should define a woman based on what’s in a person’s head,” as she describes it. Does “what you believe in your head… really trump the biological reality of being an adult female?” she wondered.

As the documentary concludes, Lidinsky-Smith notes that she is worried about those who continue to get sucked into gender transition treatment, when they can find the answer to their problems elsewhere.

All three women interviewed suffered from suicidal ideation and depression. Each believed that changing her name, pronouns, appearance, and hormones would solve her problems, yet each found her emotional state dramatically worsened as a result.

“I think the fallout will be severe,” Lidinsky-Smith notes. Remarking on the growing community of detransitioners, she adds, “our voices can no longer be denied.”

The post ‘Our Voices Can No Longer Be Denied,’ Says Detransitioner in New Documentary appeared first on The Daily Signal.

Mom Explains What It Took to Rescue Daughter From Transgenderism

EXCLUSIVE: Santorum: Mar-A-Lago Raid Is Another Reason For A Convention Of States