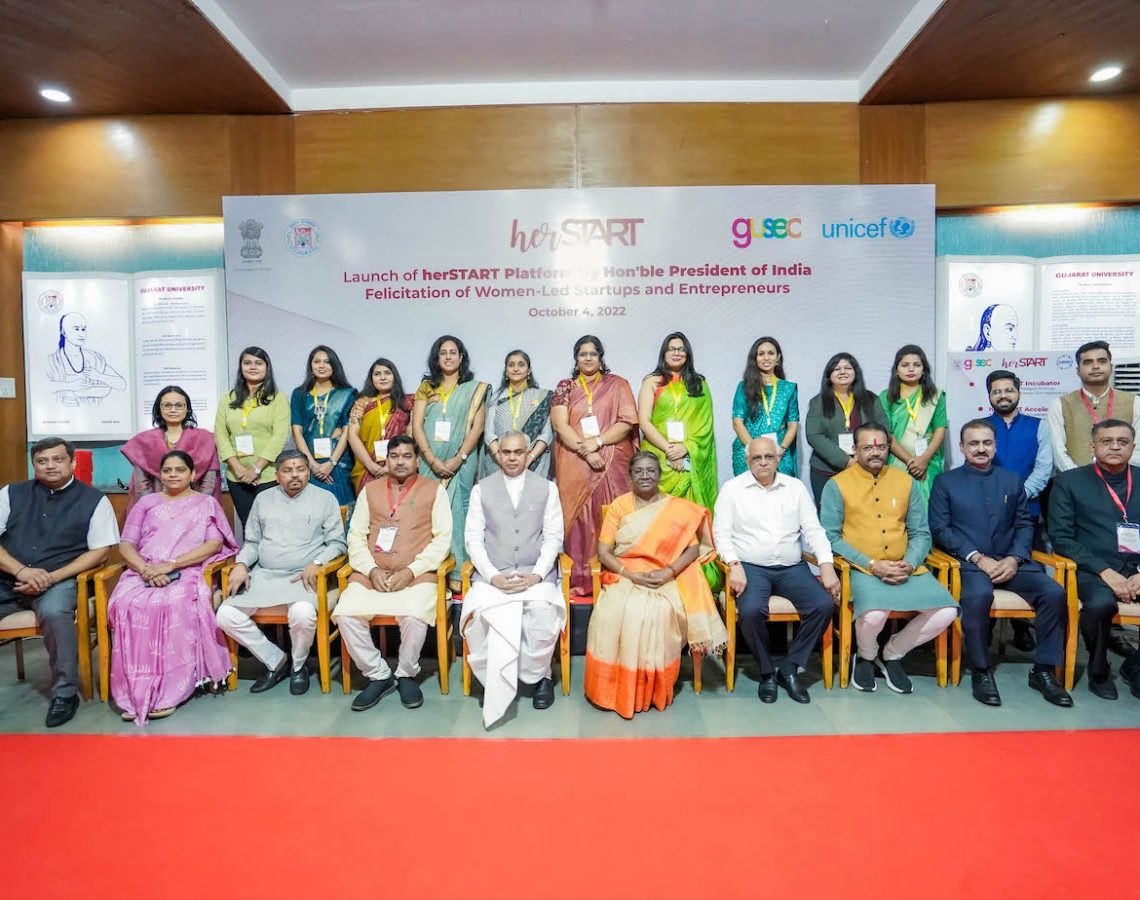 In a major boost to women entrepreneurs in the nation, Hon’ble President also launches herSTART Incubator and herSTART Accelerator, established with the support of UNICEF

The President of India, Smt Droupadi Murmu, launched ‘herSTART’ – a start-up platform of Gujarat University in Ahmedabad today (October 4, 2022). She also inaugurated/laid the foundation stone virtually from Gujarat University for various projects of the government of Gujarat related to education and tribal development

Speaking on the occasion, the President said that it is a matter of pride for Gujarat University that not only Prime Minister, Shri Narendra Modi but also the father of India’s space program, Dr. Vikram Sarabhai; former chairman of ISRO, Dr. K. Kasturirangan; and Union Home Minister, Shri Amit Shah are alumni of this university

The President said that she was also happy to inaugurate projects like Sainik School, Girls Literacy Residential School and Eklavya Model Residential School related to education, especially girls and tribal education in Gujarat. Because the foundation stone for further strengthening India’s position in science, research and innovation will be built through school education.

The President said that Gujarat has made remarkable progress in the field of education among other sectors. The school drop-out rate in the state has come down from 22 percent to 1.37 percent in the last two decades. The teacher-student ratio has also improved from 40 to 26. Today, through ‘Vidya Samiksha Kendra’, real-time monitoring of students and teachers is being done in about 55,000 schools, which is resulting in an increase in the learning outcome of the students. She noted that under the ‘Mission School of Excellence’, a target has been set to upgrade the infrastructure of about 20,000 schools in the state in the next five years.

The President noted that Gujarat has also made significant progress in the field of higher education. While the number of colleges in the state was 775 in 2001-02, in 2020-21 this number increased to more than 3,100. India’s first education quality and monitoring cell, ‘Garima Cell’ has been established in this state for evaluation of higher education. She said that with the effective implementation of ‘Van Bandhu-Kalyan Yojana’, there has been a significant increase in the literacy rate in the tribal society. This scheme has also improved the school dropout rate among tribal students.

The President said that Gujarat has been a leading state in the last two decades on many parameters of development. It has presented many benchmarks in the inclusive development of industry, innovation and infrastructure

The President said that every state has its own model of development which is determined by the resources and needs of the state. But the manner in which Gujarat has made all round progress, has shown the path of inclusive development to other states. She expressed confidence that India will secure its place as a developed country during Amrit-Kaal, if all states move forward by learning from each other and adopting their successful models.

India Gets Its 1st Test-Bed for Autonomous Navigation at TiHAN, IIT Hyderabad