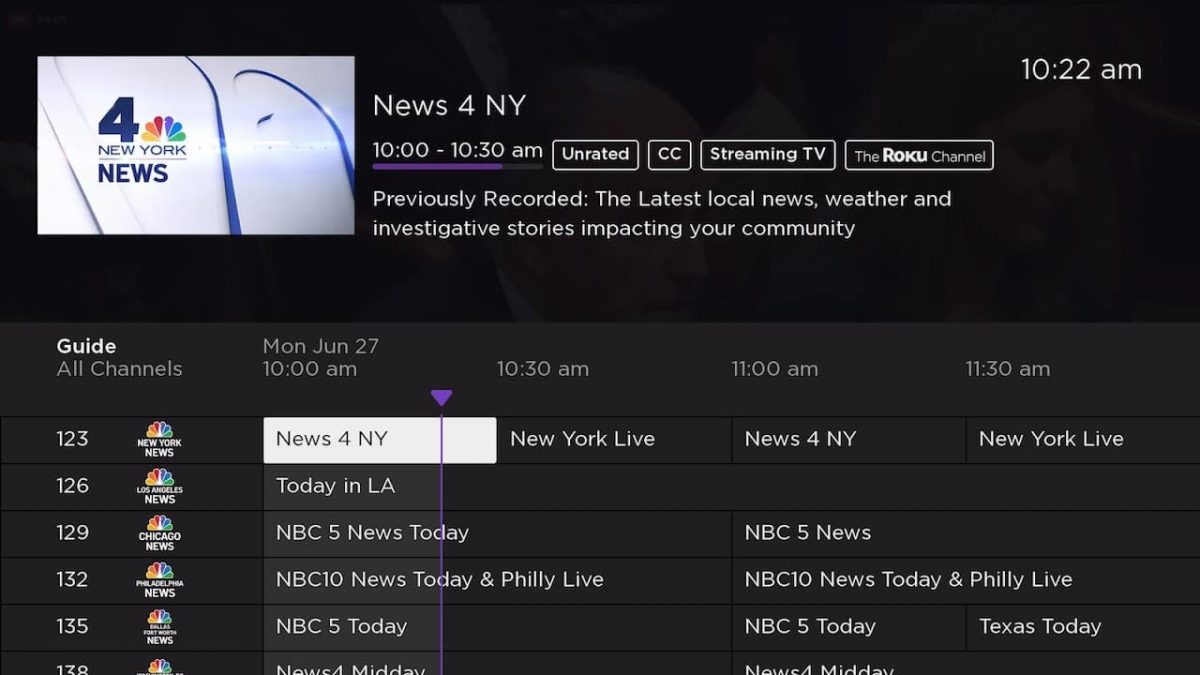 Although cord-cutting is not without its issues, it is still stealing a lot of viewers away from cable and satellite. However, in order to get back local TV channels, often you need to connect an attenna to your TV and hope that your TV reception is good enough to get those channels back.

However, if the only reason you need local channel access is to watch live local news, some stations around the country do offer apps on Roku (and other streaming devices) that allow you access some of their news content.

To provide viewers with easy access (you don’t have to hunt for individual station apps), Roku has announced a new partnership with NBCUniversal Local to bring several NBC local news channels to its popular Roku Channel’s live TV Guide.

Through the partnership, NBCUniversal Local will bring local news channels from its NBC stations from major markets around the United States via The Roku Channel.

Channels arriving on The Roku Channel include:

Additional NBCUniversal Local channels will be added to The Roku Channel’s Live TV Guide in the coming months. This partnership with marks the first time that local news programming will be available for users on The Roku Channel.

From Ashley Hovey, Head of The Roku Channel: “Audiences are increasingly opting to consume news through streaming, and local news has consistently been one of the top-requested categories by our users… we’re excited to work with NBCUniversal Local and the NBC Stations to expand our relevant live TV offering for streamers and to bring news from multiple major cities to millions of viewers across the country to easily access and enjoy.”

From Meredith McGinn, Executive Vice President of Diginets and Original Production, NBCUniversal Local: “Local news has never been more vital to helping our audiences stay informed about what’s happening in their communities…We look forward to bringing our NBC local news channels and our stations’ best-in-class journalism to the millions of people The Roku Channel reaches and to launching more of our NBC local news channels to expand streamers’ access to our local news content.”

NBCUniversal Local delivers English and Spanish speakers and bilingual audiences in 31 U.S. markets and Puerto Rico, the very best in local sports, news, weather, consumer and investigative reporting, and lifestyle entertainment across any platform and screen.

In addition to linear TV, the Roku Channel also features more than 80,000 free movies and programs, as well as Premium Subscription options from over 50 content partners.

The Roku Channel is not only available on Roku devices, but on Web browsers, iOS/Android devices, Amazon Fire TV, and select Samsung TVs. It can be accessed in the U.S., Canada, and the U.K.

More NBC local news channels are expected to arrive on The Roku Channel in the coming months. If this partnership proves successful, you may see live local TV options from other networks coming to Roku and the Roku Channel.

What About NextGen TV?

What is interesting is that just as local live TV is making moves into the streaming space, the U.S. is in the midst of a slow transition to ATSC 3.0/NetGen TV over-the-air broadcasting that is bringing advanced features to TVs viewers via an antenna (at the TV station’s discretion) including support for:

The question for the long-term is whether by the time the ATSC 3.0/NextGen TV roll-out is complete will it still be relevant if local broadcasters go full-streaming?