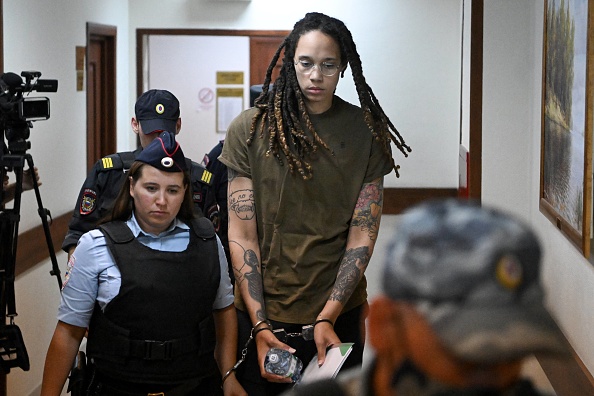 Russian prosecutors are asking the court to hand down a 9 1/2 year prison sentence, to be served at a penal colony, for WNBA star Brittney Griner in her cannabis possession trial, according to the Washington Post.

The hefty sentencing was sought during closing arguments in a court outside of Moscow Thursday, as her nearly six-month trial nears its end.

Griner was infamously arrested at a Moscow airport back in February, reportedly while in possession of marijuana vape cartridges.

The 31-year-old American had previously pleaded guilty and acknowledged having the contraband in her luggage but maintains that “there was no intent” and that she didn’t want to break the law, which may help her in receiving a leaner sentence.

While Russian courts rarely acquit defendants, judges there have quite the leeway when it comes to lenient sentencing.

According to AP, the two-time Olympic gold medalist’s attorney had shared with the Russian court a U.S. doctor’s letter recommending the athlete use medical cannabis to treat pain.

“The attending physician gave Brittney recommendations for the use of medical cannabis,” said her lawyer, Maria Blagovolina. “The permission was issued on behalf of the Arizona Department of Health.”

On July 27, Griner testified that she was provided with a language interpreter while being detained, however, the interpreter only translated a portion of what was being said to her while she was held for questioning.

During testimony last month, Brittney described the 13-hour flight she had to travel to Moscow, Russia from Arizona after recovering from COVID-19.

Brittney maintains that she doesn’t know how cannabis oil ended up in her bag when she attempted to leave Russia, but suggested it could have ended up there because she had packed her luggage in a hurry.

The case has drawn international scrutiny from the beginning, with many believing Griner is a political pawn in a chess match between Russia and the United States.

Several celebrities have been vocal in their support of Griner, with the likes of Chris Brown, who defended her in an Instagram Story last month, as previously reported by The Shade Room.

Did Aubrey O’Day Photoshop Herself Into Exotic Vacation Photos?