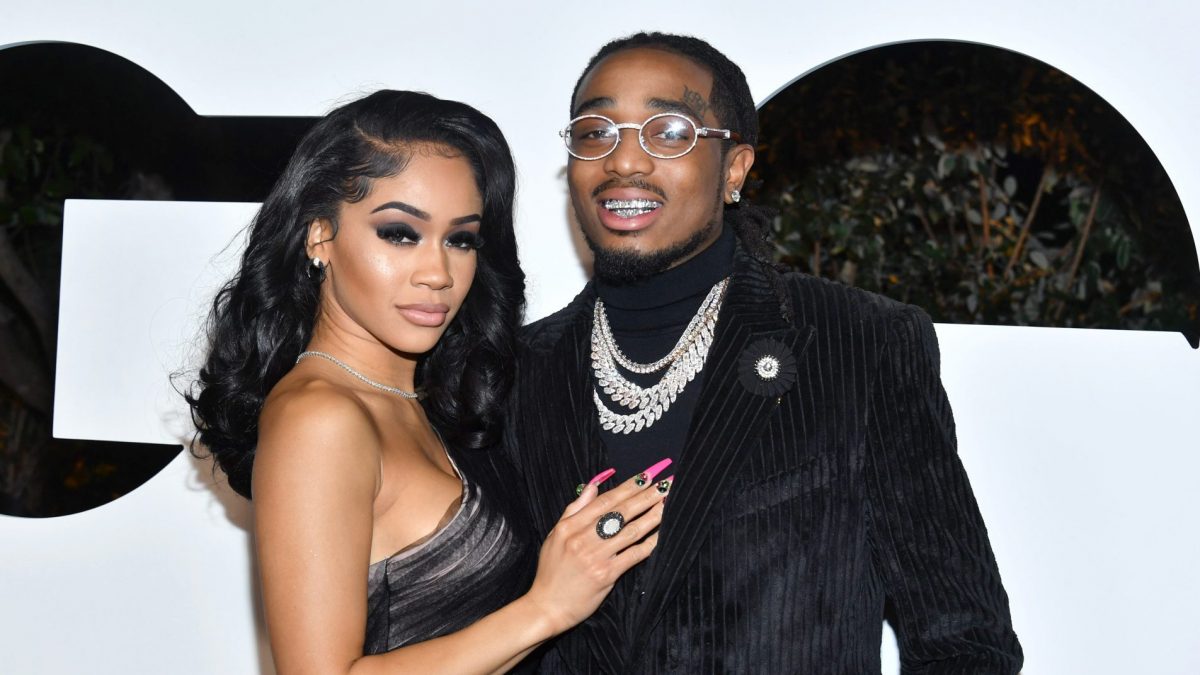 Saweetie once believed Quavo was her soulmate. But Thursday (September 9) was the first time fans heard this from the Icy Queen’s lips after more than a year of being single. The rapper appeared on episode five of Caresha Please. For nearly the first half of the interview, Yung Miami got straight to the point with questions about the romance that lasted three years. And Saweetie didn’t hold back when speaking about why she loved Quavo.

“I thought we was gon spend the rest of our lives together,” Saweetie said. She added, “with him, I just knew it was the one. It was different.”

And Caresha wasn’t shy about pressing the statement with Saweetie. Later in the talk, she asked Saweetie to explain what made Quavo special for her.

At one point, Yung Miami asked Saweetie if Quavo cheated on her. The artist chose not to comment, instead saying she’s beyond the past.

“I think the past is just the past and I’ve moved on since then,” Saweetie said. When asked if the union was toxic, Saweetie said, “I think we had a lot of growing pains together.”

As for why things ended, Saweetie said “differences” and kept it at that. Saweetie announced her solo status via Twitter in March 2021. She wrote, “I’m single” before admitting to experiencing “betrayal and hurt behind the scenes.”

Saweetie was silent on what exactly caused the hurt back then and during the episode. Last year, speculations about the breakup went wild after an elevator video surfaced within a week of the single announcement. In the audio-less clip, she and Quavo were tussling over a bag. After a few seconds, Saweetie fell to the ground and eventually exited the elevator. By the next day, Saweetie issued a public statement about the altercation.

“This unfortunate incident happened a year ago, while we have reconciled since then and moved past this particular disagreement, there were simply too many other hurdles to overcome in our relationship and we have both since moved on,” Saweetie said in a statement. “I kindly ask that everyone respect my privacy during this time.”

Caresha did get Saweetie to talk about the bag in the video. For weeks, social media questioned what was inside the orange suitcase. The bag was a Call of Duty one, per Saweetie. However, she kept all the details about the problem that led to the incident to herself, except for a lil’ sound.

Quavo also spoke with GQ about the video in July, saying he didn’t like the public perception of the incident.

“If I can ever speak on it, I never once in a million years want to do any harm to any woman, period,” Quavo said. Later in the interview, he added “I don’t like what people think. When they saw the elevator thing they thought it was abusive, soemthing crazy.”

Saweetie let out a loud laugh before saying she copped herself a Rolls Royce afterward because she had grown accustomed to the experience.

And The Alleged Shopping Trip With Lil Baby…

As stated, Yung Miami was bold with her questions–even addressing the alleged Lil Baby shopping spree. Caresha asked her to confirm Baby spent $100,000. Saweetie kept it quiet, saying, “I don’t shop and tell,” with a laugh. She added that the story “unraveled to something that it wasn’t.” Meanwhile, in Saweetie’s world, she’s “living [her] life.”

Saweetie Says 2021 Was Tough, But She’s In A Better Place Mentally

Despite the shopping sprees and dating rumors, Saweetie admitted last year was difficult for her. However, she said the dust is finally settling this year.

“I’m much better than last year,” Saweetie said. “I feel like I had to overcome a lot last year and I’m finally getting back to my center self.” She later added, “Last year was hard for me. I lost someone who I loved. You know when you think someone is your soulmate and you don’t end up with them, it’s hard. You know, a lot of people thought that I was just having fun living the single life, but I was hurt. Like I really loved him. And I was just doing a lot of soul searching.

Saweetie also said that sometimes her problem is thinking long-term; when that plan doesn’t come to life, her dreams “be like shattered.”

Besides the heartache of the split, Saweetie said the romance taught her “how to be a woman.”

‘I Shall Endeavor To Serve You’: Charles Praises Elizabeth In First Speech As King