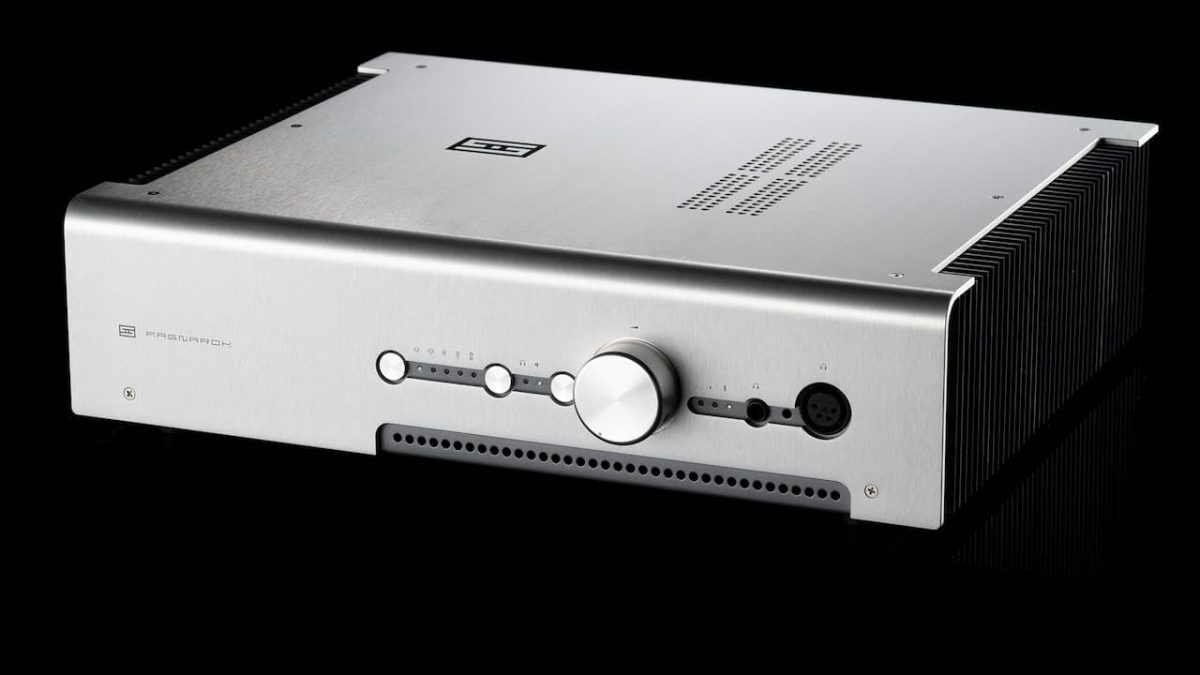 Integrated Amplifiers have become a huge segment within the high-end space and it is not hard to understand why. A quick search through our archives over the past two years will reveal that we’ve covered a lot of them and there are more to come in July and August. Products like the Schiit Audio Ragnarok 2 Integrated Amplifier are slightly different due to their modularity and focus on delivering a superior headphone listening experience as well.

Consumers demand simplicity without sacrificing sound quality when it comes to this segment and brands like Rotel, Cambridge Audio, Naim, NAD, Audiolab, and Yamaha are delivering solid products that a lot of consumers can afford.

The Ragnarok 2 falls below $2,000 fully loaded and while it is not the most powerful in the category — it is one of the more intriguing products for sure.

More than a few eCoustics staff writers and editors own one and use them with a rather wide range of loudspeakers.

California is Schiit For Business

For over 10 years, Schiit Audio has been one of the lynchpins of the high-end personal audio category; Jason Stoddard (Sumo) and Mike Moffat (Theta Digital) did not just magically appear and start offering their wide range of affordable DACs, headphone amplifiers, stereo amplifiers, phono preamplifiers, equalizers, and accessories. Both of them have long and distinguished track records of designing excellent high-end audio components going back to the 1980s.

Theta Digital were one of the leading brands in the high-end digital category for a decade and it is odd to read the comments on some of the audio forums criticizing their credentials; they made high-end digital audio affordable and their work in the personal audio space has changed everything on the affordability side.

I’m sure there are plenty of audiophiles who will disagree with my statement that the Schiit Yggdrasil DAC and Ragnarok Integrated Amplifier were the two products that convinced a lot of audiophiles that Schiit Audio components are capable of competing against far more expensive products and best them — it’s something that I truly believe to be true.

Many of us within the Head-Fi space purchased both as the main components for their headphone systems; a fully loaded combination would run you almost $4,200 USD in 2022. The headphone amplifier in the updated Ragnarok 2 is significantly better than what you would find in any integrated amplifier below $5,000 right now.

Schiit started in California and still manufactures most of its components there, but the move to Texas is certainly underway. California is not an easy place to manufacture electronics and the brand is competing in a very crowded space with a lot of products that are made in Asia for less.

The Schiit Audio Ragnarok 2 is not just a simple update of the original model; it is fair to call it a complete redesign including Schiit’s Nexus current feedback amplifier technology, a new modular internal layout which allows you to order two different versions of the amplifier which can include a DAC and MM phono pre-amplifier.

The metal remote control is a very nice touch in a segment where everything is cheap plastic.

On loudspeakers like the Magnepan LRS, the Ragnarok sounds rather spectacular but you really need to turn the volume to almost two o’clock to have the sound really open it; two of us have run the combination with Maggies and the experience has been the same.

On the headphone side, the Ragnarok 2 offers almost 1.5 watts from the balanced outputs into 600 ohms; the single ended outputs offer almost 6 watts into 32 ohms.

It is a great headphone amplifier for those who enjoy listening to first or second generation Beyerdynamic T1’s; the power and tonal balance are almost a perfect combination.

The Ragnarok 2 can be ordered as “Just An Amp,” with two balanced (XLR) and three single-ended (RCA) inputs or it can be ordered “Fully Loaded.” The fully loaded configuration, includes a moving magnet phono stage and a USB DAC with each taking the slot of an existing RCA input.

The Ragnarok 2 can also be used as a pre-amplifier with external power amplifiers like the Schiit Vidar or Aegir — or within the context of system that includes powered or active loudspeakers.

The base model is offered at $1,499 USD while the fully loaded model runs $1,699.  Those who purchase the base model do have the option of upgrading it to the loaded for roughly $400 (parts, labor, and shipping).

Possibly the most interesting thing about the Ragnarok 2 is how it goes about its business. Unlike most designs, the Ragnarok 2 is really a single amplifier per channel with taps off to the balanced and single ended headphone jacks as well as to the binding posts for the loudspeakers.

The balanced tap pulls 24 watts per channel while the single ended pulls 6 watts (both rated at high gain and 100% volume). That is a very unusual amount of power for the headphone circuits and as you can imagine most of the time you won’t need 28dB of gain at full volume for headphones.

Instead, the Ragnarok 2 offers two lower gain modes at 18dB and 6dB that are more suitable for headphone use and the 25x (28dB) gain setting is best reserved for loudspeaker use; the aforementioned Magnepan LRS were run at that setting.

In addition to the three gain stages, the Ragnarok 2 also adds a 128-step volume control that is an improved version of the original and the same system used in their Freya Preamplifier lineup that is one of their best-selling products.

Rather than reinvent the wheel, Schiit borrowed it from other products in their lineup with the phono stage being based around the Mani and the DAC based around the multibit version of the Modi; that specific option is on hold right now due to supply chain issues.

Both have some subtle differences from the standalone products in order to work with voltages inside the Ragnarok and to fit the slots, but both sound very similar to the standalone versions when tested side-by-side.

When you consider that a Modi Multibit and Mani 2 would run you $270 on their own — the price of the fully loaded is a bargain.

I’ve always liked Schiit’s brushed aluminum finish and was glad to see the remote made of the same material as too many times I’ve seen a high end product with a plastic remote that just doesn’t do the product justice.

The remote can be used to control source, volume, gain, speaker/headphone selection, and mute. This mirrors the front panel controls with source control on the far left, followed by the headphone/speaker switch and LEDs.

The gain control is split by the volume knob with the button on the left and the LEDs to the right. The two 6.35mm and XLR headphone output jacks are on the far right side of the front faceplate.

There are no controls on the bottom or rear of the chassis which I particularly appreciate as too often other models have to taken off the rack to make changes to the settings.

Having owned the first generation Ragnarok, I had high expectations tempered somewhat by the fact that the base price had gone down by a few $100. I didn’t doubt that it would sound good but when the price drops by $100 during our current economic conditions — I wondered where they made cuts to the design.

I am happy to report that if anything did get cut in order to save costs, it didn’t impact the sonic performance or power output.

I used the speaker taps connected to both a set of JBL Arena bookshelf speakers as well as to the Klipsch Heresy II Loudspeakers in my den.

Having owned the original Ragnarok for a number of years, I remember rather well what it sounds like; I’m not sure that the differences between the two generations are enormous in that regard but I did think that the Ragnarok 2 delivered plenty of punch when called for but with good dynamics so quiet passages remained so.

I know that EIC Ian White disagrees with my assessment that the Ragnarok 2 is like a straight wire with gain; offering very little sound of its own. We’re both using rather transparent sounding loudspeakers so I doubt that we’re hearing the Ragnarok 2 on very different playing fields.

He finds the Ragnarok 2 to be slightly darker sounding and softer in the bass with his Magnepan LRS; he’s also comparing it to the $6,499 Cambridge Audio Edge A which is a lot more powerful than the Ragnarok 2 and far better at controlling the panels of the LRS with much less effort.

The Ragnarok 2 doesn’t have the transparency of the Edge A but he also conceded that the LRS sounds rather spectacular with the Schiit amplifier if you can deal with the volume limitations listening to rock, large orchestral pieces, and manage your expectations.

When using the Ragnarok 2 as a headphone amplifier, I found it equally well suited to IEMs on low gain and low volume where even the Andromeda was hiss free, and with power hungry planar magnetic headphones like the HiFiMAN HE6 and HE560 at the top end using mid-level gain and a good bit more of the volume knob.

The HE6 could be used on high gain, but left little usable volume range so it was best to use a bit more volume and a bit less gain to allow for more granular control.

With the new circuit design, it didn’t matter which output I used or what gain level I chose, the same rich tonality came shining through. The Ragnarok 1 was a very capable amp in this regard and I’m happy to report that the update has cost it nothing in that respect.

I am in total agreement with our EIC that the Ragnarok 2 has both an immediacy to its presentation and sense of swing that makes it work with a lot of music; vocals are particularly strong thanks to a high level of midrange resolution and punch.

The Schiit Audio Ragnarok was arguably the best product in Schiit’s line-up before the redesign and I remained convinced that it is one of the best still; Schiit doesn’t offer a streaming feature which has become more and more common and that aspect might deter some potential owners who will look at something like the Naim Uniti Atom or Cambridge EVO Series and think the benefits outweigh the additional costs.

One could add a very capable streamer from Cambridge Audio or Bluesound to the Schiit Audio Ragnarok 2 and have all of the same features and power with a far superior headphone experience compared to the Naim — but that involves more boxes and cables.

Would I buy the Schiit Audio Ragnarok 2 for myself? I already own some of the best headphone amplifiers currently available but I find the long-term possibilities with the amplifier connected to multiple sources and my rather extensive headphone collection rather appealing.

The Ragnarok 2 is quirky and very unique; Schiit has improved on the original enough to warrant a rather strong recommendation.

Are 3-Minute Songs Bad For Music? The Honest Broker Knows Why.