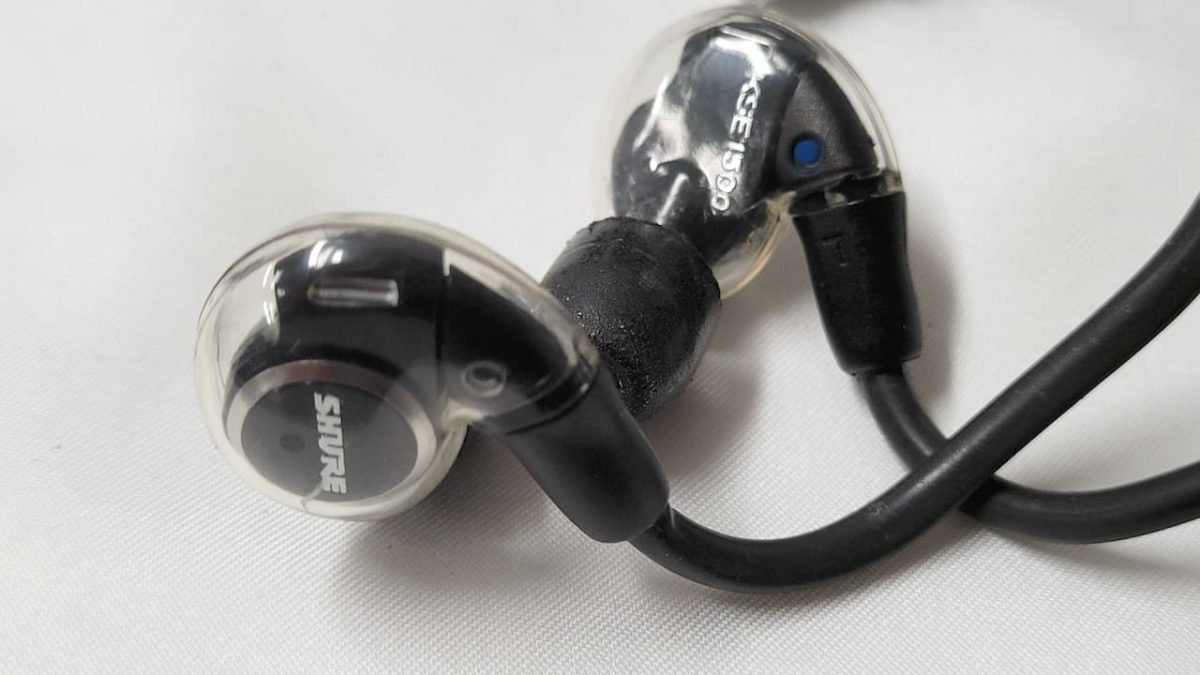 Shure is preparing to celebrate its 100th Anniversary in 2025 and that puts the company in rather elite company along with Denon, Luxman, and Yamaha. The brand may have vacated the phono cartridge category where it had some excellent products for many years, but it is pushing rather hard with its second generation products in the headphone and earphone verticals, including the SE846 Gen 2 Sound Isolating Earphones that we just reviewed and the very intriguing Shure KSE1200 Electrostatic Earphone System.

Their product lineup in 2022 includes headphones, earphones, stage monitoring systems, phone conferencing systems, microphones, mixers, and audio processors which are used by the pro audio and consumer segments all around the globe.

Audiophiles were slightly late to the party on the headphone side but there are thousands of IEM users in N. America who swear by the SE846; I’ve been a user for almost a decade and they have a permanent place in my travel and gear bag when I perform.

The SE846 represented the top of the Shure lineup for years until the release of the KSE1500 in 2016; the package included a set of electrostatic IEMs, DAC, energizer, and battery pack in a convenient portable package the size of a smartphone (2016 version) but with twice the thickness.

It was the pinnacle of Shure’s product lineup offering state-of-the-art performance with a rather high price tag. The $3,000 USD asking price made the KSE1500 one of the most expensive IEM systems on the market — and it was also one of the first electrostatic IEMs ever made for consumers.

The KSE1500 should not be confused with other hybrid models that use an electret driver which is not a true electrostatic design. The Shure KSE1500 are very similar in their operation to the STAX over-ear electrostatic headphones that require the energizer to operate.

Technology marches on and that created a dilemma for Shure; whilst the energizer and earphones kept pace with the market — the 24-bit/96kHz DAC started to really show its age and was no longer competitive with other products in the market. Users could bypass the DAC, but you still had to pay for it as part of the overall package and it was a big draw on the battery.

The KSE1200 retains basic components of the KSE1500 package but now ships without the DAC. They also made some modifications to the battery to extend the playback time. Problem solved? Maybe.

The updated price of $1,999 USD is still on the higher side and whilst it is a lot more affordable than the original KSE1500 and some other flagship models within the segment — it is still double the price of the Shure SE846 Gen2 IEMs and does it really deliver that much better of a sonic experience?

The Shure Energizer (not the bunny) has a unique shape to say the least; it resembles a flattened aluminum cylinder with a rather thick faceplate and rear panel. The front panel includes a large volume knob that doubles as the on/off switch, two LEDs, a 3.5mm input port, and the port for the earpiece cable.

There is a locking port that requires a sleeve be pulled to the rear to unlock the connector before it can be removed. The rear panel has a single micro-USB port for charging and a single switch marked PAD with 0dB and -10dB positions.

One side of the unit has two rubber bars that serve as feet when set on a desk or spacers when bundling the energizer with a DAP or phone. This allows air to flow over the main surfaces and helps prevent overheating.

The overall weight comes in at 6 ounces and while that might seem like something you don’t want to carry around attached to your Android or iPhone, it actually doesn’t feel that heavy when you carry it around.

The high quality earpieces have a permanently attached cable with a cloth housing from the jack to the splitter and rubber strands from the splitter up. There is a large chin slider to help hold the earpieces in place along with the ear hooks with memory wire.

The earpieces are similar in size and shape to the existing Shure SE Series models and utilize clear plastic so that the internal components are visible. We were somewhat confused by the KSE1500 markings on the earpieces — the energizer unit features a “KSE1200” branding which apparently indicates which model you are using.

The electrostatic drivers are the “soul” of these earphones — which might be a strange phrase to use because the technology is often praised for recreating the most accurate sound possible. Electrostatic panels or drivers offer a level of transparency that conventional drivers can’t achieve. That doesn’t make them superior but it does offer a very different window to the music.

Why are they more accurate sounding? How does the technology even work in the context of a pair of earphones?

The reason for this is an electrostatic headphone uses a charged diaphragm that sits between two grid electrodes. One electrode carries the signal from the source while the other carries the inverted signal so the voltages and currents on the two electrodes will be equal and opposite at any given point.

The charge on the diaphragm causes it to move toward or away from the electrodes in direct relation to the music (voltage and current provided by the source).

Needless to say, electrostatic designs are more complex and the price is a reflection of that; the materials and manufacturing process are not inexpensive.

It took roughly 8 years of development time for Shure to bring the original KSE1500 to market as they worked through the challenges of building a portable electrostatic IEM.

Electrostatic headphones do take up some space on the desktop because you require both an amplifier for the headphones, DAC, and sources. A portable electrostatic IEM is a very different kind of product and Shure deserves a lot of credit for their design creativity.

After fully charging the energizer overnight with a micro-USB charger and setting the pad switch to the -10dB position, I connected the energizer to the line out on my Astell&Kern KANN Alpha DAP and used that as my primary digital source.

The PAD switch attenuates the input signal from high output devices to prevent clipping; the A&K DAP certainly does present that challenge and I decided that it made prudent sense to start there. When I switched over to the Sony WM1A DAP, I was able to switch back to the 0dB position because its output is significantly lower.

Having listened to a number of electrostatic headphones over the past five years, I had very high expectations for the KSE1200. One aspect of the performance that I feel is accurate based on my personal experience is that these types of headphones don’t necessarily jump out at you right away; one needs to have some patience before passing judgement.

The more you listen — the more you appreciate what the KSE1200 earphones are capable of.

Looking back at my notes, the one thing that sticks out is the degree of accuracy that the KSE1200 are capable of. These IEMs will not reproduce bass with enough impact to rattle your teeth (why would anyone desire that?), or put too much emphasis in the midrange making vocals sound too forward and lacking in accuracy, and nor will they add too much energy in the treble in an attempt to open up the soundstage.

Bass notes have excellent definition, clarity, and speed but they won’t pound you over the head; listening to Miles Davis’ Bitches Brew, both Dave Holland and Harvey Brooks have the opportunity to shine with the acoustic and electric bass.

The KSE1200 makes it so easy to focus on each instrument and latch on to their playing and clearly hear each note; there is no blurring of the notes or bleed into the lower midrange. The detail and texture are almost mesmerizing on a good recording.

The midrange performance is superb, giving vocals all of the clarity, detail, resolution, and texture they require to sound accurate. Strangely enough, where the midrange really stood out for me was with rather complex and fast orchestral pieces that can be challenging for a lot of headphones and IEMs.

On pieces with a lot of inter-play between musicians, the KSE1200 did a wonderful job of clearly defining each musician in their proper place, and revealing every nuance that lesser IEMs can’t recreate. The tonal balance was extremely accurate and it made listening to the violin and piano a rather different experience because most IEMs can’t get the timbre correct — the Shure KSE1200 are superb in that regard.

The treble offers plenty of airiness, detail, and precision. Percussion snap is sharp and snare rattle well defined. Cymbals have a lot of energy and detail that never sounds hard making the top end rather clean with most recordings.

The overall soundstage performance is good; nothing is exaggerated but you will notice that the sound does move both outside and inside your head as musicians move around the stage. The stereo separation is excellent making albums such as The Who’s Quadrophenia sound more spacious than previously heard through any pair of IEMs.

The battery performance has also been improved from the KSE1500; we managed to achieve an average of 11 hours of playback time with each full recharge. The charging process is not very fast with the micro-USB plug and one should expect between 3-4 hours to fully recharge the energizer once it is fully drained.

When spending $2,000 on a pair of IEMs, it is more than reasonable to expect world-class performance. If you take a look at other electrostatic headphones or IEMs currently in the market from Audeze, Dan Clark Audio, and STAX — the Shure KSE1200 are seemingly rather affordable.

It takes a lot of engineering prowess to manufacture an electrostatic loudspeaker or pair of headphones/IEMs. Very few companies have done it well over the past 80 years.

If you are willing to spend the money, the Shure KSE1200 offer one of the most open sounding experiences you can find with IEMs; the accuracy, detail, transparency, and speed performance are world class in every respect.

Those who think having to carry around the energizer makes them more trouble than they can possibly be worth — are truly missing the point behind these.

Shure have designed an amplifier that can be attached to your smartphone or DAP and that took a lot of clever engineering to accomplish. The end result is one of the best sounding IEMs available at any price.