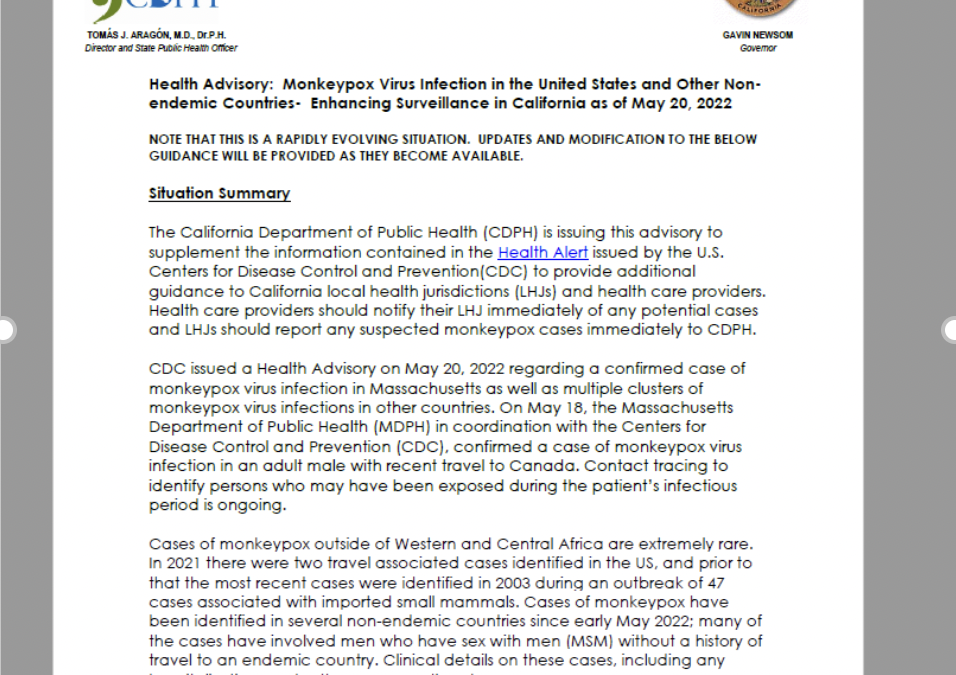 San Francisco and California state health officials knew monkeypox was spreading through gay or bisexual men who went to bathhouses and international festivals but hesitated to create a “stigma” by communicating these details and closing such venues, according to emails obtained by The Heritage Foundation’s Oversight Project.

Much of the internal communication between and among San Francisco city officials in early June focused on messaging for bathhouses, as well as “sex clubs” catering to gay and bisexual men.

Flyers about monkeypox needed to be “community centered, specifically in the lgbt [LGBT] areas,” one such email said.

However, another email shared among government communications officials across California warned: “The implicit headline I’m afraid of is “Health officers say gay men will spread monkeypox at Pride weekend.”

Monkeypox is a disease that causes sores and open lesions on the skin. A study published in The New England Journal of Medicine reported that 98% of those infected around the world were gay or bisexual men who were having sex with other men.

The Heritage Foundation’s Oversight Project obtained the documents through a request for public records. (The Daily Signal is Heritage’s news organization.)

An Advisory on Monkeypox

On May 20, the California Department of Public Health sent out a health advisory focused specifically on monkeypox. This advisory stated only that multiple clusters of monkeypox infections had been reported in other countries, with one case in Massachusetts.

Four days later, on May 24, the California Department of Public Health’s Office of AIDS sent out an advisory email to local health officials, including in San Francisco, stating that gay men were spreading monkeypox while attending saunas or bathhouses and international parties or festivals catering to homosexuals.

The message is addressed to the Office of AIDS’ “stakeholders” and reads in part:

You have probably seen reports in the national media about cases of monkeypox in the United States and other countries that have occurred primarily in men who have sex with men.

The California Department of Public Health has sent a health alert (see attached) with guidance for local health departments and health care providers.

We have learned that some of the initial people in the U.S. with confirmed or probable monkeypox have traveled to Canada or Europe. Monkeypox cases have also been reported in Canada and several European counties [sic], and some cases have been associated with attendance at saunas/bathhouses and international gay parties/festivals.

Unlike typical monkeypox infections, many cases have initially presented without preceding prodrome symptoms (e.g., fever, headache, muscle aches) and with lesions limited to the genital or perianal area that may be confused with a sexually transmitted infection. The attached documents provide more information about monkeypox lesions.

On May 27, the California Department of Public Health’s monkeypox health advisory for health care providers announced that the agency has confirmed one case of monkeypox. But the state’s messaging has changed, and includes no mention of how the disease spreads.

Even though the state health department’s Office of AIDS described how monkeypox was spreading, the agency didn’t mention those facts in its surveillance report. The Office of AIDS doesn’t say where the monkeypox cases occurred, nor does it mention that the disease spreads through commercial sex facilities such as bathhouses and saunas.

However, the advisory for healthcare providers does discuss the importance of not stigmatizing gay or bisexual men, who it refers to as MSM, meaning men who have sex with men.

“Providers should communicate relevant, non-stigmatizing and non-judgmental health information and advice when serving all patients but particularly patients who may already feel stigmatized by circulating misinformation such as MSM and African/Black populations,” this health advisory says.

On June 6, Jacqueline McCright, who oversees STD Prevention and Control Services at the San Francisco Department of Public Health, said in an email to colleague Alison Hawkes that sex clubs and commercial sex venues were cluster areas for spreading monkeypox. McCright also wrote that she was interested only in getting monkeypox messaging out to such sex clubs and commercial sex venues.

McCright referred to an official whose “role is to maintain strong relationships with various sectors/partners within the gay community.”

She said that official, Travis Tuohey, “helped get COVID messaging out to sex clubs and commercial sex venues during the height of [the] pandemic.”

McCright’s name came up again in an email from Laurel Arvanitidis, director of the San Francisco city government’s Office of Business Development.

Based on this message, San Francisco officials seemed to know some type of mitigation effort was needed against monkeypox, but they mention only messaging and not closing specific establishments and venues temporarily to reduce clustering of monkeypox cases in the city.

On June 6, Arvanitidis tells two other officials in an email:

I have a good list of Gyms from the pandemic. I could share those emails with you or forward something on your behalf.

[For] Clubs/Bars, we should work with the president of the [San Francisco] Entertainment Commission, Ben Bleiman. He also leads the Bar Owners Alliance and has the ability to spread info through his network.

We could also consider using the Entertainment Commission–either asking for some subset of their permit holders and/or information in their broader newsletter. They are doing a nightlife summit Tomorrow Afternoon. Not sure if you want to go that BIG but that is a well-attended/watched event.

I would defer to Jacque McCright on your team for bathhouses. She was always the one who had the pulse on that.

My staff has a contact for Eros if that would be helpful.

Let me think through saunas. I have some, but I doubt I have an exhaustive list.

Eros is a gay bathhouse, or sex club, that moved to the Tenderloin neighborhood of San Francisco.

The emails discuss the need for officials to create a flyer to put in these clubs.

Over and over, the emails mention the importance of getting out the messaging to commercial sex venues, gyms, raves, and sex party venues and determining who is the best point of government contact with these venues.

We need a flyer with messaging and language that will speak to and resonate with gay, bi- and other MSM [men who have sex with men], and that includes photos of the rash to look out for.

This flyer will need to be disseminated to CBOs [community-based organizations], sex clubs/bathhouses (including Steamworks) and other relevant venues.

Alison Hawkes, communications director for the San Francisco Department of Public Health, follows up that day in an email asking city government colleagues: “I’ve got a list of venue types I’m tracking for this based on targeted audiences of people at higher risk. Who is the  CHEP [Community Health Equity & Promotion] lead with whom I [can] coordinate?”

In an email to San Francisco health officials the next day, June 7, a CDC official focuses on the “design elements” for the public awareness campaign about monkeypox.

“Design of elements—The key issues is as you say [that] we don’t want it to look like covid [COVID-19] level concern with only one case or [to] look so intimidating that it creates an atmosphere of fear. We are hoping to strike a balance between ‘awareness,’ responsibility, and call to action,” CDC public health adviser Frank Strona tells the city health officials in the email.

“As these are community centered, specifically in the lgbt [LGBT] areas–we are leaning towards the design elements we have used traditionally out of CHEP/DPC [Disease Prevention and Control] for STD/HIV for the moment,” Strona writes. “Then if (when) we move towards more cases and increase response we can revert back to a more ‘alert’ version.”

On June 14, the California Department of Public Heath sent out a communications tool with no mention of commercial sex facilities. The messaging was: Anyone can get it.

Cohen, medical director of the San Francisco City Clinic, notes in a June 17 email to five state health officials and a CDC official about pending briefings: to the San Francisco Board of Supervisors:  “Several [California] cases reported sex at a bathhouse during isolation period” (and [I] can say verbally that global cases linked to raves/bathhouses etc). Let me know if ok to include this.”

On June 21, Hawkes, with the San Francisco Department of Public Health, sent an email to city colleagues about “more personal information” about individual monkeypox cases, which he says includes “gender identity, age range, travel status and the bathhouses.”

On June 22, Matthai Chakko, the city of Berkeley’s communications director, posted a message on the Bay Area Public Health Information Officers’ Google Groups application that was shared among other communications officials in the state, including San Francisco’s Hawkes.

Chakko’s warning: Be careful about messaging.

“The implicit headline I’m afraid of is ‘Health officers say gay men will spread monkeypox at Pride weekend,’” Chakko wrote. “I worry that feeds into sexual shame and stigma in a community that’s familiar with being treated that way by straight people.”

The text of Chakko’s post, with the subject line “RE: Monkeypox communications,” reads:

We will join. A few concerns for the group:

1. I think we have to be even more cautious with a joint health officer statement about a virus that’s “low risk” to the general public but highlights sexual behavior of men who have sex with men on the eve of pride weekend.

I would eliminate the vague generalities about festivities and events and be specific about the behaviors we are concerned about. (The implicit headline I’m afraid of is “Health Officers say gay men will spread monkeypox at Pride weekend.” I worry that feeds into sexual shame and stigma in a community that’s familiar with being treated that way by straight people. )

In the Bay Area, we have networks of straight people who have high levels of nonmonogamous sexual activity. There’s also fluidity between straight and gay networks. I think we should focus on the behaviors and I’ve suggested some edits that I think make that possible while alerting a group that there’s higher risk in their community at this time.

2. I’d elevate the clinical information about the behaviors we’re concerned with since we say that’s the most important thing.

3. I’d elevate awareness that a post-exposure vaccination is available.

Thank you everyone, especially SF [San Francisco], for leading this!

The California Department of Public Health (CDPH) continues to work with local health departments (LHDs) and California health care providers on the ongoing monkeypox situation impacting the United States and other countries not usually endemic for monkeypox. As of June 23, 2022, there are over 3,500 suspected or confirmed cases of monkeypox reported from 44 non-endemic countries in the current outbreak (beginning in May 2022).

In the United States, there have been 173 confirmed cases from 25 states, including 59 California residents. Reports from investigations in several countries and the U.S., including in California, suggest that person-to-person transmission through close contact is fueling spread and that clinical case presentations have not always been characteristic of classic monkeypox infections.

Only on June 24 did the California Department of Public Health explicitly say in another health care provider advisory that monkeypox may be spread through “close or intimate in-person contact with persons in a social network experiencing monkeypox infections; this includes MSM [men having sex with men] who meet partners through an online website, digital application (‘app’), or social event (e.g., a bar, bathhouse, or party).”

The High Cost of Getting High

‘Pro-Death Healthcare Has To Go’: Medical Experts Reveal Next Steps For Pro-Life Movement During 50th March For Life