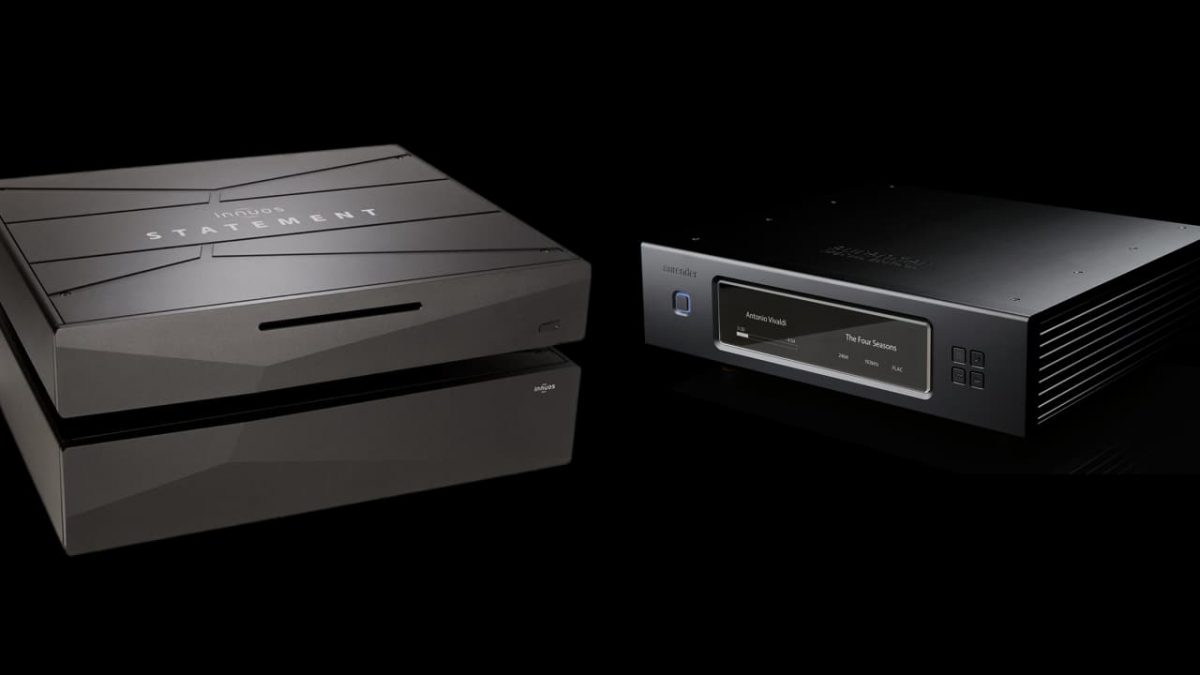 Sometimes it’s a single room at a show that really makes an impression; EIC Ian White still can’t stop talking about the DeVore Fidelity room by Common Wave HiFi and some of the feedback we’ve heard from attendees bolsters his claim that it was the runaway winner for “best sound that people can afford.” When you add everything up, it’s still an expensive investment but the speakers definitely lived up to the high praise.

What stood out the most were the two brands of network players and streamers that kept showing up in the best sounding rooms. Aurender and Innuos were seemingly everywhere in Long Beach.

We’ve included the Innuos ZenMini MK3 in our “Best Streamer” list twice in recent years and after Long Beach — it’s pretty obvious that the rest of the lineup probably belongs on that list as well.

Different models from both brands kept showing up on almost every rack; when I noticed the trend, I went back and started counting.

The Innuos Pulsar, Zen, ZenMini MK3, Zenith, and flagship Statement were all in use. The very expensive Statement was used in multiple rooms; including the excellent Boenicke W8 system that everyone seemed to love.

I counted 8 different Aurender streamers at the show over the weekend;

Differences in the models come down to bigger hard drives, CD-ripping, S/PDIF vs USB outputs, the number and type of network connections, and reclocking capabilities but all share some common ground too and it is that common ground that explains the popularity of these two companies streamers.

The feature that both Innuos and Aurender offer that grabbed my attention was the ability to stream tracks from different sources effortlessly and the ability to switch between those sources within a single playlist.

Both brands offer the ability to stream songs from a local hard disk, TIDAL, Qobuz, and other network devices and also to search all those devices through very strong interfaces. The Innuos streamers are Roon-Ready devices so you can use Roon if you want — but its interface is rather solid on its own.

I’ve mentioned it before that I find streaming services of somewhat limited value since I have a fairly extensive library of music on CDs and ripped to FLAC. As such, most of the time when I listen to streaming services, I’m looking for new music.

The NODE is excellent and our review highlights all of things it does really well.

Unlike the Innuos streamers, it can’t rip CDs to its internal hard drive. That capability is rather important to a lot of listeners.

A Scott Walker Audio representative was nice enough to spend some time talking me through the Aurender Conductor app and allowed me to hear tracks from three different sources; TIDAL, Qobuz, and local storage back to back to test its ability to switch almost seamlessly between platforms.

The longest delay between the last note in one track and first note of the next was about one second and had I not known in advance the tracks were coming from different sources, I couldn’t have told the difference by listening.

I did some of the same testing with an Innuos Statement thanks to Common Wave Hi-Fi, and again their Sense app proved up to the challenge with materials from alternate sources having little or no delay between tracks.

I found both systems to be very capable and with prices in the $10k to $25K range for the Innuos and Aurender being tested, they are expected to do well. I will concede that the sound quality from both brands is rather superb and I’ve been told by more than a few members of the eCoustics team that both connected to DACs in the $1,500 to $3,000 range are capable of very impressive performance.

What is now of interest to me is whether the power of those top models is needed in order to deliver that seamless performance or if the Zen Mini Mk3 from Innuos ($1,400 USD with 1TB HD) or an Aurender ACS100 ($3,500 with user added internal storage) are capable of performing equally well with a mix of tracks from various sources.

I know the smaller models will give up some of the high end feature set of the Statement and W20SE but if they can deliver the seamless integration between network, local, and streaming services at a more attainable price point, I suspect the entry level models have a much larger potential market out there.