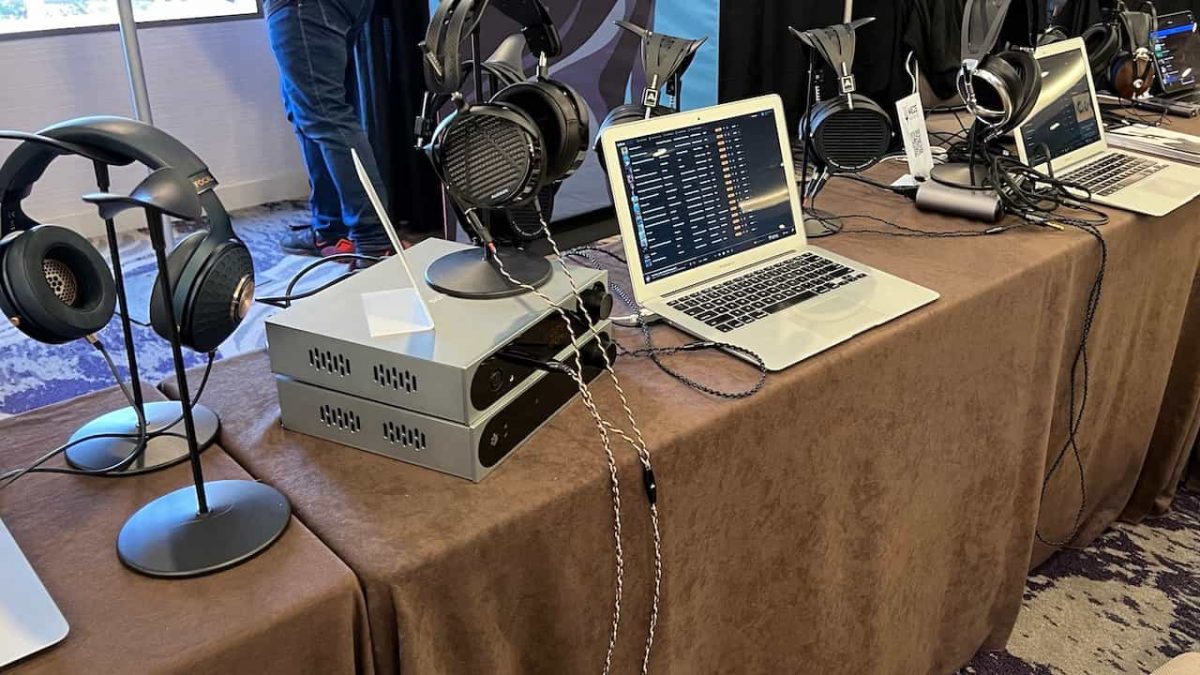 This was the inaugural year for T.H.E. Headphonium and we went for a smaller event because we wanted it to be intimate and accessible for everyone who attended. We also knew that CanJam Chicago was only five days later and that companies would not be able to commit to both events.

Beach Audio, Ampsandsound, Ultimate Ears, Awedyo Audio and AV Luxury Group were the core group of participants and we also had our own eCoustics listening area which featured dozens of Dongle DACs, headphones from Audeze, HiFiMAN, (we also brought our own headphones for attendees to try) headphone amplifiers from Schiit Audio, and Topping, and DAPs courtesy of Astell & Kern.

eCoustics Podcast Editor, Mitch Anderson, recorded a number of podcast interviews with vendors and members of our team; we will be publishing them over the course of the next few weeks.

EIC Ian White had a lot to say about the Boenicke W8 and DeVore Fidelity O/baby during his interview which can be found here.

Justin Weber, owner of Ampandsound, brought a number of his latest headphone amplifiers to give attendees the opportunity to try a wide range of Ampsandsound products and ran his demonstrations with the best DAPs from Astell & Kern and a wide range of headphones including a stunning planar model from Rosson Audio Design; Alex Rosson was the co-founder of Audeze and has created some incredible new headphones under his own label.

Beach Audio had a good mix of products from iFi, Focal, Meze, and Audeze available for attendees including the brand new Meze Audio Elite and Audeze LCD-5; users were able to compare the top models from three of the biggest headphone brands in the world and the booth was busy all 3 days.

Awedyo Audio had a mix of current models from Xduoo, Tin Audio, Tri Audio, KBear, Widing, Victory Melody and Dethonray for attendees to sample. Awedyo also had a booth in the marketplace and most of what could be sampled at their Headphonium booth was available for immediate purchase a few doors down the hall.

Ultimate Ears had their 3D modeling rig so they could do impressions at the show and they were quite busy throughout the entire weekend working with customers who were quite impressed with what they heard.

I own several pairs of UE IEMs and have zero hesitation recommending them; the build quality is superb and the sound quality of the UE Pro Series is some of the best in the category.

Lynn and I spent a lot of time preparing for the show and we’re very grateful to the brands that really stepped up and trusted us with so much equipment.

Apos Audio have been wonderful to work with and supplied the Caspian headphone along with the Topping D90/A90 DAC/Headphone Amplifier combination; this particular combination which is manufactured to the highest possible standards in China is particularly wonderful for those who enjoy listening to classical, jazz, and smaller ensemble pieces.

We have already reviewed the Apos Caspian and Topping D90; the A90 review will be published in July and it is a very worthy companion to the Topping D90 DAC.

If ordered as a set, APOS offers 10% off which makes the whole system a shade under $2000 by the time you add a set of XLR interconnects to complete the setup.

Apos also provided the Singxer SA-1 Balanced Amplifier that spent most of the weekend driving the new HifiMAN Edition XS and HE-R9 headphones. This is a powerful and very clean sounding amplifier that mates well with either the Singxer DAC or something like the Khadas Tone2 Pro DAC and Headphone amplifier that only retails for $249 USD.

This combination can be had for $1200 including the balanced RCA to XLR cables; Singxer makes some excellent equipment that flies under the radar.

Geshelli Labs was kind to send us a Erish2 & JNOG2 for use at T.H.E. Show and to be given away to a lucky attendee as well.

The configuration we received was all balanced with XLR interconnects and an XLR output jack but single ended versions are also available for those not running balanced setups.

The Geshelli equipment attracted attention not only for its sound quality but also for its paint scheme and colored faceplate options. We are awaiting both models for an upcoming review.

The Schiit Ragnarok 2 Integrated Amplifier is a stellar performer; not only does it offer excellent sound quality but it is super reliable and built like a tank. We ran a pair of the new HiFiMAN Arya Stealth Edition through it along with the excellent Khadas Tone2 Pro DAC; you can order the Ragnarok 2 with a DAC/MM Phono Preamplifier module but our version was the stock one.

The total system price is roughly $3,000 for this pairing and many who tried it were impressed with the performance and resolution of the system. I used an XDuoo X10Tii transport which raised the system price to $3,300 USD.

DAPs, Dongle DACs, and portable headphone amplifiers are huge parts of the portable audio category and we were honored to have one of the first samples of the Astell & Kern KANN MAX DAP with us Long Beach; our comprehensive review of it is coming next week.

DAPs have become more expensive and sophisticated and it is not unusual to see models above $2,000 at this point; Astell & Kern’s decision to keep the price of the KANN MAX at $1,299 USD was definitely a surprise. Not only does this unit compare rather favorably with models that are more expensive but its performance is a step up over the original Alpha DAP.

We noticed that Ampsandsound had a stack of them on their tables which is a rather significant endorsement from a company making some of the best desktop headphone amplifiers in the world right now.

Xduoo also provided a Link 2 Balanced Dongle DAC that offers physical controls for play/pause, next/back, and gain that was given away to a lucky attendee. For those looking for the ability to control the music directly from the dongle, the $149 Link 2 Balanced offers a great mix of features and price.

These two will drive about any headphone imaginable sporting over 700mW of output power. The build quality is great and we’re very grateful to them for their generosity.