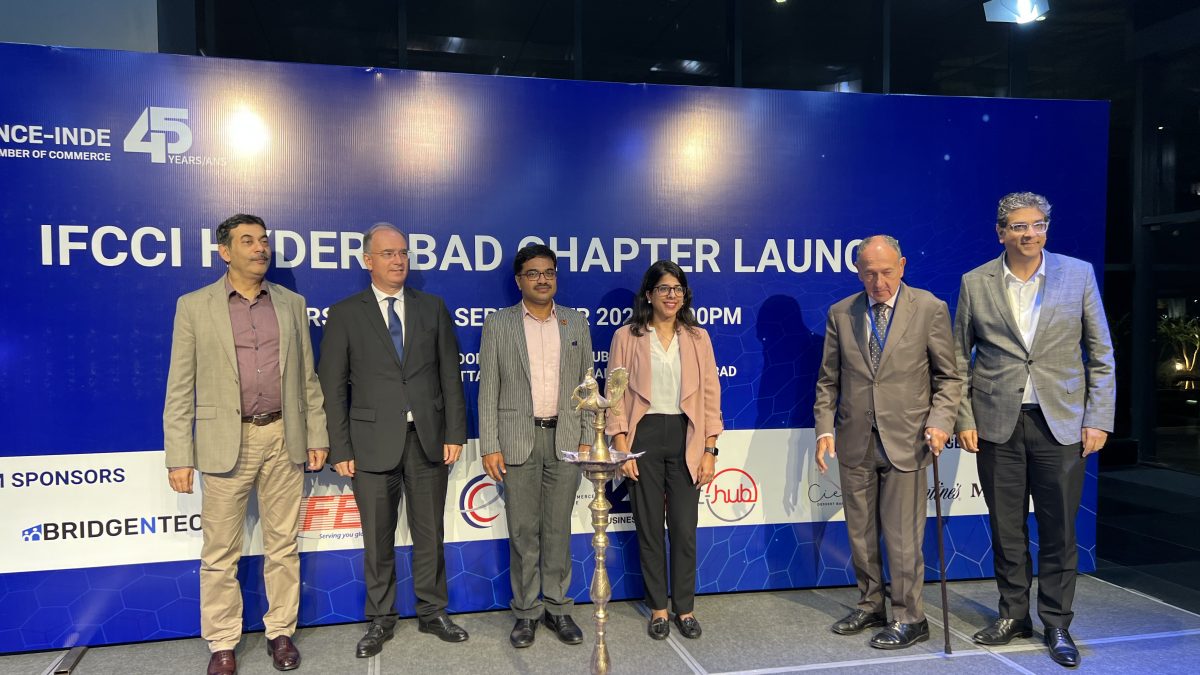 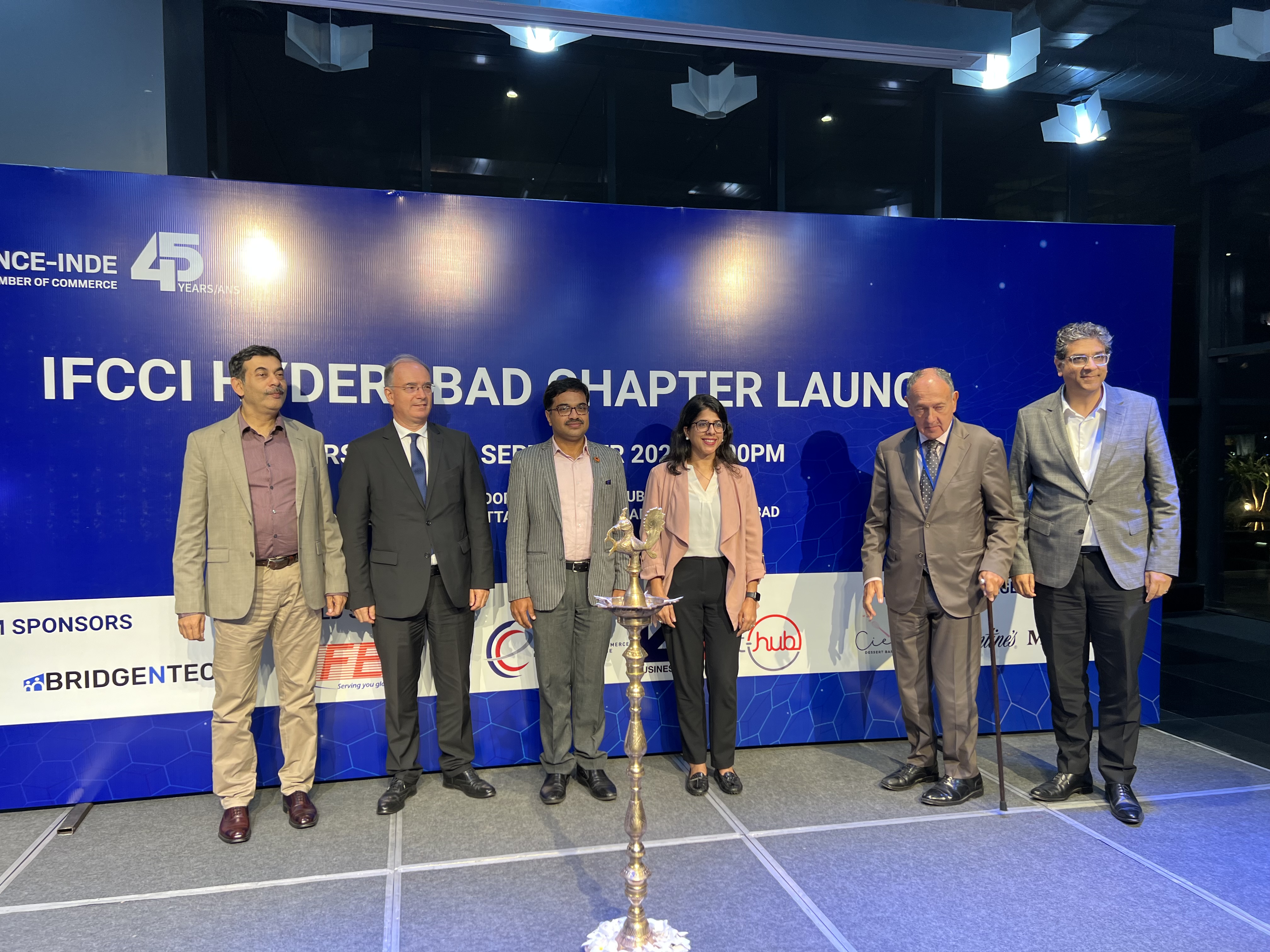 T-Hub, which leads entrepreneurs’ success with defined results through effective global collaborations, today signed a memorandum of understanding (MoU) with the Indo-French Chamber of Commerce & Industry (IFCCI) to reinforce the dialogue of innovation, growth and prosperity between India and France. The MoU was signed in the presence of KT Rama Rao, Hon’ble Minister of IT, I&C, MA and UD, Govt. of Telangana State; Jayesh Ranjan, Principal Secretary I&C and IT, Govt. of Telangana State; Sumeet Anand, President of IFCCI and Founder, Indsight Growth Advisors; H.E Emmanuel Lenain, Ambassador of France to India; Paul Hermelin, Special Representative of the French Government for Economic Relations with India and Chairman of the Board of Capgemini; MSR, CEO of T-Hub; and Panneerselvam Madanagopal, Chief Innovation Officer of T-Hub.

This one-year agreement will act as a gateway for Indian and France-based technology-driven startups to scale globally and strengthen the robust innovation ecosystem in both countries. T-Hub and IFCCI will collaborate on events and workshops to promote Indo-French partnerships in the technology and innovation sectors to bridge the gap between the French and Indian startup ecosystems.

IFCCI also launched its Hyderabad chapter at T-Hub’s new facility, the world’s largest innovation campus, in the presence of Thierry Berthelot, Consul General of France in Bengaluru; Payal S Kanwar, Director General of IFCCI; and Gerard Wolf, Chairman BRICS Access and Chairman of the Sustainability Task Force, MEDEF International (the most significant business confederation in France). T-Hub and IFCCI also hosted a French business delegation that was brought by MEDEF International, which included CXOs of French and Indian companies, state officials, diplomats, policymakers, the top players in the private sectors of France and India, multilateral organisations and renowned industry experts.

MSR, CEO of T-Hub, said, “The economic ties between India and France are on an upward trajectory. However, there is still untapped potential in terms of growth areas for both nations to advance economically. This is particularly true considering how quickly technology is evolving and changing both countries’ economies and societies. Our partnership with IFCCI aims to address these challenges and opportunities that will help boost the continued growth of India-France bilateral relations. It also presents a chance for our startups to connect with France’s innovation and startup ecosystem and gain access to peers and industry experts.”

Sumeet Anand, President of IFCCI and Founder, Indsight Growth Advisors, said, “IFCCI’s new chapter in Hyderabad is to support growing French investments in Hyderabad given the strong support of the Govt of Telangana. This is driven by 3+1 attractive reasons: a market with scale, talent for India and the world, supply chain in increasing products and now sustainable solutions for the planet!”

Payal S Kanwar, Director General of IFCCI, said, “We are delighted to see the growing French presence in Hyderabad across sectors like defence and aerospace, energy, technology, food processing, etc. Today’s inauguration is an important step in promoting this city’s strong potential and building a strong Indo-French ecosystem.”

Panneerselvam Madanagopal, Chief Innovation Officer of T-Hub said, “The shared goal of T-Hub and IFCCI is to create technologically advanced and globally aspirational ecosystems. By signing this MOU, we will give entrepreneurs and corporates from both the countries a platform and the opportunity to network and grow together.”

This launch follows the earlier successfully conducted 4th fourth edition of the Indo-French Investment Conclave in 2021, focusing on attracting French investments and boosting trade between France and India.

France and India have a long-standing strategic partnership. France is the ninth-largest foreign investor in India, where it has more than 1,000 establishments and employs more than 350,000 people. France is also India’s significant source of FDI(Foreign Direct Investment). Also present are 39 of the 40 CAC (French Stock Market Index) companies.

India’s economy is one of the fastest growing in the world, and it continues to be a land of opportunity. Telangana’s GSDP (Gross State Domestic Product) in 2020–21 was recorded at INR 9.78 lakh crores, denoting a growth rate of (+) 1.35 per cent compared to the previous year at current prices, higher than the national average, as noted in the Annual Report 20–21 of Invest Telangana. This was despite the COVID-19 outbreak in India and the strict lockdowns enforced, which heavily impacted the industries. Hyderabad has remained one of the best cities in the nation to live and work in, while the State, which makes up a sizeable portion of the Indian economy, has experienced spectacular economic growth for decades.

With this important chapter launch, IFCCI intends to promote existing French investments in the state and help them network with other companies within its extensive network.

The chapter launch of IFCCI is supported by the French Embassy in India, the Government of Telangana, CCEF – French Foreign Trade Advisors and Business France.

IFCCI is India’s most active bilateral chamber, with more than 650 Indian and French member companies spread across India and France. www.ifcci.org.in

T-Hub (Technology Hub) is an innovation hub and ecosystem enabler. Based in Hyderabad, India, T-Hub leads India’s pioneering innovation ecosystem and is the world’s largest innovation campus. Over six years, T-Hub has pivoted around the 6Ms (Mentorship, Money, Market Access, Motivation, Mindset, Manpower) and 2Ps (Partnerships and Policy advisory) framework with a mission of driving results and collaboration for entrepreneurs’ success. It has delivered 100+ innovation programs so far, creating an impact for startups, corporations and other innovation ecosystem stakeholders. Since inception, it has provided over 2000 national and international startups with access to better technology, talent, mentors, customers, corporates, investors and government agencies.