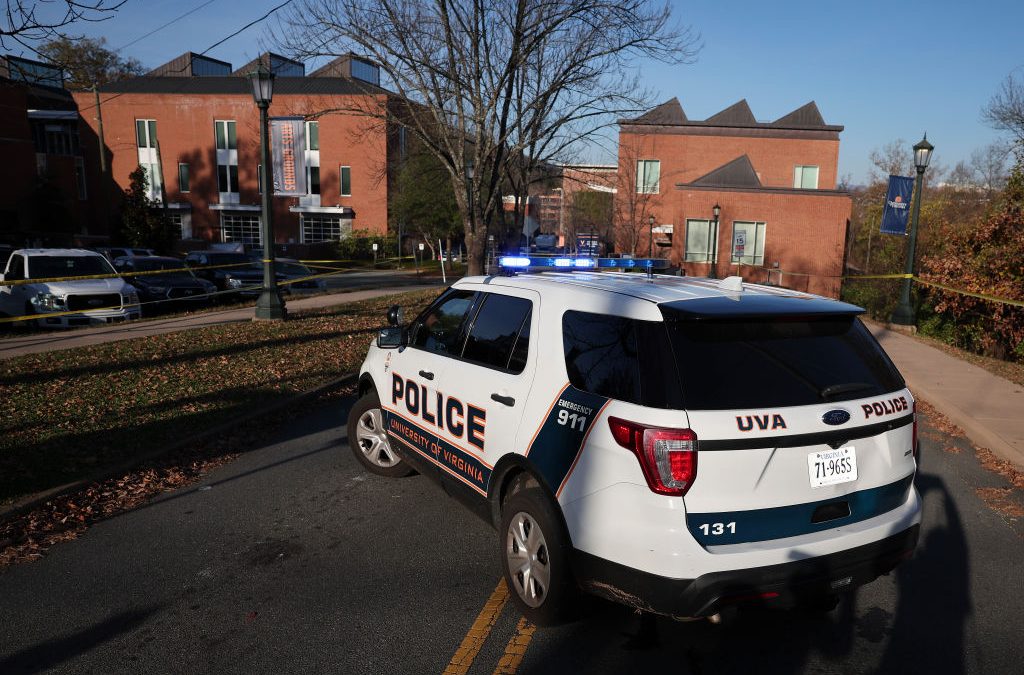 Three Dead, Two Injured After Shooting At University Of Virginia

Classes were canceled on Monday after three people were shot and killed and another two injured at the University of Virginia, where a gunman – suspected to be a former football player for the school – opened fire late Sunday evening.

Authorities are currently on a manhunt for Christopher Darnell Jones, Jr., a UVA student who President Jim Ryan had identified as a suspect in the fatal on-campus shooting, according to the local NBC affiliate.

The incident reportedly occurred on Culbreth Road around 10:30 p.m. Sunday.

Jones was last seen wearing a red jacket, red shoes and blue jeans. He remains on the run and is considered armed and dangerous.

A shelter in place was ordered on UVA grounds as police continued to search for Jones. As of Monday morning, the identities of the victims have not been released.

The UVA Police Department is looking for Christopher Darnell Jones regarding the shooting incident that occurred on the grounds of the University of Virginia. Call 911 if seen, do not approach. pic.twitter.com/mKcxF6ksxw

“We are working closely with the families of the victims, and we will share additional details as soon as we are able,” Ryan said in a statement sent early Monday morning.

Ryan went on to say the multiple law enforcement agencies are involved in the search for Jones.

“We will keep our community apprised of developments as the situation evolves,” Ryan said.

Christopher Darnell Jones Jr: What We Know About The Suspected Gunman So Far

What we do know about the shooter is that he is currently enrolled as a student at UVA, where he was a member of the football team back in 2018, according to WRIC.

Christopher Darnell Jones Jr., a former UVA football player and a current student, is suspected in a shooting that left three dead and two injured on the campus of UVA. He is considered armed and dangerous. pic.twitter.com/QsyGM7NMbp

The 5-foot-9-inch, 195-pound man is from Petersburg, where he played linebacker and running back at Petersburg High School for his senior year.

In high school, Jones was a two-time “Student of the Year” award winner, and earned honorable mention all-conference as a freshman and second-team accolades in his sophomore and junior years, the outlet reports.

The university president also added that he was “devastated that this violence has visited” UVM.

“This is a message any leader hopes never to have to send, and I am devastated that this violence has visited the University of Virginia,” Ryan said.

This is a developing story. Check back in with The Shade Room for more updates as they come.