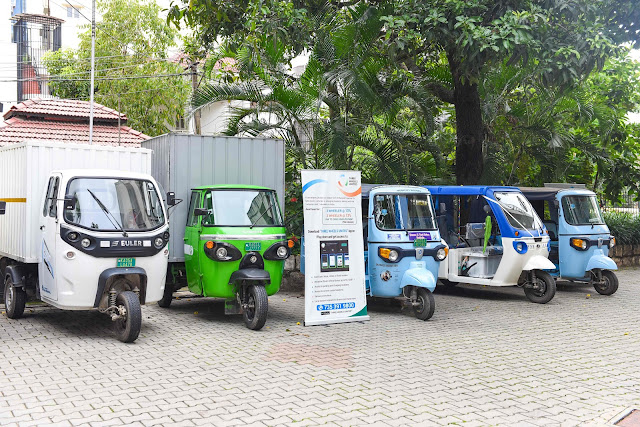 Over the next six months, Three Wheels United plans to finance 1000+ electric two and three wheelers in Kerala

Three Wheels United (TWU), a global fintech company for EV financing, has started operations in Kerala. TWU has flagged off its services in Kochi, Calicut, Thrissur, Trivandrum and Malappuram. Over the next six months, the company will finance 1000+ two and three-wheelers in Kerala.

Three Wheels United provides affordable financing solutions for drivers to easily make the switch from conventional vehicles to EV two and three-wheelers. Founded by Cedrick Tandong, Kevin Wervenbos, and Apurv Mehra in 2017, the company has been steadfastly working towards removing financial barriers in the adoption of EVs in India and now globally.

In 2019, Kerala’s Electric vehicle policy set an ambitious target of introducing 1 million EVs by 2022. Since then, several EV initiatives have been implemented in the state to drive the mass adoption of EVs. During the 2022 financial budget, the state government announced an incentive of Rs 25,000/- to Rs 30,000/- for every EV vehicle in the rollout of 10,000 e-autos in select cities. Furthermore, other initiatives to improve charging infrastructure and enable easy access to finance have also been introduced to effectively implement the state’s e-vehicle policy.

Cedrick Tandong, CEO and Co-Founder, Three Wheels United, said, “The adoption of Electric Vehicles has seen a steady increase in Kerala and the demand for EVs has significantly increased over the years. We believe that access to affordable financing can further contribute to the mass adoption of EVs in the state. After an overwhelming response in Karnataka and Delhi NCR, we are excited to launch operations in a key strategic market like Kerala. We look forward to supporting micro entrepreneurs to switch to cleaner and more economically viable last-mile alternatives”

Three Wheels United has developed a disruptive platform to finance light electric vehicles. The company leverages technology to provide the most comprehensive, affordable loans, and rent-to-own options to India’s micro entrepreneurs to help them easily switch to EV two and three-wheelers. TWU employs behaviour-informed proprietary technology to increase the accuracy of credit risk assessment and loan repayment rates, expanding access to financial products to populations that would be otherwise excluded from vehicle financing. Because of its platform, micro entrepreneurs can get a fair interest rate and loans covering up to 100% of the cost of the vehicle without any collateral. Unlike traditional banks that collect EMIs at the end of the month in a big chunk, the platform incentivises money collection on a daily/weekly basis in small amounts. In doing so, TWU is able to tap into the finances of the drivers when the drivers actually make money and in a way that is aligned with the lifestyle of the drivers.

Three Wheels United has over 50,000 drivers on its platform, offering them various products and services. The company has financed over 4000 auto-rickshaws resulting in the reduction of 1,72,000+ tonnes of CO2 emissions, and the generation of an extra $71M in income for the drivers.

Very recently, TWU raised $10 Million as a part of Series A Funding led by Delta Corp Holdings with participation from new and existing investors. With the new investment, Three Wheels United is in the process of scaling up two-wheeler and three-wheeler financing in India by partnering with the Government and other industry players. TWU has also started pilots in the Middle East, Africa, and other emerging markets with a goal to improve driver livelihoods and reduce air pollution globally.

More Information About the Jasminer X4 1U Ethash-Etchash ASIC Miner

Venture Catalysts ++, The House of Unicorns, Soonicorns Delivers 54 Startups Above $50 Mn in 7 years