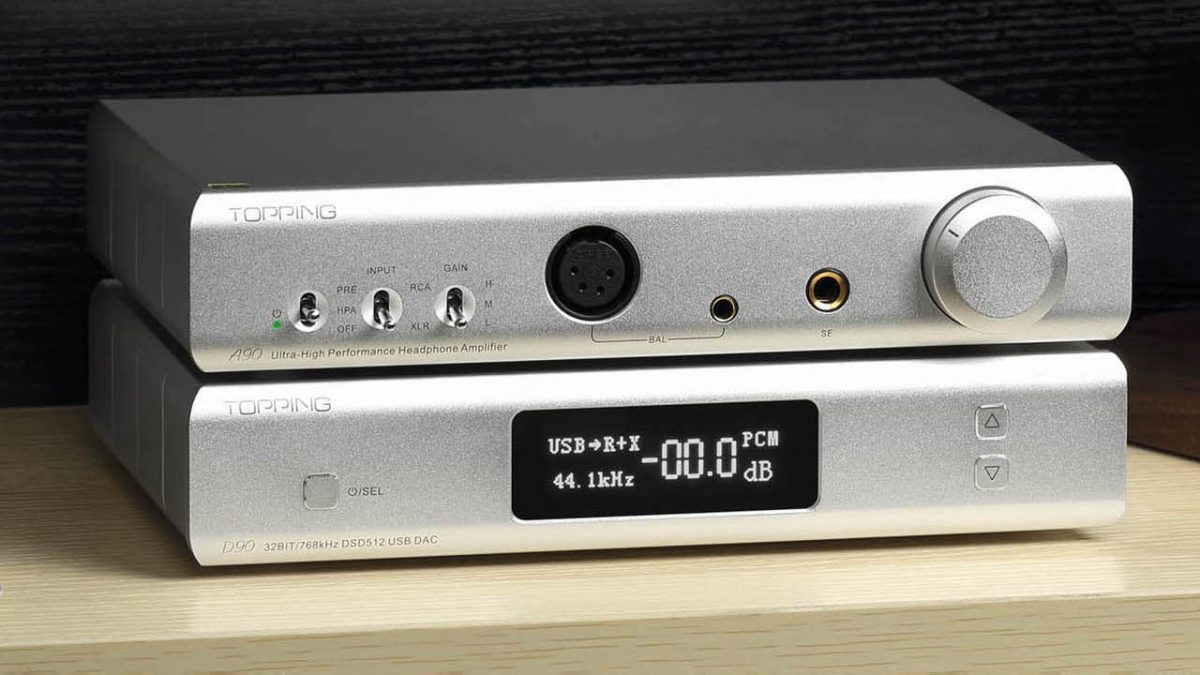 I’ve covered the Topping D90SE rather extensively and it remains one of my favorite affordable DACs in the category; it is very well engineered and sounds excellent. The Topping A90 has managed to slip through my fingers until now. It uses the same chassis as the D90 and works well with it — but it deserves to be considered outside of the Topping ecosystem.

Topping is a Chinese Audio manufacturer that produces a wide line of DACs and amplifiers ranging from the $100 USD price point up to the D90/A90 pairing which runs more like $1400. Topping has been a darling of ASR as their products test exceedingly well and as such the D90/A90 combo (pictured above) has gotten a lot of attention and been a good seller for Apos Audio that loaned me the combination for use at T.H.E. Show. Topping didn’t design the circuit used in the A90 which is a nested feedback composite amplifier design, but they have gone a long way to perfect it.

The A90 uses an all-aluminum chassis available either in brushed raw finish or anodized flat black.   It stands just under two inches tall, and nine inches wide and is roughly 6 inches deep. The same chassis shared by the D90 and U90 models as well so it stacks neatly for use on small desktops. If you aren’t familiar with the U90, it is the USB interface model and an excellent USB to Coaxial or Optical converter.

The front face has a series of 3 switches at left, headphone ports (XLR and 4.4mm balanced and 6.35mm single-ended) at center and the volume knob to the far right.   The first switch acts as the power switch and puts the A90 in either pre-amp mode or Headphone amplifier mode depending on position. The second switch selects either XLR or RCA inputs, while the third controls the gain level of the amplifier.  All the needed controls are easily accessible via the front panel which is always a plus. There is not a remote control provided which would be a nice addition for later models especially if used as a pre-amp.

The rear face has two pairs of XLR jacks and 2 pairs of RCAs, one each for input and outputs. Remember input jack is selected on the front panel so both sources can be connected at all times, so effectively the A90 can operate as a small pre-amp for two source devices.

As mentioned above the A90 uses a nested-feedback design.  This means the A90 uses cascaded op-amps in conjunction with negative feedback loops that help control each op-amp. The way this works is an op-amp is placed at the output of the previous op-amp in the series and a negative feedback loop adjusts the output of each op-amp into the next. The outcome is an amp with a higher gain, faster slew rate, and lower distortion than an amp using the same op-amps in parallel.   There are some hurdles that must be accounted for when working with a composite design, chief among them being a much higher output resistance than other designs. Topping has handled this problem well as output impedance is quite low. Another issue is that gain is usually lower in negative-feedback designs but here again, with nearly 8 Watts of output power (balanced in, balanced out) the A90 is at no loss for power either. Topping went so far as to challenge THX and their marketing campaign and the A90 does indeed measure at least as well as most THX implementations and beat many of them in tests by Topping, ASR, Soundguys, and others.

As a preamplifier it can output up to 18 V on the low gain and up to 49 V on the mid and high gain settings so is capable of not only driving just about any headphone imaginable, but also works well with about any powered monitor one can think of and has more than enough power for most (even on low gain).

A look at the spec sheet on the A90 tells you that Topping wasn’t shooting to make a good budget amp. They were shooting to make a fantastic amplifier regardless of price and the numbers suggest they succeeded.  But numbers are not everything and unless it sounds good, numbers aren’t anything.

The first thing I noticed with the A90 is that it effortlessly handled every headphone I plugged into it. From in-ears to the He6, it never sounded stressed, instead it just took what you gave it in stride and with the gain switch in proper position, it went from being quiet enough to use the Andromeda to powerful enough to damage your hearing with an He6 while offering a setting somewhere in between for about any headphone you are likely to encounter.

One test that almost always shows noise is to pause your music, and turn the volume knob all the way up and listen for hum or hiss.  The Andromeda is known for having some hiss with most desktop amp setups so I set the A90 on low gain and started listening with volume at about the 9:30 position on the dial, no hiss so far. Up the volume to 11 o’clock and its loud enough that this will have to be brief, still no hiss. Pause the track and cut volume knob all the way up, still no hiss, maybe my hearing is going bad? I tried the test again on medium and high gain with the same results. The A90 has a huge SNR and try as I might I could not get the Andromeda to misbehave.

The flip side is that when amps have a dead quiet noise floor, they tend to also lack top end power. That is why things like the Pass HPA-1 sell as well as they do, they somehow manage to combine both features and honestly that has been the price bracket you had to shop in to get both, until now. The A90 had no trouble offering up more than enough power to run the He6 and Hedd models that are notoriously power hungry regardless of input or output used. The single ended output is capable of 3 Watts into 32Ω and the balanced output a whopping 7.6 Watts with that same load.

This combination of vanishing noise and superb power give the A90 a lot of dynamic range to work with and it shows when listening. Quiet passages can be nearly silent and crescendos are thunderous. I struggled with the word there as booming implies loose and that simply isn’t the case, the A90 delivers a very transparent sound with little or no coloration and no sag at all from repeated big impacts that sometimes weigh down an amp. Like I said at the outset, the A90 makes music playback seem easy as it handled everything I could throw at it effortlessly regardless of what the source or headphone attached was.

This is the first sub-$1000 amplifier I would consider as direct competition to amplifiers like the Pass HPA-1 and Benchmark HPA4. It really does an awful lot well and left me looking at the Pass and wondering if it might be time to sell it and invest the money in the LCD-5.

The Topping A90 is one helluva headphone amplifier for the spend and should rightfully be worrisome to THX, Pass, Benchmark, and other manufacturers who are charging a lot more for lesser amplifiers. Sure the prestige brands will continue to get those customers for whom the name is as important as the sound, but just as savvy car buyers know that a Z06 Corvette is a better investment than the Lamborghini Aventador in terms of pure performance, the A90 is the better amp, and much like the car comparison, the A90 is likely to need less upkeep too.

The A90 often gets overlooked as we review the D90/A90 combo and gush over how spectacular the D90 is, but the fact is the A90 may actually be the better product of the two. If Topping would add a remote to the package it would be darn near perfect.

A huge thank you to Apos Audio for letting us borrow the Topping A90/D90 combo and a set of their Caspian headphones for the weekend.  If you haven’t had a chance to try this combination yet, I highly recommend it and be sure to take a listen to Vivaldi’s Concerto for 2 Cellos in G minor to really hear what the combination is capable of.

To purchase a Topping A90, or D90/A90 ensemble, we encourage you to visit our friends at Apos Audio.

How Was That Not A Hit? Olivia Newton-John