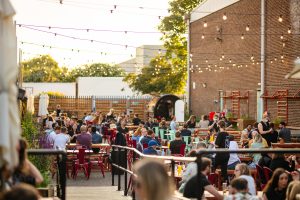 From Thursday 15 September, Truman’s Beer will be known as Big Penny, following the acquisition of the trademark by the management team at the Old Truman Brewery announced earlier this year.

Since launch in July 2020, Big Penny Social has welcomed over 400k guests, sold 300k pints of beer a year and showcased over 700 different beers from over 120 of the best independent breweries in the UK and further afield. Three bars have been upgraded to feature 82 beer taps and Big Penny Lager will pour fresh from four large beer tanks. The menu focuses on seasonal and local producers, headlined by a rotating selection of beers, sourdough pizzas and Sunday roasts. Everyone is catered for with alcohol-free and gluten-free beer on tap, a huge selection of vegetarian and vegan options, and plenty of choices for kids. A busy programme of entertainment and events create a buzzing atmosphere and ensures there’s fun for all, from live sports to family discos, craft markets to comedy. Not forgetting pool and ping pong tables available to play free of charge throughout the week.

Brick Lane Brews, a café bar in the Departures lounge at London City Airport, will become Big Penny Brews and is now back to 2019 trading levels. It serves the Big Penny beer range and is famous for its salt beef bagels.

The third venue in the group, The Newman Arms in Fitzrovia, London, will not be renamed given its rich history and iconic status as a beautiful traditional London pub.

The brewery in Hackney Wick was closed in June 2022 but the award-winning recipes are now brewed under contract for the three venues and online sales.

To celebrate, they are throwing a Big Penny Launch Party on Thursday 15 September from 6pm. The party is free to attend and open to everybody to join in the fun. On the night of the party there will be live music, comedy, circus acts, DJs, and 50% off their brand-new food menu. It will be a one-night showcase of some of the great experiences Big Penny will create throughout the year.

Michael-George Hemus, founder at Big Penny says: “This enormous building was meant to become our new brewery but the effect of the pandemic meant we had to sell the Truman’s name to survive and keep everyone employed. Whilst we couldn’t build the brewery, we could see a growing desire amongst people for places to come together, enjoy a great time and connect with their loved ones and the local community. So we changed plans and created a special venue which is a modern version of a pub, arts centre and town square wrapped into one. We’re delighted with how it’s turned out so far and now we look forward to welcoming hundreds of people from the local community and trade to celebrate the launch of Big Penny with us on the 15th September. Please feel free to join in the fun! Now the rebrand is completed, we will continue in our aim to further improve and develop our retail estate, in line with our vision to create special community-focused venues which bring people together to enjoy elevated experiences. We will look at adding another venue in the next 12-24 months.“

The Big Penny name draws from the heritage of the local area, where in the 1800s a nearby copper mill would mint penny tokens to be distributed across the country and close-knit communities would run charity fundraisers called ‘Penny Socials’.

Central Co-op opens its first store on the Wirral