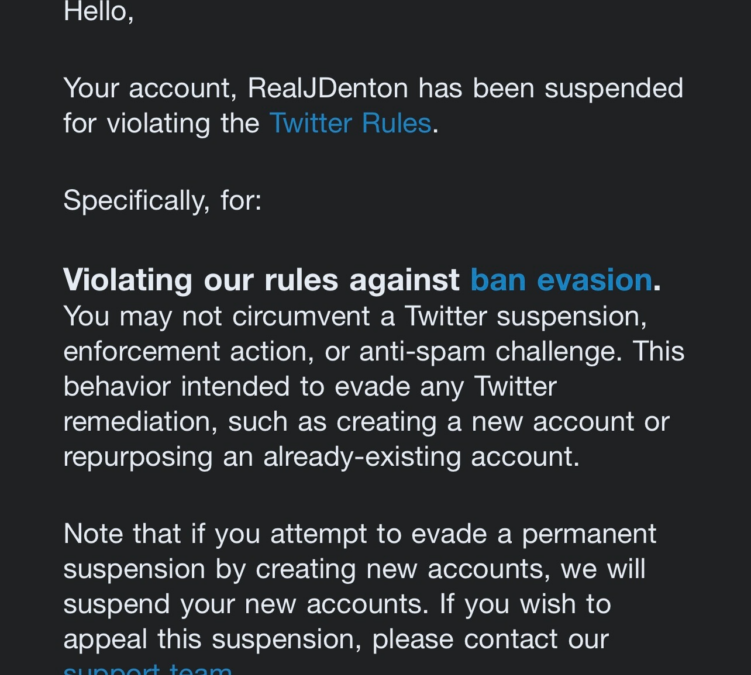 Twitter suspended conservative accounts just over one week before the midterm elections, including the account of a Heritage Foundation scholar and the leader of a conservative nonprofit.

Jake Denton, a research associate at Heritage’s Tech Policy Center, found himself suspended on Twitter at 11:10 p.m. on Saturday, Oct. 29, ten days before the 2022 midterm elections.

“Since the election of Donald Trump, Twitter has aggressively targeted and deplatformed young conservatives,” Denton told The Daily Signal on Monday. “It is no coincidence that just a week from Election Day, the leftists at Twitter executed one of the largest conservative ban-waves in the history of the platform.” (The Daily Signal is the media outlet of The Heritage Foundation.)

“In the middle of the night, Twitter removed conservative political activists and ordinary Americans across the country to further silence conservative voices,” Denton added. “Twitter’s targeting of conservative users this close to Election Day is a deliberate political action. Mass bannings have become standard practice against conservatives on Twitter, and Elon Musk needs to immediately put an end to this.”

“Note that if you attempt to evade a permanent suspension by creating new accounts, we will suspend your new accounts,” Twitter added.

Denton told The Daily Signal that he had not been banned before and that he appealed the suspension decision. He has yet to hear from Twitter since.

Vince Dao, editor-in-chief at the conservative organization American Virtue, also saw his account suspended. He told The Daily Signal that he received an email notification at 10:36 a.m. on Friday.

He described American Virtue as “an America-First conservative nonprofit that uses digital media and in-person events to spread the values of the authentic conservative movement.”

Elon Musk’s purchase of Twitter became final Friday, and the new boss already fired several Twitter executives, including the woman who was reportedly responsible for the permanent ban on President Donald Trump.

In a message to advertisers last week, Musk laid out his philosophy for Twitter.

“It is important to the future of civilization to have a common digital town square, where a wide range of beliefs can be debated in a healthy manner, without resorting to violence,” Musk shared in a statement on Twitter on Thursday morning.

Conservatives have long raised the alarm about Big Tech bias, particularly at Twitter, which has an official policy against “misgendering” and “dead-naming” people who publicly identify as transgender. Facebook and Twitter infamously suppressed a New York Post story about Hunter Biden’s laptop before the 2020 election. Then-Twitter CEO Jack Dorsey later admitted that it was a “total mistake,” but a Media Research Center poll suggested that the suppression of the story may have made the difference in Joe Biden’s victory.

The Supreme Court will hear Gonzalez v. Google, a case focusing on Google’s algorithmic recommendations. Both Florida and Texas have signaled that they want the court to review their laws aimed at stopping social media censorship as a violation of the First Amendment.

This is a breaking story and may be updated.

The post Twitter Bans Conservatives, Including Heritage Foundation Expert, One Week Before Midterm Elections appeared first on The Daily Signal.

In 5 Charts, How Heritage’s Budget Blueprint Would Clean Up Washington’s Mess

‘They Want War’: Tucker Carlson Accuses The Biden Admin Of Moving US Toward Nuclear Conflict