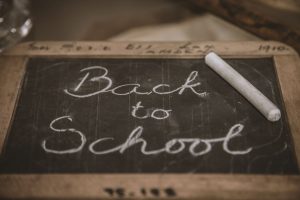 Over four million UK households say they are more likely to seek out second-hand school gear this year, as the cost-of-living crisis sees new school items sky-rocket in price.

According to a new report, two thirds (62%) of Mums and Dads say they are worried about how they will afford the costs that come with the new school year and many will be seeking out pre-loved items from charities or free-sharing platforms.

A third of parents (31%) said they already use pre-owned platforms to find back-to-school items for their children, and over half (57%) said they are now much more likely to give away their unwanted items on free-sharing platforms in a bid to help out others.

However – despite the good intentions of many parents – the data, which was commissioned by the UK’s number one free-sharing app OLIO, also revealed that parents are still throwing away an average of 13 school items each year, despite them being perfectly useable.

Tessa Clarke, co-founder and CEO of OLIO, is asking parents to think twice when they do their back-to-school clear-out and consider how they can help others by sharing their spare: “We know that everyone is feeling the pinch and understandably many parents are worried about funding the costly back-to-school period. But when you think about the amount of perfectly good items that are being thrown away and replaced each year, it just doesn’t make sense. If more people shared their spare items with others, we could avoid so much unnecessary spending and waste.”

The cost of the new school year is anticipated to set families back almost £300 per child this year, yet parents admit they could probably save at least £205 of that by seeking out second-hand items instead of buying brand new.

And it would seem that the current economic climate is encouraging more parents to think about how they can support others in their local community. Two in five parents (40%) say they will be giving away their unwanted school items, so others don’t have to spend a fortune. However, demand is currently far outstripping supply.

Tessa Clarke adds: “This back-to-school season, we are on a mission to get more people giving away instead of throwing away, and are calling on parents to share their unwanted kids’ items on the OLIO platform so they can reduce unnecessary waste and help others in their community. Starting today, we’re aiming to get 30,000 kids items listed over the next 30 days – and we need your help to get there.”

Spending slows in September due to cost-of-living concerns, yet ‘insperiences’ receive a boost as Brits spend more time at home

Delivery disruption is en route: how can retailers prepare?