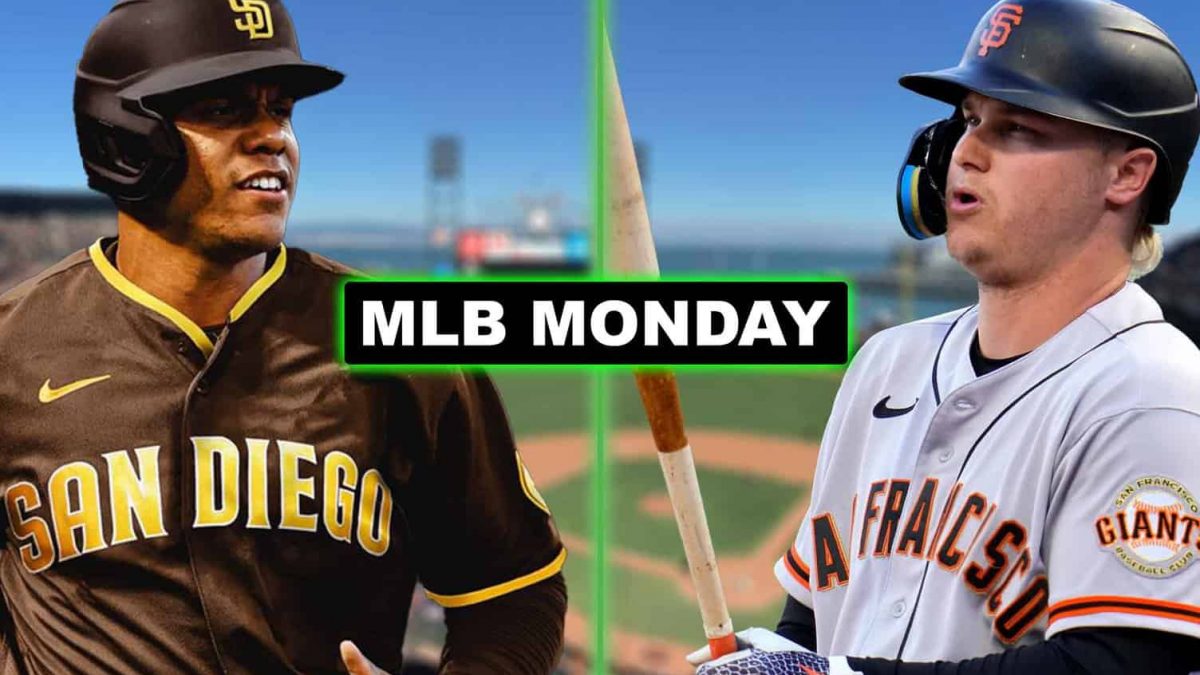 Hot
Buffalo Bills released rookie 6th Rd pick P Matt Araiza after he allegedly gang-bang raped a 17-year-old last year when he was 21 years old at San Diego State
Hot
NBA released the top 50 clutch plays from the 2021-22 season to capp of “Clutch week” with Devonte’ Graham’s full court buzzer-beater taking the top spot
Hot
Seattle Mariners signed AL Rookie of the Year favorite OF Julio Rodriguez to an 8y/$120M contract extension through 2029 that includes player & team options with max value = 18y/$470M based on MVP finishes with J-Rod having a 5y/$90M player option after 2029 if Seattle declines team option, giving him 13y/$210M guaranteed in this record-breaking deal
Hot
Los Angeles Dodgers OF Mookie Betts came in clutch with 3 XBH during the 7th, 9th, & 10th inning as he led the Dodgers’ extra innings comeback win at Miami to surpass Alfonso Soriano for the most career multi-HR games (20) out of the leadoff spot in MLB history
Hot
Mike Trout surpassed Garret Anderson (1,024) for most career Runs Scored in Angels franchise history
Hot
Tampa Bay Rays signed SP Tyler Glasnow to a 2y/$30.4M extension that covers his last arbitration year and 1st free agent season despite missing all of 2022 rehabbing after a 2021 Tommy John surgery
Hot
Oklahoma City Thunder 2022 No.2 overall pick C Chet Holmgren suffered a Lisfranc injury in his right foot and will miss the entire 2022-23 season, making him eligible to win Rookie of the Year when he returns in 2023-24
Hot
Chicago White Sox LF Adam Engel dropped a foul ball out that would’ve been the final out of the game, but instead rookie OF Kyle Stowers hit a game-tying HR 2 pitches later off Liam Hendriks that led to Baltimore’s walk-off win in the 11th inning
Hot
Owners of the last 4 MVPs, Giannis Antetokounmpo & Nikola Jokic battled it out in OT of a FIBA World Cup European Qualifier where the Joker’s Serbians took down the Greek Freak’s national team 100-94 in an epic OT battle
Hot
Dallas Cowboys 8x Pro Bowl LT Tyron Smith suffered a hamstring tear that will likely keep him out for the majority of the 2022 season with a return before December seen as unlikely

DeMar DeRozan was Mr.Clutch last season for the @chicagobulls, his pair of game-winners earn him the #️⃣2️⃣ spot on our TOP 50 Clutch Plays of 2021-22!#NBAClutchWeek | @DeMar_DeRozan pic.twitter.com/rAsg4Y9kM7

🦌 @Jrue_Holiday11 showed off his defensive clamps at the end of Game 5 of BOS/MIL for an impressive clutch defensive sequence! #NBAClutchWeek pic.twitter.com/9eAsiiwjWM

Still not sure how @SaddiqBey even got this shot off! His game-winner over 2 defenders earns him the number 5 slot on the countdown! #NBAClutchWeek pic.twitter.com/ISStVWHshl

"LUKA MAGIC ON A SATURDAY NIGHT"

Claiming the 6th spot on the TOP 50 Clutch Plays, @luka7doncic is immune to pressure! #NBAClutchWeek pic.twitter.com/hcNEnuqiQr

🎯 Cam Johnson pulled up from DEEP for the #TissotBuzzerBeater#NBAClutchWeek | @Suns pic.twitter.com/d2cpydHtMj

There's no better place to shine than overtime.

When the clock is winding down, whose hand do you want the ball in? Let’s take a look at what some of our G League guys did to end the quarter! #NBAClutchWeek pic.twitter.com/pnGDhXqAtY

If the Chef gets cooking, good luck.

The Greek Freak always rises to the occasion in the clutch 🦌

Is that Michael Phelps or @M_Hanny17 at second base?! pic.twitter.com/M7z1KcpyNO

If this is a Wild Card Series preview … we can’t wait for October. #walkoff pic.twitter.com/hrl3kZVlKQ

Steven Kwan goes ALL OUT for the catch!

BETTS IS BEST AT LEADOFF

Los Angeles #Dodgers OF Mookie Betts is the 1st player to have 3 game-tying/go-ahead XBH during the 7th+ inning of 1 Win in MLB historypic.twitter.com/yNzBQn4WtB

The @Marlins keep fighting back.

This game is tied in the bottom of the 9th! pic.twitter.com/7goII2ed5O

HAPP PUT TEAM ON HIS BACK

Chicago #Cubs OF Ian Happ is the 1st player to have 2 multi-run HR account for his team's only 2 Hits during 1 game in MLB historypic.twitter.com/FuRutHWpey

2018: Green Bay Packers QB Aaron Rodgers became the highest-paid player in NFL history at the time with a 4y/$134 million extension ($108M gtd). Green Bay drafted his successor Jordan Love in the 1st Rd of the 2020 draft before his deal even kicked in which led to A-Rod winning 2 straight MVPs and once again becoming the highest-paid ($50.3M AAV) player in the NFL

2002: Denver Broncos K Ola Kimrin drilled a 65yd FG in the preseason which would’ve been an NFL record for the longest FG of all-time if it was an official regular season game

1987: Houston Astros SP Nolan Ryan surpassed 200 strikeouts on the season for the 11th time in his career, setting the MLB record. He extended his record to 15 total seasons with 200+ Ks which still stands today

1977: St. Louis Cardinals OF Lou Brock stole his 893rd career base in a loss to the San Diego Padres, breaking Ty Cobb’s all-time career record. Brock extended his record to 938 but was later surpassed by Rickey Henderson who finished with 1,406 SB, by far the most ever

1974: C Moses Malone became the very 1st player to turn pro directly out of high school in NBA/ABA history, joining the ABA’s Utah Stars. Malone evolving into a NBA Hall of Famer would later influence many HS prospects to skip college and go directly to the pros