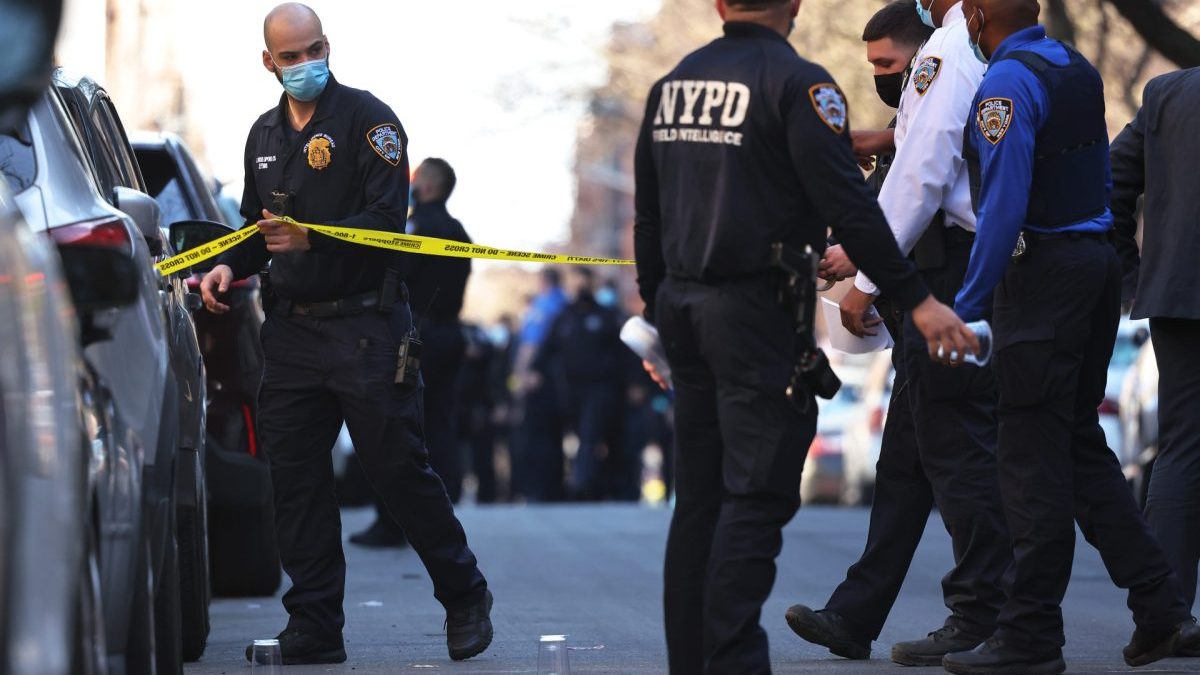 Shocking surveillance videos from a fatal police-involved shooting in the Bronx on Thursday show as NYPD cops wearing plainclothes open fire on an armed suspect who had just fled a stabbing inside a nearby bodega.

The incident unfolded inside a convenience store at East Gun Hill Road and Hull Avenue around 11:30 a.m, when a 29-year-old man walked in before immediately attacking a 21-year-old man, police said.

Surveillance video footage from inside the store, first obtained by the New York Post, shows the assailant lunging at the victim before proceeding to brutally attack him.

The brawl begins to make its way to the back of the bodega, prompting the attacker to pin down the victim, who knocked down a display case of snacks amidst the struggle.

The aggressor eventually stabs the victim several times before fleeing the store. The wounded man can then be seen scrambling to his feet as he then gives chase to his attacker.

Bronx, NY – Two young men fight in a Bodega, one stabs the other and runs to his car, stabbed one follows him and shoots him at point blank range, he runs away as Cops fire at shooter who dies soon after. Terrible turn of events 😞 #Bronx #Bodega #Shooting #crazyvideos pic.twitter.com/Ta7QMdxIOF

Video taken from another CCTV camera, which overlooks the entrance to the bodega, shows the suspect as he gets into a white Lexus parked outside after the stabbing.

The victim, who had just been stabbed multiple times, then runs up to the car and pulls out a firearm, before firing it at what Chief of Detectives James Essig described as “point-blank range.”

Plainclothes Officers Just Happened To Be Crossing The Street At The Time Of The Stabbing, Shootings

Three plainclothes officers just happened to already be crossing the street, and drew their guns as more than a dozen gunshots rang out.

The gunman/stab victim is then hit by the gunfire causing him to collapse to the ground.

Meanwhile, the stabbing suspect can be seen jumping out of the Lexus and fleeing the scene as responding officers cease fire while repeatedly warning the wounded gunman “don’t move!”

#GunViolentAmerica:
‘ #NYC #Bronx Bodega Shooting ‘> @nypost < Sees An Armed Man Fatally Shot By #NYPD Cops Thursday After Getting Involved In A “Violent Struggle” That Spilled Out Onto The Street.▼https://t.co/eEt4kfV6ib
.#NoPlaceIsSafe @MomsDemand pic.twitter.com/Sgx2rZVhYC

The man with stab and gunshot wounds can be heard screaming in agony as a large crowd of onlookers gathers. The officers eventually approach him before kicking away a black handgun from within his reach, and then cuffing him as he begs them not to do so.

The scene on the sidewalk quickly grew tense and escalated into witnesses shouting and pounding on parked cars in rage while attempting to confront the detained triggerman, all while officers’ attempt to keep them at bay.

Young Man Who Was Shot And Stabbed Pronounced Dead At Nearby Hospital, Stabbing Suspect In Custody

The 21-year-old man with the gunshots and stab wounds was taken to nearby Saint Barnabas Hospital, where he was eventually pronounced dead, according to police.

ATF’s Joint Firearms Task Force is on scene with our partners from @NYPDnews in response to a shooting on East Gun Hill Road in the Bronx. For more information, please contact @NYPDnews pic.twitter.com/3MNcCimaTm

Meanwhile, the 29-year-old man who allegedly stabbed the 21-year-old inside the bodega was later found inside an area barbershop before being taken into custody. He was taken and treated at a hospital for a graze wound to the head, the Post reports.

The plainclothes officers involved in the shooting – two of which were detectives and the other a sergeant – are members of the Queens Violent Felony Squad and just happened to be in the area investigating an unrelated issue, Essig said.

The man who was shot dad by police has yet to be identified as of Friday. Meanwhile, no charges have been announced against the 29-year-old stabbing suspect, according to the Post.