Home > News > Woke Corporations Can Abuse Us, But Not for Free 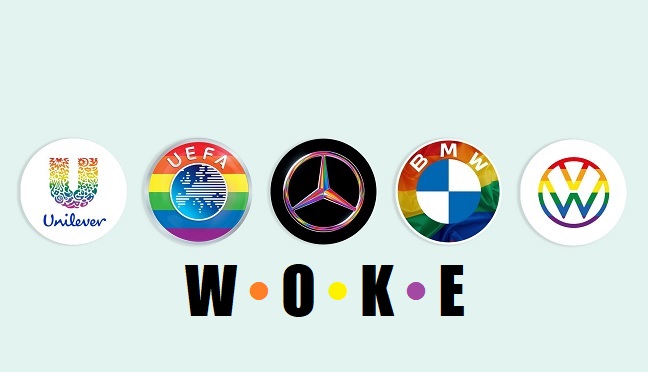 Woke Corporations Can Abuse Us, But Not for Free Last week, Texas put the investment company BlackRock on a list of firms that may not get to manage state pension funds because the firms boycott oil & gas stocks.  BlackRock is trying to get off the list, but the story shows you there are starting to be real-world consequences for companies that go Woke.  It’s a mixed picture right now, with some companies still playing footsie with the Wokemeisters on the radical Left and others leaving the field after being bruised in the culture wars.

Communist-inspired transgenderism is still a corporate favorite.  Disney continues to lead the pack with plans for an upcoming show that will fly the transgender flag and spew the outlandish propaganda that men can have periods, too.  Other companies are not far behind.

Crayola posted an ad featuring a transgender model wearing a chain-link bra over outside clothing in order to normalize transgenderism for the masses.  Then there’s transgender Barbie from Mattel, billboards from Ben & Jerry’s pushing transgenderism in children, donations for transgender surgery for children from the Detroit Tigers, transgender appreciation night from the Milwaukee Brewers, and a book from Pizza Hut telling children as young as four how inspiring it is for boys to dress up as girls and perform for adults in drag shows.  No, this is not normal, and interfering with children’s psycho-sexual development is not healthy for children or society.

Woke corporations are pushing other left-wing causes, too.  Kroger removed pro-American merchandise from its shelves after a left-wing crank complained on Twitter.  American Express pledged another $3 billion for diversity, equity, and inclusion events and programs, bringing the total to $4 billion.  It’s also spending money to support climate change advocacy and illegal immigration.

But in addition to Texas, other people are pushing back.  A former employee sued American Express for firing him because he is white and he objected to the company’s “racially discriminatory” policies.  A new Viewpoint Diversity Score ranks companies on how well they respect freedom of speech and religion.  Microsoft and AirBnB are among the worst.  Another 17 Republican-led states joined Texas in sending a letter to BlackRock accusing the company of putting Woke investment criteria above shareholder returns in state pension funds.  An asset management firm in Ohio promises to take politics out of investing and focus on companies that deliver what they should – business excellence.

People are not only fighting back; they’re winning.  State Farm abandoned its support for a transgender book program for kindergartners in Florida after a national backlash.  Paramount refused to cave in to pressure to censor its old films to conform to today’s Woke standards.   HBO welcomed back Harry Potter author J.K. Rowling despite her stance on transgenderism.  And after PayPal froze the account of Moms for Liberty, a parental rights group – preventing it from receiving donations – Florida announced a new initiative to “prohibit big banks, credit card companies and money transmitters from discriminating against customers for their religious, political, or social beliefs.”

So, as you can see, the price of going Woke is going up. How long will shareholders be willing to pay it?

The post Woke Corporations Can Abuse Us, But Not for Free appeared first on Dr. Rich Swier.

‘If We Can Do It, They Can Too,’ Border Mayor Says of DC, NYC Absorbing Illegal Aliens