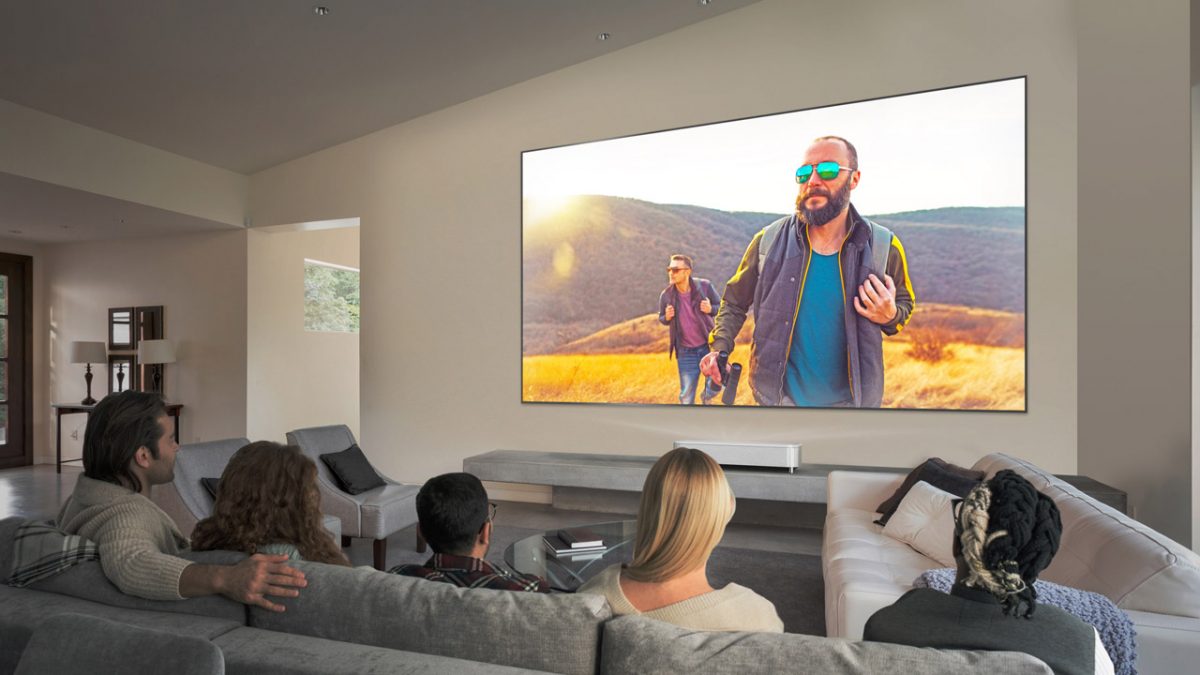 UST (Ultra Short Throw) projectors have become very popular in the past few years but they aren’t particularly new technology. UST projectors have existed for home use since about 2014 and for professional and educational use even longer. But as interest in larger screens at home has grown and more manufacturers have entered the market, UST projectors are becoming a popular alternative to large screen flat panel TVs and traditional home theater projectors.

The main difference between a UST projector and a traditional projector is the throw distance or throw ratio. This measurement defines how far from the wall or screen the projection unit has to be located in order to produce a suitably large image. A traditional “long throw” or “standard throw” projector may need to be placed ten feet or more from the wall to create a 100-inch image. This means it either needs to be placed on a coffee table in the middle of the room (where it can get jostled), on a shelf toward the back of the room, or mounted on a ceiling. And since projectors need power and video sources connected, you’ll need to run one or more cables to the projector, which can get messy.

What’s the Best UST Projector in 2022? Find out Here

An Ultra Short Throw UST projector requires very little distance from the wall or screen to create a large projected image. Many UST projectors can produce a 100-inch diagonal 16:9 image placed just a few inches away from the screen. Some UST projectors, like the Epson LS800 can even create a 150-inch image from as close as 12 inches from the wall. This means the projector can be placed on a stand or shelf at the front of the room, which is typically where your other devices like a Blu-ray Player, streaming box, A/V receiver or sound bar would be located.

What About those Lasers?

Although a UST projector can be powered by a traditional halogen or incandescent lamp, or by LED lights, most of the UST projectors on the market today use a laser-based light source. Because of this and because the whole projection system is a fairly self-contained standalone unit, UST projection systems are also sometimes referred to as “Laser TVs.” Like a TV (and unlike most traditional front projectors), a UST projector typically has some sort of streaming apps on board, as well as a powered speaker system built-in. Some even come bundled with a screen so no additional purchase is required.

As for the lasers, UST projectors either use a single blue laser combined with a yellow phosphor to create a white light source, or three separate lasers: one for each primary color. Lasers are generally superior to traditional lamps as they are brighter, can produce richer colors and last much longer than a standard projection bulb. While a projector bulb may need to be replaced after a few years (2,500-5,000 hours of use), laser lighting units in today’s UST projectors are expected to last 20,000 hours or more. That’s approximately 10 years of average household TV viewing.

These lasers are channeled through an optical assembly, comprised of parts such as lenses, prisms and mirrors to light up one or more imaging panels and project a large full color image on the screen or wall. The actual imaging panels inside a UST projector may be DLP (Digital Light Processing), LCD (Liquid Crystal Diode) or some form of LCoS (Liquid Crystal on Silicon). In addition to the optical assembly, a UST projector uses advanced video processing to prevent geometric distortion or skewing of the image on screen.

Millions and millions of tiny pixels

What About The Sound?

For traditional projectors, sound is about the last thing considered in the design. With a projector that may be mounted behind you or on the ceiling, it doesn’t make much sense to include high quality speakers as the sound location wouldn’t match the picture. But with a UST projector, since the projection unit is right near the screen, and directly in front of the viewer, the projector itself can provide the sound as well as the picture. And, because UST projectors have decent-sized cabinets, some UST projectors actually have pretty good sound systems built in. This also reduces system complexity and cost.

Which UST Projectors Have the Best Sound? Find Out Here

Do I Need a Screen?

While you can actually create an image from a UST projector on a wall, you’ll get much better performance from a dedicated screen. In many cases, UST projectors are installed in living rooms that usually have some sort of ambient lighting. If you project your image on a wall it may look dull or washed out. There are special screens designed for use with UST projectors called “ALR” (Ambient Light Rejecting) screens. As the name implies, these screens cut down on light reflecting off the screen from the sun or room lighting. But they are also designed to amplify the light coming from the projector in order to maximize the brightness and contrast of the moving image. Also the black border around a projection screen helps the image to “pop.”

Get Our Recommendations for Best UST Screens for 2022

Is a UST Projector the Perfect Large Screen TV?

Lest you think that UST projectors are ideal display devices, you should know that they do involve some trade-offs. You will generally get better image quality (a brighter picture, with deeper blacks and richer more saturated colors) from a large flat panel OLED or QD-OLED TV. But flat panel TVs currently max out somewhere around 100 inches, and the large ones are still super expensive. A UST projector can give you a 120-inch image, or even larger, for a much smaller investment. And this creates a more immersive and cinematic viewing experience.

So if you’re Jonesing for a really large screen TV but don’t have the budget for a 100-inch flat panel or the patience for setting up a traditional front projector, the latest crop of UST projectors is definitely worth a look.

The Hot Mess of Fair Use for Music Educators

T.H.E. Show 2022: Hi-Fi Shows Are Back…So Why Are Manufacturers Making the Same Mistakes