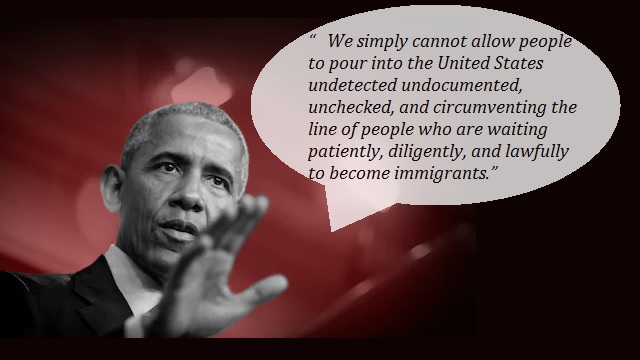 Are you ready for your quiz?

“If making it easy to be an illegal alien isn’t enough, how about offering a reward for being an illegal immigrant?  No sane country would do that.”  — Harry Reid.

“It is wrong and ultimately self-defeating, for a nation of immigrants, to permit the kind of abuse of our immigration laws we have seen in recent years and we must do more to stop it.”  — Bill Clinton.

“I voted numerous times when I was a senator to spend money to build a barrier to try to prevent illegal immigrants from coming in, and I do think you have to control your borders.” — Hillary Clinton.

“We simply cannot allow people to pour into the United States undetected undocumented, unchecked, and circumventing the line of people who are waiting patiently, diligently, and lawfully to become immigrants.”  — Barack Obama.

Don’t believe me?  I put the video on the website.  There’s no denying it.

Last question:  What do all these people have in common?  They’re all top Democrats who said these things in the past and they belong to a party that has now become the Open Borders Party because it thinks that’s the way it will take, and hold on to power, in America, permanently.

The head of the Open Borders Party is joe Biden who, when he was a senator, joined Barack Obama in voting for the Secure Fence Act of 2006 which authorized the construction of 700 miles of fencing and vehicle barriers on the border.  But one of the first things Biden did in the Oval office was to issue a proclamation stopping the construction of Trump’s border wall.

But now it’s time for their quiz.  I hope they’re ready.  Here’s what I want to ask:

Bill Clinton, almost 5 million illegal aliens have poured into the country since Joe Biden took office.  How do you suggest Joe Biden stop it?

Hillary, given that Joe Biden stopped construction of the wall, do you blame Texas for busing illegal aliens to New York and D.C. and increasing the number?

Chuck Schumer, is it progress in your view that Joe Biden’s open borders policies, that you have done nothing to oppose, led to the seizure of 1.2 million fentanyl pills by border agents last week and there’s now enough fentanyl to kill everybody in the country?  How do you define ‘progress’?

Finally, for Barack Obama: Did you vote for the Secure Fence Act in 2006 because you believe in the wall or because you just wanted to get into power?

I close with something from another top Democrat, Dick Lamm, former Governor of Colorado.  He said on video in 2004, if you want to destroy a nation, start with no longer enforcing its immigration laws and turning it into a multicultural country full of people who won’t assimilate.  He was being facetious.  Too bad his party took him literally.

‘No Reason To Be Fearful’: Dem Senator Tells Taxpayers Not To Worry About IRS Expansion